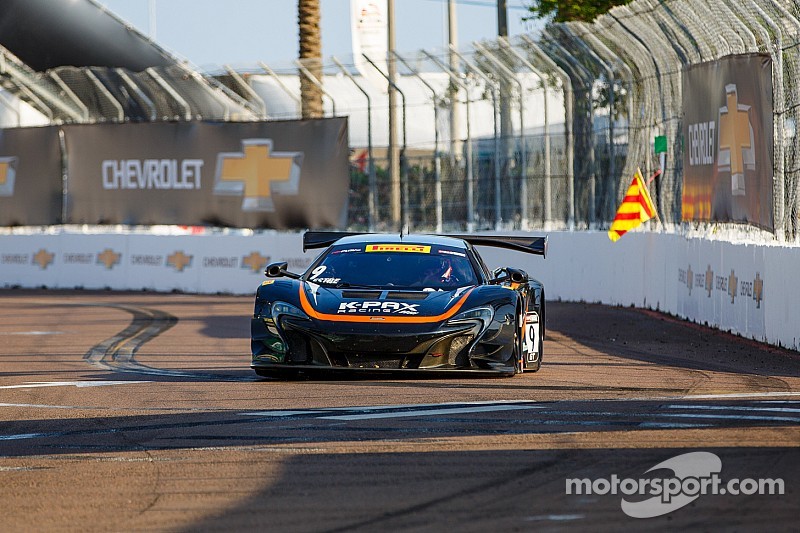 McLaren GT factory driver Kevin Estre finished 3rd in Round 4, the second race of the double header of the weekend.

St. Pete, Fla. - After an action filled weekend at the Pirelli World Challenge Grand Prix of St. Petersburg, K-PAX Racing with Flying Lizard motorsports is going home with their second podium finish of the 2015 race season. McLaren GT factory driver Kevin Estre finished 3rd in Round 4, the second race of the double header of the weekend.

An incident at the rear of the field during the standing start of Round 3 brought out a lengthy yellow flag. After starting in 2nd position, Estre was able to earn a 5th place finish, despite mid-race contact from another competitor. Driver Robert Thorne suffered contact early on and was spun, but able to recover and rejoin the field with no damage. Thorne fought his way back to 24th position as the checker flag came out.

We've still got a bit of work to do on the handling of the new McLaren but we are improving every race.

The standing start of Round 4 was clean and contact free. With a strong launch off of the starting line from 4th position, Estre in the #9 McLaren 650S GT3 was able to take a position in turn one, then a lap later, climb into second place where he remained for a majority of the race. Ultimately, Estre finished third, earning his second podium in four races. Thorne started Round 4 from the 15th position. The race was again hampered by a lengthy caution as safety crews worked to clean the track of debris. Once back under green, Thorne received a drive through penalty for contact while trying to make a pass, resulting in a 22nd place finish.

The team entered the weekend with the GT driver championship points lead, and remains close in the battle, heading into Round 5. The Toyota Grand Prix of Long Beach will host the next Round, another temporary street circuit in the heart of downtown. The event will take place Friday, April 17 through Sunday, April 19.

Darren Law - Program Manager: As we predicted, it was a crazy event. Anytime you run on a temporary street circuit your chances increase for accidents. Unfortunately, the crashes that occurred caused lengthy yellow flags. We are happy for Kevin. He had a great run and finished third in the second race, so we will leave here with a reasonable amount of points and most importantly both cars in good condition. Unfortunately for Robert, he had some incidents on track that took him out of the running but he had the speed to run at the front, so we will regroup and head to Long Beach. As we continue to evolve with the joining of K-PAX Racing and Flying Lizard, we learn every weekend, the cars are fast and show great potential, we're looking forward to the next race.

Kevin Estre - Driver of #9 K-PAX Racing with Flying Lizard Motorsports McLaren 650S GT3: "Today was definitely better than yesterday and we had a better launch on the start. I think we lost a couple positions off the line, but I made a move on the outside of turn one, which was good because I moved up to P3. After the first lap, Catsburg braked a little late in Turn 1, so I was able to pass him on the inside and gain another position then there was a long safety car.

After that, the car was a lot faster than the Ferrari of Berretta, but it's just impossible to pass here. It's really tough, and they have good straight line speed, but I did my best to keep pushing hard. Later in the race Catsburg put pressure on me and I braked a little late in the first corner, unfortunately he was able to get back by me. I was having a small issue with braking in the first corner at the end of the long straight, once he got by me I was able to hold the 3rd position to the end.

We've still got a bit of work to do on the handling of the new McLaren but we are improving every race. It was a tough race but we came away with good points and a podium finish. There's still a long way to go in the season and I'm happy about the result. The team gave me a great car for both races. We've got to improve on the long runs, and then it will be perfect."

Robert Thorne - Driver of #6 K-PAX Racing with Flying Lizard Motorsports McLaren 650S GT3: "Frustrating day in the #6 car. Luckily, the car was running very strong and was really quick on track. I didn't really have any major handling issues, but with a bad start and worse restart, we just weren't able to be in the position we needed to be in. We don't have the straight line speed to make the passes, so we really need to start out front and stay there. Hopefully we can be in a better position after qualifying next race, that will give me the opportunity to fight up front."