Ken Stout Racing debuts their Scion FR-S on the streets of St. Petersburg

"There is no other FR-S like this one in the world. We have the only FR-S utilizing the TRD supercharger," said Ken Stout, KSR Team Principal.

Brownsburg - Ken Stout Racing (KSR) debuted their Scion FR-S during Rounds 1 and 2 of the Pirelli World Challenge GTS Championships on the Streets of St. Petersburg, March 22-24. 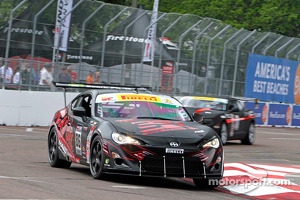 The weekend was effectively a test session for driver Robert Stout, the KSR team and the newly developed race car as the FR-S had not been tested prior to the St. Petersburg event.


While it was a tough weekend competition-wise for the team, overall the car was a huge hit with fans. The paddock was so full of enthusiastic fans wanting to see the FR-S that the team had to place a stanchion at the entrance to their paddock space to keep them at bay while the crew was at work.

“It was great to be back at St. Pete with the Pirelli World Challenge series,” said Robert Stout. “The track is one of my favorites and I’ve wanted to come back since we were on the podium here in 2010.

I wish we could’ve tested some first but to have been at St. Pete with our own program was very exciting and we are looking forward to the season. We love this series and the walk-up fan base is unbelievable.”


With a short time window and a high amount of development required to get the FR-S race prepped and ready for the start of the season, the odds were stacked against KSR making St. Petersburg.

KSR was unable to test before the event as getting race parts in hand for a car that was just released in June 2012 proved to be a challenge.

Despite full-on fabrication work that took place as late as 4 am Friday morning March 22, the KSR team persevered and fielded the car for the first series practice session of the 2013 season a few hours later.


Both the first and second practice sessions would end early because of ABS issues. Electron Speed’s Eric Schieb quickly diagnosed the issues and Co-Crew Chiefs Eric Arms and Mark Canup went to work and eliminated them for the rest of the weekend.

The qualifying session late Friday afternoon led to yet another issue that caused a transmission failure while downshifting to 3rd. The fly by wire system resulted in a slow responding throttle pedal resulting in a chipped 3rd gear.

Again Schieb diagnosed the problem and the quick fix was for Stout to slow his shifts down allowing the engine to match revs with the transmission.

The car was prepared with a new transmission for the first race of the season on Saturday. Unfortunately a portion of the new wire harness supplying a ground to the number 4 injector had rubbed against a sharp edge on the lower rear of the engine.

This caused the injector to open and it filled the engine with fuel on the way to pre-grid – so much fuel that it was dripping out of the header resulting in a hydraulic situation and an inability to start the race.

While disappointing the issue was again addressed immediately by the team and the car was prepared for Sunday’s race.

All of the hard work by the team paid off with some early encouraging results right from the start of Sunday’s race. Off of the standing start, Stout passed six cars before Turn 1 and was a contender for the "Best Standing Start of the Race" award.

Footage from the on-board camera also revealed the car’s ability to out-break and out handle competitor cars throughout the tight 14-turn 1.8 mile street course.

Unfortunately the team was dealt another tough blow when high crankcase pressure resulted in an engine bay filled with oil. The pressure was high enough to force the oil dip stick out of its tube and everything under the hood was covered with oil.

The race weekend was over but valuable information was gained.

The car was back at the team’s headquarters in North Carolina by 5:30 am Monday, March 25th and preparation for the April 19-21 Toyota Grand Prix of Long Beach began.

“We learned much about this cutting edge car at St. Petersburg,” said Ken Stout, Team Principal. “First I have to thank our incredible crew! Eric Arms and Mark Canup worked till 5 am for about seven days straight; I don’t know how they did it.

There is no other FR-S like this one in the world. We have the only FR-S utilizing the TRD supercharger and there is a lot to be learned.

We work closely with Magnuson technicians and Motec representatives have said this is the most complex engine they have ever worked with. It’s safe to say we are on the very leading edge of technology.”

“We were able to see the car handles and stops as good as any competitor cars in the GTS class,” added Stout. “Throttle response is being addressed and a more compliant transmission for racing is being installed.”

“The team is very excited about the potential of this car and is very confident we will be a strong contender when all is said and done,” said Stout. “This is obviously a major project – we are completely developing a brand new platform for racing.

Reliability will be the first goal and once that is achieved we feel comfortable that we have a top 10 car in an extremely competitive class. We will then chase speed to crack into the top 5 and eventually the coveted podium and win.”

KSR thanks Drake DeVore of Motec and Eric Schieb of Electron Speed for their efforts to help field the car. DeVore and Schieb spent days writing info to the ECU that will provide valuable data to the team and its partners.

Ken Stout Racing looking ahead to races at Mid-Ohio