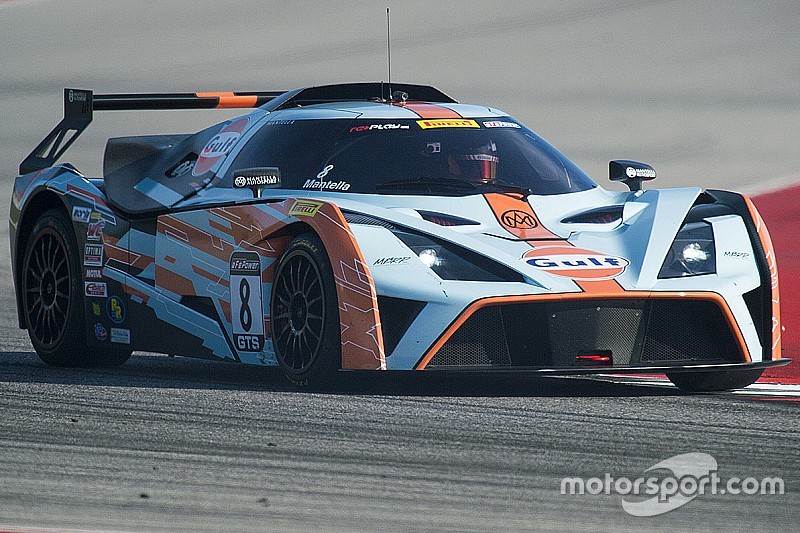 Mantella, the Canadian importer and distributor for the KTM X-Bow, started sixth on the grid and quickly moved towards the front, and by Lap 2 had slid by 17-year-old Harry Gottsacker in the Ginetta.

The X-Bow then moved in on polesitter Scott Heckert in the Racer’s Edge SIN R1 and on Lap 4 made the pass and started pulling away from the opposition.

Mantella then had to survive a restart at half distance following a full-course caution, and initially he stumbled as Gottsacker got him. However,  a lap later the KTM was back in front, and in control and Mantella drove to a 2.3sec victory over the similar car of Brett Sandberg, the points leader. Mantella also took fastest lap, earning him pole for Sunday’s race.

Said Mantella: “This is my first pro win and this track is such a great place to race. I had a pro driver on my tail and the track conditions were spectacular. As I crossed the finish line, I had tears in my eyes. I was thinking about everybody who helped me get here.

“The start was wild today as I split two cars into turn one and didn’t lift off the throttle. It was just a matter of time until I could get the lead.  I had more speed than those guys in the corners. This car is spectacular right out of the box.”

Sandberg, who started fifth in the ANSA Motorsports KTM X-Bow, extended his GTS point lead after his nearest rival, Lawson Aschenbach who could manage only seventh in the Black Dog Speed Shop Chevrolet Camaro.

After Gottsacker slid off track with two laps to go, it was Parker Chase, the 15-year-old high school sophomore who grabbed the Ginetta marque a podium finish by staving off a great challenge from Heckert. Behind Heckert ran Jeff Courtney in the Kenda/JCR Motorsports Maserati Gran Turismo.