“We made some changes to the car to make it fast over a couple of laps, and it worked,” O’Connell said. “Even though we didn’t test here, I have run a thousand laps in my head and about five hundred laps since yesterday. I did what I had to do to lay a lap down, and we got it done. This track requires the driver to be soft and smooth. My engineer said before qualifying to use slow hands. Make slow soft inputs into the car and it will reward you. We had a great qualifying car. We will have to make changes to make it a great race car.”

The strong performance helps ease the sting of a tough finish from Round Three, at Long Beach, where O’Connell’s engine expired under caution on the last lap following a puncture of the cooling system, robbing him of victory.

James Sofronas, of Villa Park, Calif., turned a lap of 1:33.587 (88.482 mph) in the 17-minute qualifying session, just 0.068-second off the pole. The time was good enough to put the No. 14 GMG/Mobil 1 Audi R8 second on the grid, and is the third-consecutive front row-start for the Championship point leader.

Randy Pobst, of Gainesville, Ga., will start Saturday’s race inside row two. Pobst, in the No. 6 K-PAX Racing Volvo S60, turned a time of 1:34.087 (88.003 mph), and hopes to use his machine’s all-wheel-drive to his advantage by getting a good jump off the line, and up the hill on the approach to Turn One.

Bret Curtis, of Westlake Village, Calif., completed the second set of teammates starting Saturday’s Round Four in the top five positions. Curtis, in the No. 32 United Steel Supply/Spectra Resources Audi R8, will look to work together with Sofronas to get to the front early on. The fifth-place qualifying position is a career-best for Curtis. 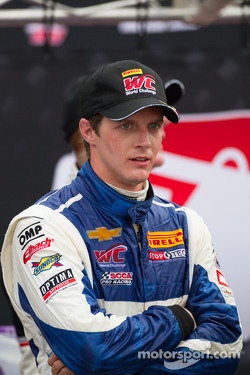 In his flat black No. 10 Blackdog Speed Shop Chevrolet Camaro, Aschenbach has been flat-out fast this weekend, earning the GTS Motul Pole after also setting the quickest GTS time in Thursday’s practice. Aschenbach’s time of 1:40.400 (82.470 mph) was 0.4-second clear of the second-place car of Mark Wilkins.

“Our Chevy Camaro has been fast all weekend,” Aschenbach said. “We expected to be able to compete here. Coming and testing was a huge benefit to us. Not a lot of teams came [to the test]. I think that’s the big difference right now. We’ve really got a handle on the track. It’s going to be a long race. We’re a very heavy car and tire conservation is going to be very important for us. We’ll see what happens. I think we have a good car and a good shot at it.”

The No. 42 Acura/HPD/RealTime Racing Acura TSX will line up third with Peter Cunningham, of Milwaukee, Wis., behind the wheel. Cunningham was able to turn a quick lap of 1:40.904 (82.058 mph), around the hot Austin circuit for his second-consecutive third-place qualifying effort.

Round Four of the Pirelli World Challenge GT and GTS championships is set to take the lights for a 27-lap or 50-minute race Saturday at 1:10 p.m.(CDT). Round Five of the doubleheader event is scheduled for Sunday at 1:15 p.m.(CDT). All races will be streamed live at www.world-challengetv.com and aired on the NBC Sports Network June 16 at 5 p.m. (EDT).

AUSTIN, Texas (May 17, 2013) – Ryan Winchester, of Mason City, Iowa, scored his second career Pirelli World Challenge Touring Car Pole and led a pair of teammates to the top of the time sheets on Friday at Circuit of The Americas. Fifteen-year-old Ernie Francis, Jr., of Davie, Fla., scored his first career Touring Car B pole in the same session to set the grid for Saturday’s Round 1 Pirelli World Challenge Cadillac Sports Car Challenge TC/TCB race.

“Qualifying got off to a good start,” Winchester said. “The order was based off the highest returning driver in the (2012 season) points, so I got to go out first. I got my two clean laps and ended up putting the fastest time of the session down. I get to start out front, which is going to be huge this weekend.

“For the races I expect it to be a hard-fought battle between the three (Compass 360) team cars. The Volkswagen’s have shown to be fast, but we’ll see what happens in the race. We’re looking for a one-two-three finish and that’s what we’re expecting to get.”

Brett Sandberg, driving the No. 70 Ultimate Racing/HPD Honda Civic Si, snuck into the top three late in the 30-minute session with a time of 1:46.916 (77.444 mph) on his seventh lap. Sandberg’s lap completed the qualifying sweep for Compass360 Racing.

Next in line and starting on the outside of row two is Conner Ford, driving the No. 30 Emich VW/StopTech/3Zero3 Motorsports Volkswagen GTI. Ford posted his qualifying marker of 1:47.061 (77.339 mph) on the second lap of the session, then pulled to pit lane soon after.

Francis, Jr. scored his first career Pirelli World Challenge pole position with a lap of 2:00.971 (68.446 mph) in the Series’ first visit to the Austin circuit. The No. 98 Hydraulic Jeans MAZDA2 will lead a field of 21 TCB cars to the green flag on Saturday.

“In the beginning I was fighting with the Minis a little bit,” Francis Jr. said. “When they finally pulled into the pits, I got some clean air on track, and was able to pull out a two minute flat.”

“I just want to try and get a top-three on Saturday and Sunday, but I’m really hoping for a victory. If I keep my head straight, and don’t look at my mirrors too much, I think I can come out on top.”

Just like Thursday’s practice, four MINI Coopers follow the Mazda of Francis on the grid. Starting on the outside of the front row is the No. 37 MINI Financial Services MINI Cooper of Robbie Davis, whose lap of 2:01.487 (68.155 mph) left him 0.516-second behind Francis.

Round One of the Pirelli World Challenge Touring Car and Touring Car B-Spec championships is set for a green flag, in a rolling start, at 8:40 a.m. (CDT), for a 25-minute race. Round Two immediately follows, scheduled to get the green flag at 9:20 a.m. for a 25-minute race. Sunday’s Round Three is scheduled to leave the grid from a standing start at 8:20 a.m. All races will be streamed live at www.world-challengetv.com

Aschenbach triumphs on his return to GTS

Horner disagrees with way Wolff "roasts his own team"