In GT, Palmer, in the No. 21 GMG Racing Audi R8 Ultra started on pole after setting the fastest lap in Saturday's Round 3 race. But off of the standing start, the second place qualifier Anthony Lazzaro of Atlanta, Ga., in the No. 61 R. Ferri Motorsports Ferrari 458 Italia GT3 won the drag race to the first turn to take the early lead. Palmer followed in behind, with Johnny O'Connell, of Flowery Branch, GA, in the No. 3 Cadillac Racing Cadillac CTS.V.R after that.

After the Lap 7 restart, Lazzaro, Palmer and O'Connell held position for the next 22 laps of the 30-lap race, with Palmer challenging for position a number of times only to be denied by the Ferrari driver.

O'Connell waited in the wings for the two main combatants to make a mistake, but fell out of touch with the two leaders as lapped traffic came into play. Nick Mancuso, of Chicago, in the No. 16 R. Ferri Motorsports Ferrari 458 GT3 Italia soon picked up the challenge for third battling O'Connell near the end of the race. 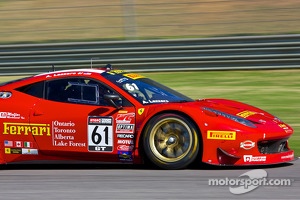 Drama ensued on the final lap as Lazzaro put two wheels on the grass coming out of the Turns 10 and 11 left and right sequence, giving Palmer an opportunity to go side by side and eventually pass the Ferrari driver heading into Turn 12. Palmer carried the momentum to the checkered for the overall win.

"It went accordingly to plan. We didn’t get off the line as well as we had hoped," said Palmer. "But I thought if we pressured throughout the race, we’d have the better car at the end. The tires are awesome and the brakes don’t fade. It was an absolutely perfect performance by the team. I pressured Lazzaro enough to make one small mistake and I capitalized."

"The car was perfect today. But it was a tough race," said Lazzaro. "I made a bit of an error. I had a bit of an advantage through the chicane, but Andrew had the advantage the last section of the track before the flag. I pushed a bit too much, went into the marbles, went wide and that was it. Andrew did a good job and deserves it, but my team deserves it after giving me such a great car."

Behind Palmer and Lazzaro, O'Connell finished third, with Mancuso in fourth. Rounding out the top 5 was Mike Skeen, of Charlotte, N.C., in the No. 2 Hawk Performance Audi R8 LMS Ultra.

Hahn, in the No. 0 Reiter Engineering Lamborghini Gallardo FL2 started 10th on the overall GT grid and finished 10th overall, never relinquishing the lead in the GT-A class driving a mistake-free race. Michael Mills, of Angleton, Texas, in the No. 41 EFFORT Racing Porsche GT3R finished 12th overall and second in GT-A, while Tim Pappas, of Boston, Mass., in the No. 54 Black Swan Racing Mercedes AMG SLS GT3 finished 13th overall and third in class.

"Yes I’m very happy. We had some bad luck in the engine at St. Pete," said Hahn. "Then I wasn't able to race at Long Beach. Yesterday we had a problem and made a mistake. Today I’m here, taking first place, I’m very happy. I hope to continue putting up good results in the championship."

In GTS, Baldwin started from pole after setting the fastest lap in Saturday's Round 3 race, and won the race to the first turn leading the second and third place qualifiers, Nic Jonsson, of Buford, Ga., in the No. 36 Kia Motors America Kia Optima and Lawson Aschenbach, of Palm Beach Gardens, Fla., in the No. 1 Blackdog Speed Shop Chevrolet Camaro.

From there Baldwin led flag to flag and was never challenged by Jonsson and Aschenbach who waged battle the entire race with Andy Lee, of Colorado Springs, Col. in the No. 20 Crown Seven/BestIT Chevrolet Camaro joining the fray from his fourth position. Aschenbach was on Jonsson's bumper the whole way but could not find a way around Jonsson, who never made a mistake and drove a consistent line.

"This is for the crew. All the work to get us to this point," said Baldwin. "Yesterday we had a rough race and there was more work to do last night. We changed the setup, and today’s car was a completely different car. I’m so proud to be able to do this for the team. It’s just fantastic. I want to say thanks to all the fans and everyone who rooted for us, and never gave up on us. I've been racing for a long time, but this one is up there." 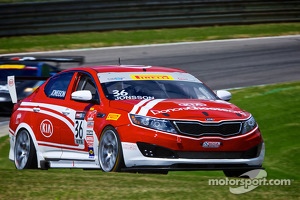 "I didn’t have anything for Jack (Baldwin) and settled in," said Jonsson. "I tried to protect for second place. But it was great, clean racing with Lawson (Aschenbach) and Andy (Lee). I completely lost my front tires in the last 10 minutes. Had nothing coming off. But being fair racers, it worked out that way. Second on the podium, with Mark (Wilkins) winning yesterday is great. The team built a great car and we’ve made it competitive."

Behind Baldwin, Jonsson, Aschenbach was Lee in fourth and Mark Wilkins, of Toronto, ON in the No. 38 Kia Motors America Kia Optima.

After Barber, Lazzaro leads the points in GT with 439, O'Connell is second on 393 and Pilgrim is third with 376. In GT-A, Mills leads with 225, while both Pappas and Hedman have 205. In GTS, Wilkins leads with 376, Jonsson is second with 363 and Baldwin is third on 360. Points are provisional until posted as final.

GT, GT-A and GTS teams and drivers now head to Detroit and the Cadillac V-Series Challenge at Belle Isle, part of the Chevrolet Detroit Belle Isle Grand Prix, May 30-June 1 for Rounds 5 and 6 of the Championships.

Stacy’s got it going on at Barber.