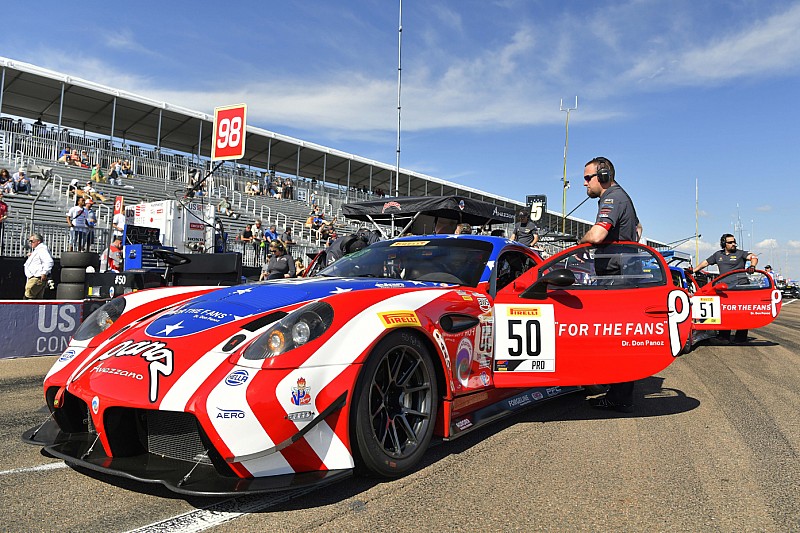 Ian James won the Pirelli GT4 America Sprint opener with a last-lap pass for victory on the streets of St Petersburg in Florida on Saturday, an event marred by a brutal crash that befell Nicholai Elghanayan.

From pole position, Spencer Pumpelly’s Porsche 718 Cayman CS MR led the 20-car grid on the charge to Turn 1, where Jade Buford’s Ford Mustang swept around the outside of him and grabbed the lead into Turn 2.

After a lengthy battle, James found a way past Robinson for third just before half distance.

A nose-to-tail clash between Ian Lacy (Mustang) and Am class leader Jarett Andretti sent the latter backwards into the wall at Turn 1, causing a full-course yellow as Andretti’s McLaren appeared to break an oil cooler, belching smoke in a worrying fashion and requiring a major clean-up operation.

That cost Buford his substantial lead, and he restarted out front with 16 minutes on the clock. But Buford then outbraked himself and sailed straight on at Turn 1, allowing Pumpelly into the lead and dropping to last. But the race was neutralised again as Elghanayan crashed heavily at Turn 3 when his left-rear wheel (shortly after its wheelnut) flew off, sending him hard into the concrete wall at high speed and causing a red flag.

Thankfully, Elghanayan was able to walk away after he was extracted from his wrecked machine.

The race was restarted as a nine-minute sprint to the finish, with Pumpelly heading James, Robinson, Cooper and Lacy.

James pressured Pumpelly in the closing stages, almost finding a way past at Turn 1, but Pumpelly just held on. But on the final lap, James made a move stick along the start/finish straight to grab the victory, with Pumpelly keeping second ahead of Robinson.

Alan Brynjolfsson won the Am class in fifth overall in his Park Place-run Porsche.

Erstwhile leader Buford – who is yet to confirm whether he’ll race the full season in his PF Racing Mustang – restarted in 15th but made no progress forwards, lapping well off his previous pace.