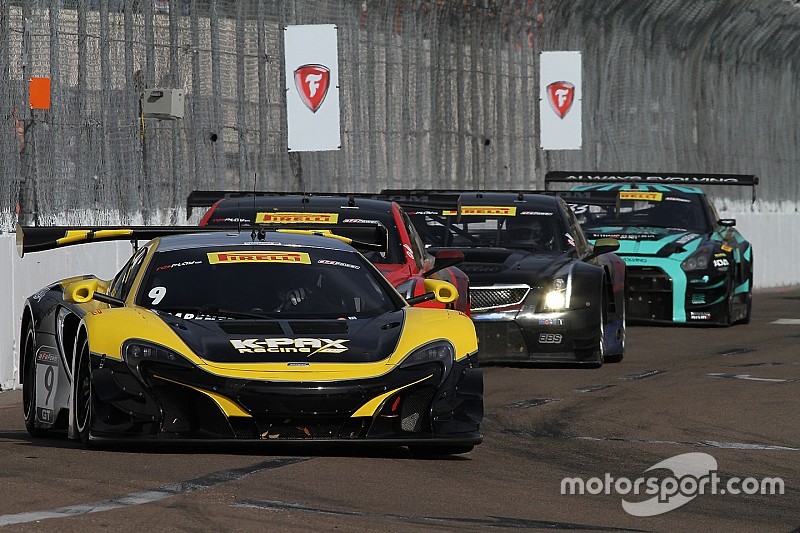 The 30-minute qualifying session (divided into two 15 minute run groups) saw the top 13 cars based on the combined fastest times from Friday’s and Saturday’s practice sessions take to the track first for a 15-minute session.

Included in that group were Parente and Colin Thompson, in the K-PAX Racing McLarens, Johnny O’Connell in the Cadillac ATS-V.R, Andrew Davis, in the No. 76 Phoenix Performance Porsche 911 GT3-R, Patrick Long and Michael Lewis in the EFFORT Racing Porsches, Martin Fuentes in a Scuderia Corsa Ferrari 458 Italia, Kyle Marcelli in CRP Racing's Audi R8 LMS, Ryan Eversley in his RealTime Acura TLX-GT3, Andrew Palmer in the Absolute Bentley Continental GT3, and JD Davison in the Nissan/GT Academy Nissan GT-R.

The fastest time set in the second group was Cindric’s 1:19.969 good for 10th on the grid. The second session was red flagged briefly with five minutes remaining as Cindric brushed the tire wall through turn 1 and was initally unable to restart the car.

Of note, Michael Cooper, the GT championship points leader coming into Long Beach did not post a qualifying time due to an engine breathing issue with his No. 8 Cadillac Racing Cadillac ATS-V.R.

“It’s a great feeling to be on pole position,” said Parente. “We were so close in St. Petersburg, and we’ve been performing well all the time. This is great for K-PAX Racing and Flying Lizard Motorsports. I’m happy to be in this position on a street track.

"I have raced on many street circuits around the world like Monaco and Macau. So I have some experience on streets. But this is my first ever appearance at Long Beach. I have my family here this weekend so winning would be very special. But Sunday’s race will be very tough.

"However, starting on the front row is the best place to be here at Long Beach.”

Sunday’s Round 5 race, scheduled for green flag at 10am Pacific/1pm Eastern. It will be shown on CBS Sports Network, at 11am Pacific/2pm Eastern.

Crash rules out Fogarty and GAINSCO/Stallings from Long Beach

Parente guides K-PAX McLaren to victory, as Cadillac is penalized