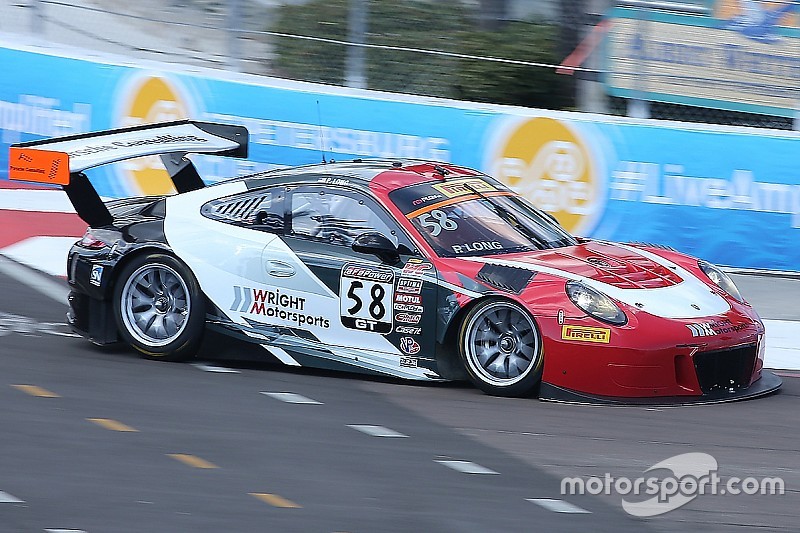 Porsche’s Patrick Long won round two of the Pirelli World Challenge GTs at St Petersburg on Sunday, benefiting when yesterday’s race winner Alvaro Parente locked up and ran wide at the first corner.

Poleman Alex Riberas (Ferrari 488) led the field to the green flag, but was immediately swamped. Reigning champion Parente took advantage to jump to the front in his McLaren, but locked his wheels and ploughed straight on at Turn 1.

That handed the lead to Long from the Cadillac of Johnny O’Connell and the recovering Riberas.

GTA runner Alec Udell’s Porsche leapt to fourth from 11th on the grid, ahead of Adderly Fong’s Bentley. Parente recovered in sixth, and quickly moved past Fong (who would retire soon after) for fifth.

Parente passed Udell with a superb move at Turn 14 on lap six, but was already a couple of seconds behind Riberas.

Udell tumbled backwards after Michael Cooper’s Cadillac passed him at Turn 10. Udell tried to hang on through Turn 11, but ran wide and promoted the McLaren of Bryan Sellers to sixth, ahead of James Davison (Aston Martin) and Daniel Mancinelli (Ferrari).

Riberas got caught up with a backmarker, which allowed Parente to close right up to the third-placed Ferrari at half distance, but Riberas then pulled away again and closed in on O’Connell.

Up front, Long pulled well clear as O’Connell, Riberas and Parente fought out the podium positions.

Parente attempted his sneaky Turn 14 move on Riberas, just after another backmarker bunched them up, but found the Spaniard a tougher nut to crack.

Davidson was a late retirement from seventh when he pulled off before Turn 11, and that caused a full-course yellow – after which there was a two-lap sprint to the finish.

At the restart, Long led O’Connell, Riberas and Parente. Cooper shoved Parente wide at Turn 3, briefly getting ahead, only for Alvaro to return the compliment at Turn 4.

Mancinelli grabbed sixth with a robust move on Sellars at Turn 1, with Udell snatching seventh.

Long held his nerve to win by 1.4s from O’Connell and Riberas, with Parente holding fourth from Cooper and Mancinelli.