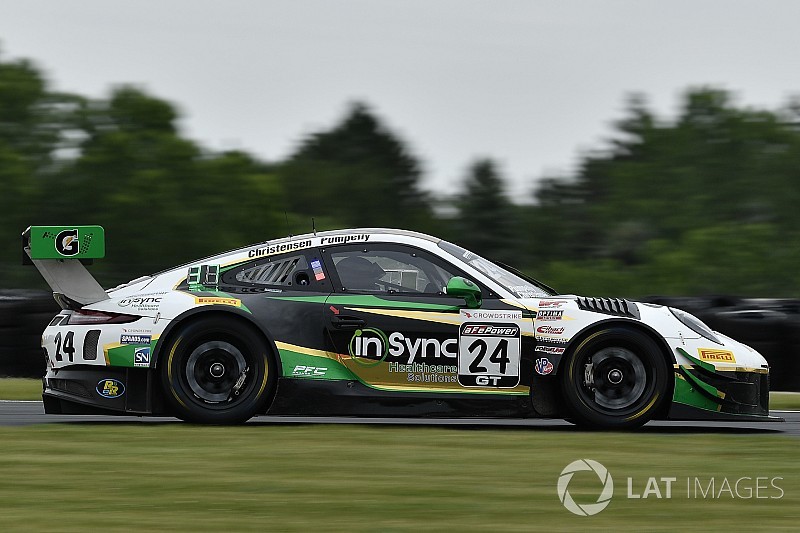 Alvaro Parente hurtled his pole-sitting Bentley Continental into the lead at the start leaving Scott Hargrove’s Pfaff Motorsports’ trailing, but another Porsche, the Alegra car of Michael Christensen ran up the inside of him to grab the lead at Turn 6. Behind these two, Daniel Mancinelli’s TR3 Ferrari 488 led Hargrove and Toni Vilander in the R.Ferri Motorsport Ferrari, with Daniel Morad sixth in the CRP Racing Mercedes-Benz AMG GT ahead of Rodrigo Baptista in the second Bentley.

A yellow for a GTS collision between Alan Brynjolfsson’s Volt Mustang and Jason Bell’s GT4 Audi R8 brought out the first yellow of the race, and allowed everyone a do-over.

The restart with 17mins to go saw Christensen jump his pursuers with ease and they remained in line until with 2min30sec to go, Morad pulled into pitlane with a smoky Mercedes, handing sixth to Baptista.

Christensen clinched victory by 2.2sec over Parente who only just held off Mancinelli after they got tangled in lapped traffic in the final two laps. Vilander was less than 0.4sec behind Hargrove at the checkers as they squabbled over fourth, while nine seconds behind was Baptista.

The GT Amateur battle was (again) ridiculously close, and this time it was Parker Chase in the TruSpeed Autosport Audi who got the win over Martin Fuentes’ Squadra Corse Garage Italia Ferrari 488 by all of 0.008sec, the pair seventh and eighth overall.

In GTS, Lawson Aschenbach worked his Blackdog Speedshop Chevrolet Camaro hard to try and stay at the front of the pack, but at the start of the third lap the SIN R1 of Harry Gottsacker and the PFR Ford Mustang of Jade Buford demoted him to third. Soon, Ian James’ Panoz and James Sofronas’ GMG Audi R8 would also get ahead of the Camaro, with James then moving up to second in class ahead of Buford.

Following the caution caused by the Brynjolfsson/Bell clash, the frontrunners in class largely behaved themselves, but with 11mins to go, James outbraked Gottsacker into Turn 5 to grab the class lead. Two laps later, Sofronas got more heavily into the mix, passing Buford’s Mustang for third and moved onto the tail of the lead battle. That appeared to spur Gottsacker into redoubling his efforts to get back around James’ Panoz. However, Sofronas got around the outside of the SIN at the bottom of the Carousel on the penultimate lap, and the Audi driver did his utmost on the final lap to displace. He would fall short by less than half a second, but held off Gottsacker by a quarter-second.