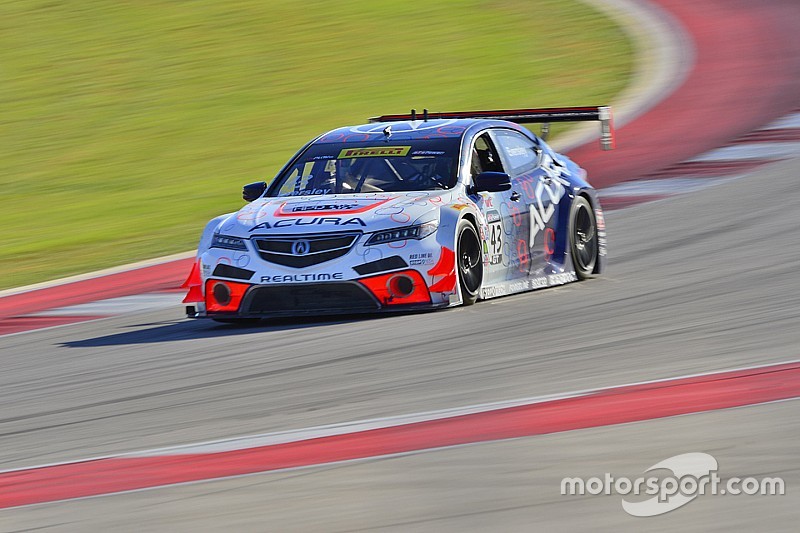 Austin, Texas – RealTime Racing showed its mettle throughout the 2016 season-opening Pirelli World Challenge weekend at the Circuit of the Americas, with Ryan Eversley scoring a pair of 10th place finishes for the Acura Motorsports effort, despite contact in Saturday’s race and a spin in Sunday’s finale; while teammate Peter Cunningham fought back after handling issues on Saturday and being tapped into a spin early in Sunday’s race.

After qualifying eighth in his Acura TLX-GT for Saturday’s first of the weekend’s two 50-minute races, Eversley became embroiled in a race-long battle with the Bentley of Andrew Palmer and a McLaren piloted by Colin Thompson, resulting in a 10th-place finish. Cunningham, encountering handling and steering issues, persevered to finish 14th in the highly-competitive GT class.

Our goals for the Acura Motorsports program this season are high

“The race start was pretty crazy,” Eversley recounted. “We were four and five wide going up into Turn 1, then down the hill into the esses! We had an early caution flag, and on the restart I got rear-ended pretty abruptly by a McLaren. So, I learned Acuras have better brakes than McLarens! After that, I had a long, hard, but fair race with Andrew Palmer in the Bentley. That was really enjoyable; it’s great to race clean like that. The Bentley is really well established in GT-3 racing around the world, so it also was good to see where our new Acura stacked up against him.”

“It was a fun race,” Cunningham agreed. “We were dealing with a bit of understeer in our TLX-GT throughout the race, so finishing 14th wasn’t too bad. We like for both cars to be in the top 10 all the time, so I wish we could’ve moved up a few more positions. We’ll make some changes tonight and see how it goes tomorrow.”

Cunningham got off to a strong start on Sunday, picking up two positions on the opening lap, and passing five more cars on a Lap 3 restart after an early caution. But contact from the Bentley of Adderly Fong tipped Cunningham into a spin, forcing him to wait for the entire field to pass before he could resume. Cunningham eventually brought the #42 RealTime Racing Acura to the checkers 15th in the GT class.

“After the early caution, I had the restart of my life and passed, like, a half-dozen cars going up the hill,” Cunningham remembered. “But then, as I turned into the apex at Turn One, I got hit in the back and spun around. I had to wait until all the Porsche Cup [category] cars went by before I could get going again. Although the results weren’t what we wanted, I am pleased with how our Acuras improved over the weekend, and we should be able to build on that progress next weekend at St. Petersburg.”

Sunday’s second round also got off to a rocky start for Eversley, as he spun on the pace lap while generating heat in his rear tires, dropping him to the rear of the 25-car GT field for the start. From there, Eversley battled his way forward, also passing five competitors on the Lap 3 restart, gaining additional positions throughout the first 15 laps of the 22-lap event, then consolidating his gains to take the checkers once more 10th in the GT class.

“My tires were slow to come up to temperature on Saturday, so today I was trying to generate some heat on the pace lap, and spun. It was completely my fault,” Eversley said. “On the restart, I was able to get by a few cars, then just started picking off guys one by one until my tires started to go off, then just held my own to the finish.

“Our goals for the Acura Motorsports program this season are high, so while this was not a bad weekend for RealTime and the TLX-GTs, we didn’t achieve the results we were hoping to achieve,” said Lee Niffenegger, Acura Motorsports program senior engineer. “The car is definitely improved for 2016, our second full season with the TLX-GT, but there are further improvements to come. We’ll take what we learned here in Austin and go on to St. Petersburg next weekend.”