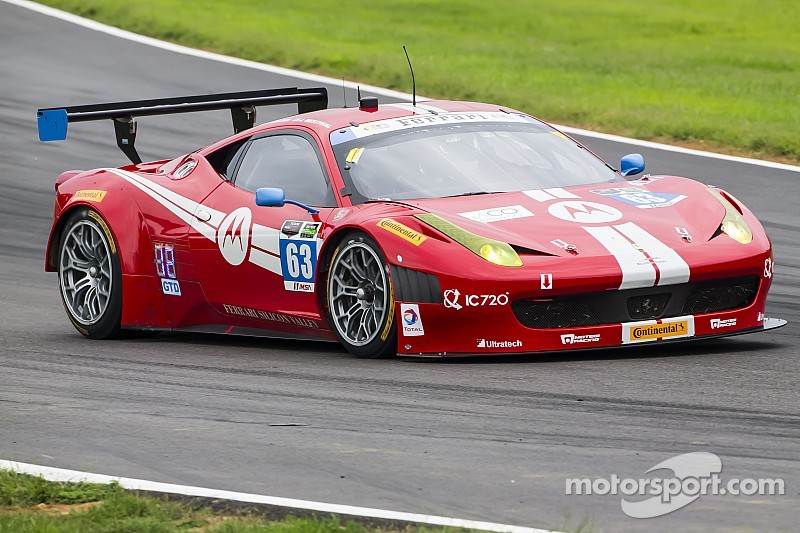 Scuderia Corsa will have a busy 2015 including TUSC, Le Mans, and PWC.

Scuderia Corsa, the championship-winning Ferrari team based in Los Angeles, has finalized its roster of drivers for the TUDOR United Sportscar Championship's Rolex 24 at Daytona, the 24 Hours of Le Mans, and the Pirelli World Challenge.

The team will also enter the No. 64 Scuderia Corsa Ferrari 458 Italia, which will feature an all-Brazilian lineup, with drivers Daniel Serra and Francisco Longo confirmed to drive. Serra, a veteran in the Brazilian Stockcar Series, piloted a Scuderia Corsa Ferrari 458 Italia to fourth on the grid in GT-Daytona qualifying at the 2014 Rolex 24 at Daytona.

"Daytona can't come soon enough for us," said Sweedler. "We are excited to be getting our season started with Scuderia Corsa. We are feeling the pressure after winning last year's race to be as competitive as possible at Daytona. It is great to have Jeff back with Townsend and myself, and Anthony will be a great addition to the lineup. He's another guy with a huge amount of experience in the Ferrari and I think we'll have one of the strongest lineups in GT-D for Daytona."

Already class winners at the Rolex 24 at Daytona and the 12 Hours of Sebring, Bell and Sweedler will compete in the 2015 24 Hours of LeMans in the GTE-Am class. The duo, as well as an American driver to be named at a later date, will drive a Scuderia Corsa entered Ferrari 458 Italia.

"Racing at LeMans has been a goal of mine and Townsend's for a long time," said Sweedler. "After racing at Daytona, Sebring, and Petit LeMans this is going to be a dream come true. It's very exciting to bring an all-American lineup to LeMans and to compete behind the wheel of a Scuderia Corsa Ferrari. We will have a competitive team, car and a strong driver lineup. I am grateful to everyone that has helped to make this happen and we look forward to representing the IMSA TUDOR Championship well."

Duncan Ende, from Los Angeles, Calif., will return to the series at the wheel of a Scuderia Corsa Ferrari. Ende is a veteran in the TUDOR Championship, GRAND-AM, American LeMans Series and PWC.

"I am thrilled to join Scuderia Corsa and to return to Pirelli World Challenge," said Ende. "The series is enjoying a time of unprecedented growth and I am privileged to be on the grid with a championship caliber team behind me. Spending the year in a car that looks and sounds as good as it goes is just icing on the cake! My hat's off to Giacomo for working hard to make this happen."

The team's second Ferrari will be driven by Martin Fuentes from Mexico City, Mexico. Fuentes has raced in a variety of machinery in Mexico as well as North America, and finished third in the TUDOR Championship in the LMPC class.

"Scuderia Corsa has a great reputation, and I am very happy to be a part of their 2015 program," said Fuentes. "Giacomo Mattioli and I are very enthusiastic about starting in Austin and showing what the team is all about and what I can do with the Ferrari 458 Italia GT3. I'm confident with the help of Scuderia Corsa that we are going to fight for the championship."

A third Scuderia Corsa Ferrari will be driven in a partial PWC campaign by Hedlund, from Woodside, Calif. Hedlund has competed in a variety of GT and prototype vehicles in the American Le Mans Series, TUDOR Championship, and PWC.

"After what feels like forever since our last Pirelli World Challenge race together at Sonoma in August, I'm thrilled to have the chance to come back to the team for the 2015 Pirelli World Challenge season in the GT class utilizing the perfect weapon - a Ferrari 458 GT3 Italia," said Hedlund. "Giacomo Mattioli, Roberto Amorosi and Gary Cummings have put together a world class operation and I knew at the conclusion of our Sonoma race weekend in 2014 that if I were returning to the series in 2015 it would only be with Scuderia Corsa. With the Pirelli World Challenge grid getting even stronger since 2014, it will be a tough fight but I couldn't have a better car and team to enter into battle!"

"We have a very strong and experienced all-American lineup for the Rolex 24 at Daytona, and we have young and aggressive drivers for the Pirelli World Challenge," said Mattioli. "Regarding LeMans, Art and myself participated in two editions as car owners. When we founded Scuderia Corsa, the goal was to eventually go back as team owners. To be able to accomplish this in three years is ahead of our plan and makes all of us very proud. It's fantastic, and I would like to thank Bill Sweedler and IMSA/ACO."