Sofronas scored the first Audi win in GT since 2004 when Michael Galati drove an RS 6 to victory at Road America, and the latest Audi win since Adam Pecorari won in the Touring Car class in an A4 at Mosport in 2007. Sofronas crossed the line just 0.301 seconds ahead of Randy Pobst, of Gainesville, GA., in the 34-lap race at the 14-turn, 1.8-mile street course on the Streets of St. Petersburg.

Pobst, driving the No. 6 K-PAX Racing Volvo S60, battled hard with Sofronas after the No. 14 GMG/Mobil 1 Audi R8 LMS got underneath Pobst on the approach into Turn 10 and made the out-braking maneuver stick, earning Sofronas the Cadillac CTS-V Move of the Race.

I had to do the old-school burnout like I did in high school...

The race averaged 82.373 mph, slowed just once by a single full-course caution for on the opening lap.

“The Audi platform is great,” Sofronas said. “There’s so much history with the Audi brand – to bring that to World Challenge, and have four in our stable this weekend, and have the Audi Sport Customer Racing bring down their 18 wheeler to support us with parts and technical support, it really means a lot. It was a big jump for us to go from Porsche to Audi, and obviously well worthwhile. Not only do we have good results, but we have support, too. The guys were up last night until five in the morning changing a motor [in Duncan Ende’s car], and that was all the inspiration I needed.”

Sofronas, who sat on the Motul pole, dropped back to fourth off the start, then battled for 25 laps with Pobst for third place.

“The standing start was tough, we don’t have the launch control in the car yet,” Sofronas said. “So I had to do the old-school burnout like I did in high school, and just try to figure it out. I only managed to lose to one non-Volvo, and then it was all about patience and watching them. The Audi platform is just strong under braking, and I knew that was going to be an advantage to us. I couldn’t catch the leaders and just tried to pace myself.”

The Sofronas/Pobst battle would turn out to be for the lead when the then-leaders each experienced misfortune. Ryan Dalziel, of Windermere, Fla., pulled into the pits from second on Lap 29 with a cut left front tire as a result of contact with a lapped car, boosting the Audi driver to second. On Lap 31, leader Alex Figge, of Denver, Colo., pulled his No. 9 K-PAX Racing Volvo S60 into the pits from the lead to replace a punctured tire. That put Sofronas at the front of the GT field.

“The race was definitely not easy. If people just look at the results, they’re not going to get the full picture. I was settling for third, that’s all I had. And then the first two cars found some trouble somewhere toward the end, but obviously in racing you have to be there at the end.

“When I found myself in the lead, I started to drive as hard as I could to maintain it. Randy was coming, but I knew, being a professional, he wouldn’t take any high risk moves. On the last lap, I went wide into Turn One, the brakes were gone and the tires were gone. But the car was still strong in the sense that I could push it and it was predictable and stable. My hats are off to the GMG crew. They always make me proud, but especially this weekend.”

Pobst, whose first victory as a professional was on the Streets of St. Peterburg in the Volkswagen Cup, scored his 69th career Pirelli World Challenge podium, less than a car length behind Sofronas.

“I’ve had a great time racing the Grand Prix of St. Petersburg,” said Pobst. “This is where I won my first race, 28 years ago, and we had a shot at it today. We were in it in the K-PAX Volvo, it’s really good at coming off the corners. No car here puts a bigger stress on these Pirelli Tires, and they held up great.

“I got a lot of help from my teammate Alex Figge, who won yesterday. He was quick this weekend, and I learned from his data and got better. I feel bad for Alex, he had a little problem today and something took him out. But it’s a long season, and I just tried to keep my nose clean and darn near got another win for the K-PAX Volvo.”

“It was a great race,” O’Connell said. “I’m really proud of everyone in the series. We started out the season with two races and what did we have, three or four caution laps? Everyone has just really raised their game this year. I’m pretty stoked, we got third with a fifth-place car. As a driver, you review your performance and I look at both races, and I drove them about as well as I can. I’m pleased with my performance and the team’s performance, and we’re just looking forward to doing what we know how to do – finish races and hopefully get some wins along the way.”

Mike Skeen, of Charlotte, N.C., posted a fourth place finish on Sunday. The No. 2 Hawk Performance Chevrolet Corvette started in sixth, and was shuffled back to seventh on the opening lap. Skeen and Andy Pilgrim, of Boca Raton, Fla., spent the early segment of the race in a close battle until GTS traffic allowed Skeen to separate from Pilgrim’s No. 8 Cadillac Racing Cadillac CTS-V.R.

Baldwin, in the No. 73 Motul/StopTech/Invoice Prep Porsche Cayman S, doubled down in St. Petersburg, earning a 0.029-second win to follow up an opening-round victory a day earlier. 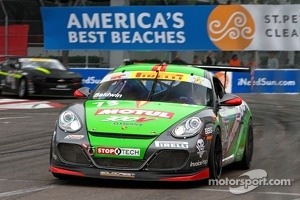 Sitting on the Motul pole, Baldwin battled with Andy Lee, of Colorado Springs, Colo., early in the race until Lee pulled the No. 20 Best IT Chevrolet Camaro into pit lane with mechanical issues. Baldwin was then able to hold off Lawson Aschenbach, of Jupiter, Fla., maintaining a gap to the second place driver through traffic on the street circuit.

“My guys took the car back and worked until midnight [last night] and made the car better,” Baldwin said. “I drove today one of the best setup race cars. We hit it dead on. I don’t care who would have come up and run with me, we would have beaten them. It was one of those days. These two wins go to the hard work of my crew from Gold Crest Motorsports and GTSport Racing, they give me a great car, and I’m just thrilled an honored to be able to drive it.”

“Hat’s off to everybody at Blackdog Speed Shop,” Aschenbach said. “They worked on this Chevy Camaro all winter long, and to be able to show up here, turn its first laps, and get two top fives, I’m ecstatic with that. We’ve just got to do a little bit of testing and sort it out a little bit. I had nothing for Baldwin today, that Cayman was just ridiculous. But I’m happy with the result, hopefully we can improve on this and get that top spot soon.”

The No. 42 Acura/HPD/RealTime Racing Acura TSX driven by Peter Cunningham finished in the third GTS position, making a pass around Kevin Gleason, of Johnstown, Pa., on lap 30. Cunningham, of Milwaukee, Wis., tallied his 114th top-three finish with Sunday’s result.

“The RealTime Acura ran smoothly and consistently the whole time,” Cunningham said. “We kept our nose clean and just tried to get through traffic. As it turned out, instead of finishing fourth there I finished third. Gleason got caught up in a little bit of traffic, and I had an opportunity.”

Ardee Toppe, of The Woodlands, Texas, took the Sunoco Hard Charger Award in the No. 21 Ford Mustang Boss 302, gaining 10 positions overal, and finished 12 in GTS.

Brian Kleeman, of Towson, Md., got a good jump on the start, gaining seven positions in lap one in his No. 07 DXD Clutches/DWW Motorsports Nissan 370Z, to win the Optima Batteries Best Standing Start Award. Kleeman finished Race Two in 11th in GTS. The driver of the No. 24 STANDD.org/Merchant Services Audi R8, Duncan Ende, of Los Angeles, Calif., made the Invisible Glass Clean Pass of the Race on his way to a seventh place finish.

Sofronas leaves the weekend as the Drivers’ Championship leader in GTS with 259 points, ahead of Figge (207), Pobst and O’Connell (190 each), and Pilgrim (165). Audi and Volvo each scored 17 points in the Manufacturers’ Championship, with Cadillac third with 10.

Baldwin’s 294 points came on two GTS wins to lead the class, with Aschenbach and Cunningham tied for second with 190. Lee (154) sits fourth after the opening weekend, while Wilkins scored a pair of sixth-place finishes worth 152 points. Chevrolet leads the GTS Manufacturers’ Championship with 15 points, over Acura (10) and Kia (3).

Round Three of the Pirelli World Challenge will take place April 19-21 at the Long Beach Grand Prix presented by Kia, as part of the Toyota Grand Prix of Long Beach.

O'Connell and Pilgrim third and fifth in race two for Team Cadillac at St. Pete