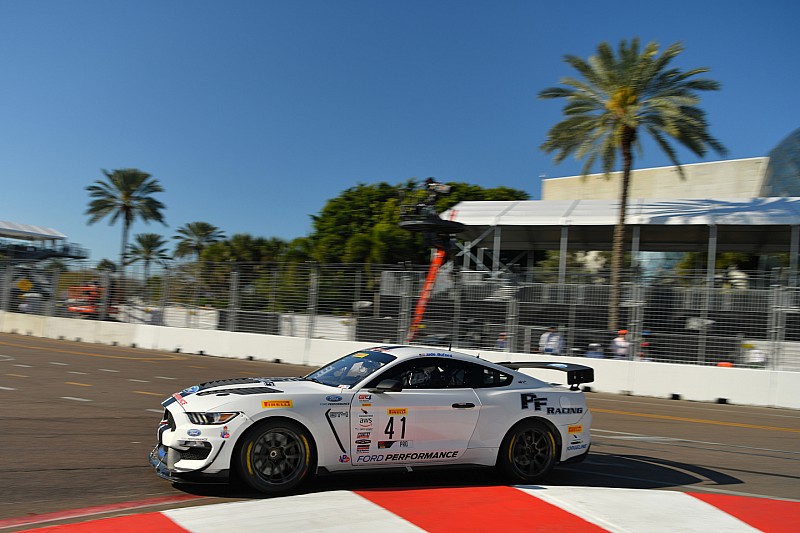 Jade Buford dominated the second Pirelli GT4 America Sprint stanza on the streets of St Petersburg in Florida on Sunday in his PF Racing Ford Mustang.

Buford, who threw away a likely victory yesterday when he outbraked himself while leading, started from pole due to his fastest lap in that race. He outdragged Saturday winner Ian James’s Panoz into Turn 1, with James holding off Spencer Pumpelly’s Porsche Caymen and a charging Michael Cooper (McLaren).

Buford extended a 4-second lead by lap five, as James, Pumpelly, Robinson and Lewis duelled over second. Pumpelly dived past James at Turn 4 just before half distance of the 50-minute race, by which time Buford enjoyed a 6.5s lead, and James also tumbled back behind the two Camaros on the following tour.

The battle for second heated up yet further in the closing minutes as Robinson barged his way ahead of Pumpelly at Turn 1. Stewards ordered him to give the position back a lap later, but Robinson found a legal way through a few laps later.

Lewis completed the podium, passing Pumpelly at Turn 1 on the final lap, while James fell away to a distant fifth place.

An entertaining battle for Am class honours, and sixth overall, went the way of Preston Calvert's Panoz who pulled a last-lap pass on Jarett Andretti’s McLaren, with Marko Radisic (BMW) also jumping ahead of Andretti before spinning on the slowing-down lap!