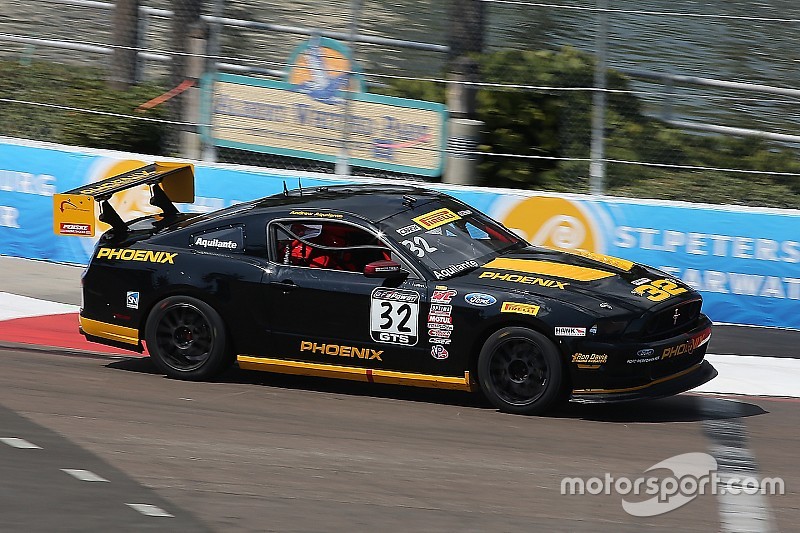 Andrew Aquilante won the opening round of the Pirelli World Challenge’s GTS class on the streets of St Petersburg in his Ford Mustang Boss 302.

The race ‘started’ under yellow flags to allow drivers to recon the new-look Turn 3 following issues with the track surface.

At the single-file restart on lap four, poleman Aschenbach’s all-new Chevrolet Camaro GT4 led Parker Chase’s Ginetta, as Aquilante’s bid for second around the outside of Turn 1 failed to come off.

The KTMs of Martin Barkey and Frankie Montecalvo were the big losers as the race began, dropping outside of the top eight from top-six starting spots.

Aquilante passed Chase for second at Turn 1 on lap six, and quickly latched on to the back of leader Aschenbach. Two laps later, Aquilante outbraked Aschenbach at Turn 4 to hit the front.

Chase dropped from third to fifth on lap 12 when his Ginetta’s engine cut-out on the exit of the final corner. That promoted Buford to third, ahead of Rodrigo Baptista’s Porsche Caymen. A few laps later, Chase tumbled out of the picture completely when he ran straight on at Turn 4 when his engine cut-out again.

Out front, the leaders all closed up while lapping traffic at half distance. But another gaggle of slower cars allowed Aquilante to gain a big advantage over Aschenbach, while Buford almost pounced for second at Turn 1.

The final laps were a shootout between the two American muscle cars, with Aschenbach squeezing every ounce from his Pirellis but it wasn’t enough for Chevy to overcome Ford – and Aquilante not only scored victory but also set fastest lap for pole position in race two on Saturday.

Baptista was a very distant fourth, ahead of Barkey and Nate Stacy’s Porsche.

Ian James ran sixth in the new Panoz Avezzano early on, until a cloud of smoke signalled its demise with transmission issues.