Stacy’s got it going on at Barber.

What was the 14-year-old able to accomplish in Alabama?

He started fourth in the Pirelli World Challenge Touring Car B-Spec class and maintained that position to the finish, but although Nathan Stacy didn’t win like he said his objective was, he was quite positive about rating his weekend.

“I’m going to go with a solid 9 [out of 10]. I’m just really happy that the car’s together, that we had a good weekend, get a finish, fourth in points, and that we can go to the next weekend and not have to worry about anything,” Stacy said.

Stacy finished alone, with 1st-3rd and 5th-7th in small groups of three that were over ten seconds away from him on the track. Stacy kept pushing his Ford Fiesta but didn’t take any major risks.

“It was kind of interesting [running alone] because I wanted to try to catch the front cars without making any mistakes so the back cars could catch you, so it was just trying to stay consistent but being able to go fast at the same time,” Stacy said.

His big challenge getting off the line were in the Hondas that were near him on the grid.

“Those Hondas have some giddy up and go. The Ford got off the line, but the Hondas went by, so I had to battle them back after a while,” Stacy said. 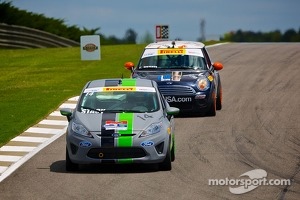 After getting a good gap between third place and fifth place, tire management became critical, as their performance dropped off as the race went on.

“The tires went away [halfway through the race]. Those tires, after they start going away, they go away pretty quick. After that happened, the track had a lot of rubber on it with the Indy cars and everything, so it was really sticky but the tires were pretty bad at the end of the race,” Stacy said.

Because the second PWC TC race was cancelled, Stacy won’t be missing more school than he already has, but it’s pretty certain that he can’t wait to tell his friends how he did.

“A lot of them won’t believe me, but a few of them that do believe me think that it’s pretty cool,” Stacy said.