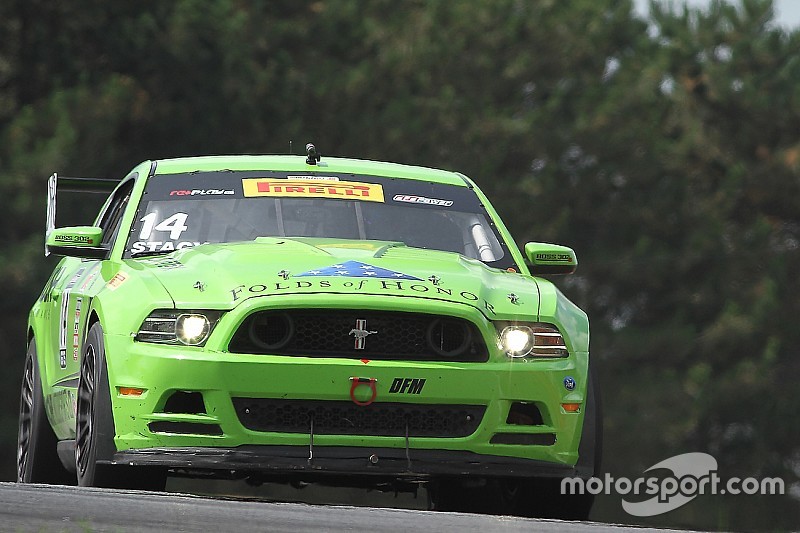 The polesitting KTM XBow of Hugh Plumb had no answer for the grunt of Nate Stacy’s Ford Mustang BOSS 302 at the start, as Brett Sandberg also got ahead of Plumb to grab second. Behind, more KTMs, those of Martin Barkey and Anthony Mantella, fell in line to occupy fourth and fifth. The Ginetta of Parker Chase and the SIN R1 of Scott Heckert followed in sixth and seventh, chased by the Maserati Gran Turismos of Jeff Courtney and Martin Klenin, although the second Ginetta of Harry Gottsacker split them on Lap 2.

Barkey displaced Plumb to grab third and immediately stated closing on the lead battle. On Lap 9, having never got further ahead than 1.7sec, Stacy was having to take a very protective line into the Turn 7 hairpin. On Lap 10, Sandberg came out of the Carousel far faster than the Mustang ahead, to the extent he was fully alongside Stacy into Turn 7, but again Nate hugged the inside, and in fact Barkey tried to steal second from his fellow KTM driver.

That gave Stacy some respite as on Lap 11, Barkey again tried to grab second at the hairpin.

Further back, Plumb was falling back, as both Mantella’s KTM and Chase’s Ginetta got ahead to grab fourth and fifth. And still further back, Lawson Aschenbach had mounted his traditional charge in his Blackdog Speedshop Chevrolet Camaro, having started 17th and yet clocking eighth on the  Lap 10.

But on Lap 12 all eyes turned back to the front, where Mantella had made the lead battle a quartet. His presence gave Barkey a renewed sense of urgency, and he passed Sandberg for second around the outside of Turn 7 on Lap 14. A major sideways moment through the Carousel from Stacy allowed Barkey to have a look at the hairpin, but Stacy played it smart, and kept the three KTMs bottled up.

This pace enforced by the luminous pony car allowed Chase and Plumb to close up, and when Mantella removed his left-front corner on the rear of Sandberg’s car, the resultant tire-rub allowed Chase’s Ginetta and Plumb’s KTM to grab fifth and sixth.

The next significant order changes came on Lap 20, when Sandberg got back around Barkey as they braked hard and passed a backmarker at Turn 4. On the same lap, Aschenbach, who had been threatening Heckert for sixth just a few laps earlier, was repassed by one of his earlier victims, Kevin Marshall in the Lotus GT4, who now moved onto the tail of the SIN.

On Lap 22 Chase’s Ginetta was filling Barkey’s mirrors and on Lap 23 he got around the KTM, as Sandberg continued to pile the pressure on the 16-year-old leader, who kept his driving very clean, with anticipatory defensive lines to the tight turns rather than blocking maneuvers. In fact, it was Sandberg who was dropping wheels in the dirt, trying to find a way past.

But Sandberg was the innocent victim in his demise. A recharged Barkey outbraked the Ginetta of Chase, but carried too much momentum into Turn 8 and smacked into the left-rear fender of Sandberg, spinning him around and damaging his own right-front fender.

The crash tipped Sandberg down to seventh, while Barkey continued but couldn’t hold onto the final podium spot, losing out to Plumb on the final lap.

At the front, though, Stacy’s defense was impenetrable even as Chase’s Ginetta closed up. A sideways slide from Chase at Turn 8 on the final lap gave Stacy the first relief he’d had since the start of the race, and he clinched victory after a near-perfect performance by 1.6sec. Plumb took third ahead of Barkey, Heckert, Marshall, Sandberg, Aschenbach, Klenin and Courtney. The latter survived a late assault from Gottsacker’s Ginetta, that saw both spin out of Turn 4.