After a four-week break, the drivers of the Pirelli World Challenge get back to work as they head to the famed street course in Long Beach, Calif. for the Long Beach Grand Prix presented by KIA.

The 40-deep field of GT and GTS cars will be contesting Round Three of the 2013 campaign. The drivers are ready to get back to the track, some wanting to continue where they left off in St. Petersburg, and others wanting to change their fortune up to this point in the young season.

One of those drivers with momentum is GT point leader James Sofronas, of Villa Park, Calif. Sofronas was in the right place at the right time in Race One and Two, scoring a second place and a win, respectively, as the 2013 Pirelli World Challenge Championships commenced with a doubleheader on the Streets of St. Petersburg last month.

For his home race, Sofronas will look to lead his Global Motorsports Group to the top of the podium, attempting to notch another win, adding to his five career wins in Pirelli World Challenge competition and his 52-point lead over Alex Figge. 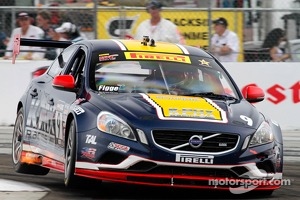 Figge, of Denver, Colo., had an up and down opening weekend in St. Petersburg. The driver of the No. 9 K-PAX Racing Volvo S60 took home a win in Race One and finished 13th in class in Race Two, leaving him second in the GT drivers’ championship standings with 207 points.

Randy Pobst, of Gainesville, Ga., driving the No. 6 K-PAX Racing Volvo S60, had top-five finishes in both rounds, but spent most of the weekend attempting to find the right setup. Pobst was able to hang tough, scoring valuable championship points, and a second-place finish in Round Two. Pobst will start Pirelli World Challenge Round Three sitting third in drivers’ points, 17 back of his K-PAX teammate.

Cadillac Racing teammates Johnny O’Connell, of Flowery Branch, Ga., and Andy Pilgrim, of Boca Raton, Fla., were also able to notch top-five finishes in Round One and Two of the 2013 campaign. Returning to the streets of Long Beach may be a welcome thought for the two drivers piloting CTS V-Rs, as Pilgrim, in the No. 8, was able to grab the top step and O’Connell, in the No. 3, the third step on the podium a year ago.

Sofronas, principal of the Southern California-based Global Motorsports Group, will be fielding five GT-prepped cars at Long Beach as well as one GTS class car. Four-fifths of the GT contingent will be the Audi R8, while the team will also be entering a Porsche 997 for Brent Holden, of Newport Beach, Calif., who will be making his first Pirelli World Challenge start of 2013.

Four other Southern California GT drivers will be making starts in their “home” race. Tomy Drissi, of Los Angeles, will drive the No. 4 Epic - the movie Chevrolet Corvette, coming off a pair of top-ten finishes in St. Petersburg. Kyle Kelley, of Huntington Beach, Calif., will make his first start in the No. 79 Jamison Engineering Dodge Viper, and Craig Stanton, of Long Beach, Calif., will be piloting the No. 85 Racing for our Heroes Porsche GT3.

For the second time in as many years, the opening two rounds of the GTS class were won by a single driver. This year Jack Baldwin, of Marietta, Ga., is atop the GTS drivers’ leaderboard with 294 points heading to Long Beach, following his St. Petersburg sweep. 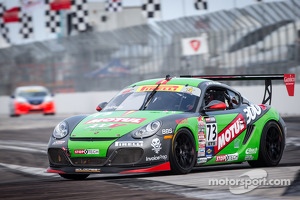 Baldwin experienced Victory Lane at Long Beach last year, but will have to defend against some very tough competition if he wants to drive his No. 73 Motul/StopTech/Invoice Prep Porsche Cayman to another win.

Andy Lee, of Colorado Springs, Colo., will be one of the drivers making a play for the win at Long Beach. Lee, in his sophomore season, driving the No. 20 Best IT Chevrolet Camaro, scored a second place finish in Race One, crossing the line 0.6 seconds behind Baldwin.

Following the strong run in Race One, mechanical issues would lead to his eventual retirement from Race Two. Lee was left with a 21st-place finish, dropping him to fourth in class drivers’ points, with 154.

Lawson Aschenbach, of Jupiter, Fla., tied for second at 190 in drivers’ points, will be another tough competitor to deal with at Long Beach. Driving the No. 10 Blackdog Speed Shop Chevrolet Camaro, Aschenbach scored two top-five finishes in St. Petersburg, including a second-place finish in Race Two.

In St. Petersburg, Peter Cunningham, of Milwaukee, Wis., was the model of consistency scoring a third place finish in the first two races. The steadiness with which Cunningham piloted his No. 42 Acura/HPD/RealTime Racing Acura TSX has put him in a tie for second place in the GTS drivers’ standings.

Wilkins’ teammate Nic Jonsson, of Bankeryd, Sweden, sits at seventh place in the driver’s standings, part of a tight four-way battle. Jonsson will look to move up with a good finish in his No. 36 KIA Motors America KIA Optima.

Kevin Gleason, driving the No. 16 Napleton Porsche Porsche Cayman, crossed the line just off the podium in fourth place in both races in St. Petersburg. Gleason sits in sixth in the drivers’ championship, just two points behind Wilkins, heading to Long Beach.

Tony Gaples, of Libertyville, Ill., drove to a tenth place in the drivers’ standings in his No.11 Black Dog Racing Chevrolet Camaro.

As in the GT class, many Southern California drivers are coming out to compete in the Pirelli World Challenge GTS class at Long Beach. Brandon Davis, of Huntington Beach, Calif., a former series champion with two Pirelli World Challenge wins at Long Beach, is slated to drive the No. 27 HP/Adobe Road Winery Aston Martin Vantage. Davis will team up with veteran driver Damien Faulkner, piloting the No. 26 VIZIO/Hulu Plus Aston Martin Vantage.

Series regular Nick Esayian, of San Diego, will be driving his No. 34 HPD/Acura/RealTime/Red Line Oil Acura TSX. Esayian will look to improve on his ninth-place position in the drivers’ standings.

Dane Moxlow, of Grosse Ile, Mich., in the No. 7 Trenton Forging/Eaton Steel/Huntington Bank Ford Mustang Boss 302, and Lou Gigliotti, of Dallas, in the No. 28 LG Motorsports Chevrolet Camaro, both hope that Long Beach will be a little smoother as both drivers suffered damaged cars from contact at different points throughout the St. Petersburg weekend.

Ardee Toppe, of The Woodlands, Texas, in the No. 21 Ford Mustang Boss, and his Capaldi Racing teammate Brad Adams, of New Orleans, La., in the No. 96 Voodoo Music/Dat Dog/Yo MTV Raps Ford Mustang Boss 302 are scheduled to start in Long Beach. Also scheduled to start this weekend’s event are Harry Curtin, of Buffalo, N.Y., in the No. 29 Best It Chevrolet Camaro; Ric Bushey, of Virginia Beach, Va., in the No. 51 Nissan/Motul/OSGiken/SPL/Sparco Nissan 370Z; Jim Taggart, of Raleigh, N.C., driving the No. 61 LotusUSA/Taggart Autosport/LRR Lotus Exige; Mark Klenin, of Lonetree, Colo., in the No. 62 Schomp BMW M3; and sports car veteran Buz McCall, of Boca Raton, Fla., in the No. 72 Motul/StopTech/Foametix Porsche Cayman.

The three-day event will open with a late afternoon practice session on Friday. Saturday starts with an early-morning final practice starting at 7:30 a.m. (PDT), followed by the 20-minute GT qualifying session starting at 7:55 a.m. (PDT). On Sunday, GTS will take to the track at 8:00 a.m. for their 20-minute qualifying session, then Round Three commences, scheduled for a 4:30 p.m. (PDT) start.

Ken Stout Racing debuts their Scion FR-S on the streets of St. Petersburg