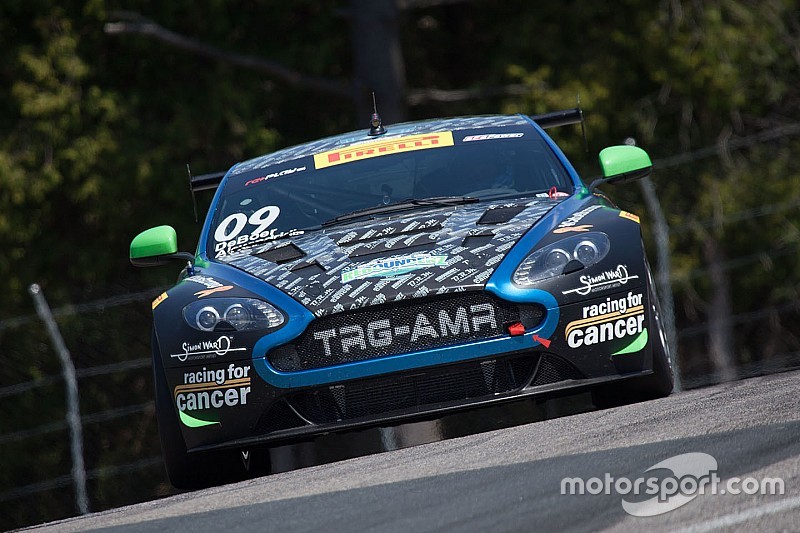 TRG-Aston Martin Racing is defending its points lead in PWC’s SprintX, and will compete in both the GTS Sprint and SprintX races.

Petaluma, CA — TRG is on its way to the Utah Motorsports Campus this weekend to race in two series, simultaneously: the Pirelli World Challenge and the Porsche Pirelli GT3 Cup. TRG-Aston Martin Racing is defending its points lead in PWC’s SprintX, and will compete in both the GTS Sprint and SprintX races. The two TRG Porsche drivers, Craig Lyons and Steve Miller, will race their Cayman GT4 Clubsport cars in the single-make Pirelli GT3 Cup series.

TRG’s Aston Martin V8 Vantage drivers – Jason Alexandridis, Derek DeBoer, Max Riddle and Kris Wilson – have been racking up trophies this season and ready to add more PWC hardware to their collection. DeBoer in particular is excited to defend his win at Road America, which was his first PWC victory. Riddle has won this season as well, in his home country of Canada. In GTS and SprintX, the 60-minute race series with a pit stop and driver change, Riddle and Wilson are tied for the lead with 220 points, each. All four TRG-AMR drivers will compete in this new competition format on both Saturday and Sunday.

Riddle/Wilson will share the No. 07 TRG-AMR Adobe Road Wines/LaSalle Solutions Aston Martin V8 Vantage, while the Alexandridis/DeBoer pair will drive the No. 09 TRG-AMR BRM

Chronographes/Rebounderz Rohnert Park/Racing for Cancer/Pirata Della Strada/Simon Ward car. Max Riddle will race in both of the 50-minute, single-driver GTS Sprint sessions, which are also planned for Saturday and Sunday.

In the Porsche Cayman Clubsport GT4 cars are TRG drivers Craig Lyons in the No. 3 Stor-It Self Storage/Mobettah Collectible Cars entry, and Steve Miller in the No. 7 James Farrell & co./COLO Logistics Porsche. Both Lyons and Miller have a long history racing with the German marque – Miller has raced with TRG multiple times including stints at the 24 hours of Daytona and took 2nd place in the 2013 Platinum Class of the Pirelli GT3 Cup series. Lyons has been training hard this year and competed in multiple racing formats including racing his new Cayman and has also seen success in racing his 1968 911S in the SVRA.

TRG itself has had tremendous success in Utah with multiple marques and series. The team’s signature lightning bolt logo has made an appearance in many podium ceremonies, including in PWC and Grand-Am series. In 2006, TRG's Marc Bunting and Andy Lally won the Grand American Rolex Series GT drivers’ championship at Utah with a Pontiac GTO.R. That race also led to TRG capturing the team championship and carrying Pontiac to the GT manufacturer title.

“This is going to be a fantastic doubleheader weekend for us running side-by-side with our Porsche and Aston teams,” said Kevin Buckler, CEO. “As usual, we’re looking for strong performances from all our drivers as well as chasing a championship in PWC’s SprintX. TRG has a truly amazing history here with victories running with Porsche, Pontiac and Aston and we are looking forward to adding to that this weekend! Everybody on the team is looking forward to supporting our drivers in Utah.”