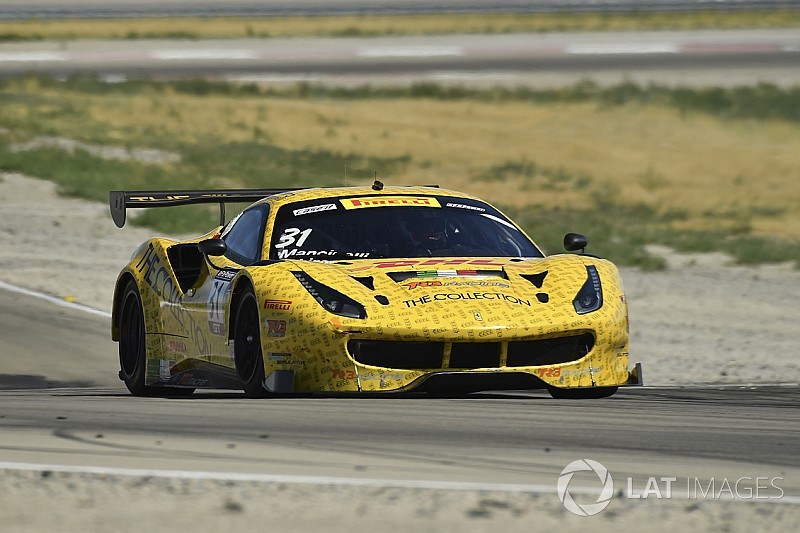 Niccolo Schiro and Daniel Mancinelli survived a couple of late-race restarts to bring the TR3 Ferrari 488 home first ahead of the Acura NSX of Tom Dyer and Ryan Eversley in the second SprintX race of the weekend at Utah Motorsports Campus.

Schiro made a strong start but nonetheless moved left to protect himself from the Acuras of Mark Wilkins an Dyer into Turn 1, as Jeroen Bleekemolen shot his Mercedes AMG GT ahead of the Cadillac ATS-V.R of Johnny O’Connell in fifth.

Dyer grabbed second from Kox at the start of Lap 2 and that allowed Bleekemolen to also demote the #93 Acura, which ducked into the pits at the end of the lap with a deflating tire. This kerfuffle over P2, allowed Schiro to open up a 2.8sec lead by Lap 3, while Dyer had a similar margin over Bleekemolen.

Ben Barnicoat moved the #9 K-PAX McLaren 650S into the Top 10 on Lap 11, in a difficult weekend for the McLaren.

Schiro pitted immediately the pitlane opened, with a 5sec-plus lead, handing over to Mancinelli, but leaving the lead to Dyer’s Acura. The yellow Ferrari resumed in fifth, while Dyer pitted from the lead a lap later to hand over to Ryan Eversley.

Unfortunately, Eversley stalled briefly, but his margin over Bleekemolen should have seen him resuming in second once everyone’s pitstops played out, but the NSX was now 10sec behind the 488.

Bergmeister handed over to Pat Long on Lap 15 with 28mins to go, and a lap later O’Connell handed his Cadillac over to Ricky Taylor as the remainder of the frontrunners all filed in and out without major incident.

The yellow then flew to recover Will Stevens’ stranded Bentley Continental which had expired on track during the pitstop sequence.

The big winner from this caution was Eversley who had his 11sec deficit to leader Mancinelli removed (although there were two amateurs between them). Behind him after a strong stop would be Long, followed by the Cadillacs of Taylor and Michael Cooper who had taken over the #8 car from Jordan Taylor.

In sixth was Alvaro Parente’s #9 McLaren after Barnicoat’s strong opening stint,  ahead of the Bleekmolen/Ryan Dalziel Mercedes, and Bryan Sellers in the #6 K-PAX McLaren.

Also notable were the efforts of Pierre Kaffer and Spencer Pumpelly, after the latter’s clash in yesterday’s race demoted the Magnus Racing Audi R8 to the back of the grid. They were running ninth at the restart.

At the restart Eversley immediately cleared the backmarkers and within half a lap had closed up on leader Mancinelli, while Parente made a typically muscular move to grab fifth from Ricky Taylor who had already lost a spot to teammate Cooper.

Another yellow flew almost immediately for a clash from Preston Calvert’s Porsche Cayman and David Askew’s Mercedes which left the latter stranded trackside.

The final restart came with three minutes to go, and Mancinelli ran wide at Turn 1, but still had the momentum to hold off Eversley who then found Long trying to pass before the Porsche driver ran wide and ceded third to Cooper’s Caddy. Parente and Taylor then shoved Long down to sixth before the start of the last lap.

Parente homed in on Cooper over the final tour of the track, but came up 0.206sec short.

Little more than two seconds ahead, Mancinelli’s Ferrari held on to clinch victory 1sec ahead of Eversley’s Acura. Taylor could be happy with fifth ahead of the crestfallen Long, while Sellers, Dalziel and Pumpelly held on to P7 through P9, and Wolf Henzler/Jon Fogarty complete the Top 10 in the Gainsco Racing 911.