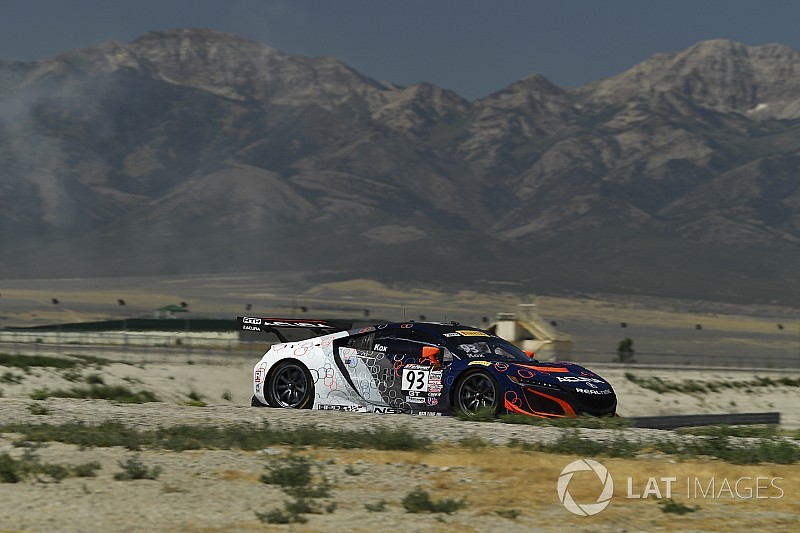 Peter Kox and Mark Wilkins scored the first win for the Acura NSX in the Pirelli World Challenge, but only after a frantic scrap with the TR3 Racing Ferrari 488 of Niccolo Schiro and Daniel Mancinelli in the SprintX race at Utah Motorsports Campus.

Polesitter Peter Kox in the Acura NSX led from the start with Daniel Mancinelli’s Ferrari 488 taking a wide line into Turn 1 to hold off Pat Long’s Porsche 911 to maintain second. This trio were chased hard by Ryan Eversley in the second NSX.

Meanwhile, the K-PAX McLaren 650S Alvaro Parente shot forward at the start, elbowing his way up to sixth ahead of Ryan Dalziel’s Mercedes AMG GT3 and Adderly Fong’s Bentley to tuck in behind Ricky Taylor in the leading Cadillac ATS-V.

Kox’s first real test came when he hit traffic, 15mins into the one-hour race. The first of the backmarkers was Wolf Henzler in the #99 Gainsco Porsche which had suffered a right-rear puncture in the early laps and it allowed Mancinelli to close in on the lead Acura, but not near enough to try a pass. However, the same backmarkers did allow Eversley’s Acura to come within stabbing distance of Long’s third-placed Porsche.

Further back, Michael Cooper’s second Cadillac started putting the pressure on Dalziel, while Eversley got around Long in traffic with 35mins to go – just before the ‘pit open’ board was hung out – and immediately stretched 2sec over the Porsche.

Parente and Fong immediately pitted as soon as they could, the McLaren passing to the hands of Ben Barnicoat and the Bentley to Vince Abril, and Eversley soon followed suit to give up his seat to Tom Dyer, although it wasn’t a strong stop.

Leader Kox stopped with 30mins to go for Mark Wilkins, leaving Mancinelli to try and set a hot lap in the Ferrari to try and jump the #93 Acura. It worked perfectly, Niccolo Schiro driving the Ferrari back onto the track some three seconds ahead of Wilkins. Eversley/Dyer’s pitstop issues had allowed Long/Jorg Bergmeister and Taylor/Johnny O’Connell into third and fourth respectively albeit 12 and 14seconds behind the leader. Sixth ran Parente ahead of Fong and Cooper.

With 18mins to go, Schiro skated off the track on a Clubhouse righthander and relinquished the lead to Wilkins’ Acura, falling 3.4sec behind.

However, with 10mins to go, Schiro had been able to whittle this down to 1.3sec and on a clear track and with 7mins to go, they were just a car-length apart. The final laps were fascinating, with the Acura running low on grip but having a straightline advantage over the Italian car. Despite a couple of slides too many, Wilkins defended fairly and hung on to win by 0.228sec.

Bergmeister’s Wright Motorsports Porsche was some 15sec adrift, while O’Connell was fifth for Cadillac, able to escape from Dyer in the second Acura, and the Barnicoat/Parente McLaren.