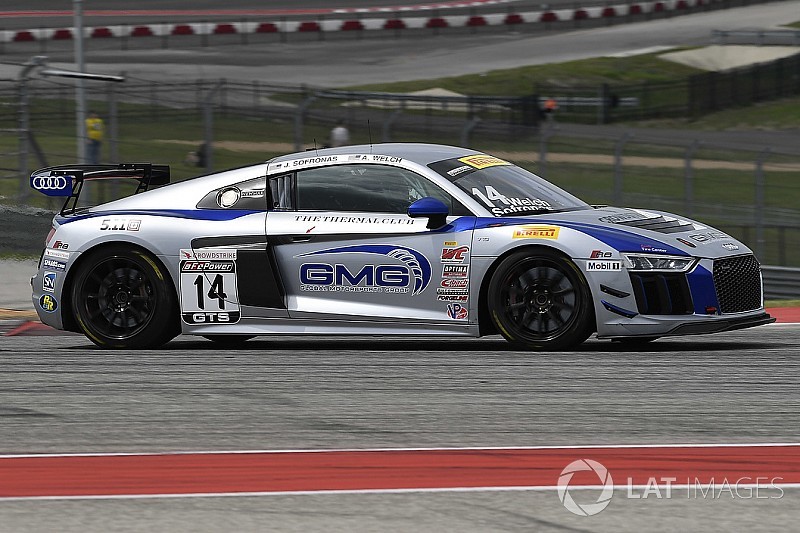 Pole-sitter James Sofronas lost out on the opening lap, but he, Alex Welch and the GMG pitcrew were perfect thereafter to win ahead of the VOLT Mustang and the Blackdog Speed Shop Camaro of Lawson Aschenbach and Andy Pilgrim.

Colin Braun tracked GMG Audi R8 teammate Sofronas from the start, and at Oak Tree bend, Braun dived for the inside. Sofronas tried to cling on around the outside through the exit but it served him badly, dropping him to fourth behind Nick Wittmer’s ST Racing BMW M4 and Christian Szymczak’s Murillo Racing Mercedes AMG GT.

A mid-pack shunt put the field on hold for four laps, but on the restart yesterday’s winning VOLT Ford Mustang with Trent Hindman at the wheel was trying to move up from fifth, while holding off the two Blackdog Speed Shop Chevy Camaros of Lawson Aschenbach and Michael Cooper.

Wittmer moved past Braun to grab the lead and within a couple of laps had pulled a two second gap.

A scruffy lap from Wittmer on Lap 10 allowed Braun back onto the BMW’s tail but the R8, although more settled through the twisty sections, didn’t have the straightline pace to be close enough for a pass in the primary hard braking zones. Szymczak had floated up on the tail of this duo by the time he pitted on Lap 12 to hand over to Matt Fassnacht. However a stop that beat the 75sec compulsory pitstop delta resulted in a drive-through pit penalty that took the Murillo Mercedes out of contention.

Wittmer led the majority of the field into the pits at the end of Lap 12, handing over to Samantha Tan. Unfortunately, the ST Racing team were also a tad quick – by just 0.2sec – and she too was penalized.

That left the GMG Audis now piloted by Alex Welch and George Kurtz in first and third, separated by the Camaro of Andy Pilgrim (taking over from Aschenbach) with this trio stalked by the other Camaro of Gaples who’d replaced Cooper.

But Brynjolfsson was carrying on Hindman’s fine work in the opening stint, and charged past Gaples into fourth to close on the Pilgrim vs Kurtz battle. On Lap 21, the VOLT Mustang was into third and monstering the Camaro, the pair of them now seven seconds behind the Sofronas/Welch Audi. On Lap 23, Brynjolfsson snatched second.

He’d surely never have closed the gap on the leading R8 but out came the full-course caution as multiple cars fell off the track at Turn 5 and at Oak Tree. However, hopes of a sensational shootout to the checkers died as the race ended under the caution. Sofronas/Welch thus beat Brynjolfsson/Hindman, Aschenbach/Pilgrim, Braun/Kurtz and Cooper/Gaples.