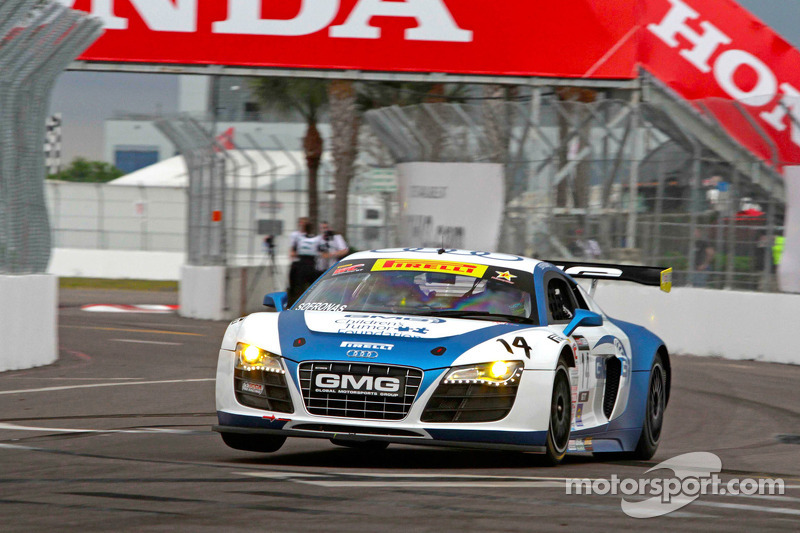 A recording setting field of over 90 cars across four classes will compete at Circuit of The Americas.

Following a dramatic, unpredictable weekend at Long Beach, the drivers and teams of the Pirelli World Challenge are back in action, taking to the pristine Circuit of The Americas (COTA) in Austin, Texas, for the Cadillac Sports Car Challenge.

A recording setting field of over 90 cars across four classes will compete at COTA. For the GT and GTS classes, this doubleheader weekend serves as Rounds Four and Five of the season. The Touring Car and Touring Car B-Spec classes begin the 2013 campaign with a three-race event.

James Sofronas, of Villa Park, Calif., has been in the hunt for a win in each of the first three races of 2013. For Sofronas, strong qualifying runs, followed by tough racing, has resulted in two wins and a second place finish, putting him atop the drivers’ leaderboard with 407 points. The most recent of those wins came at his “hometown” race at Long Beach. In a surprising finish that saw last-lap leader Johnny O’Connell retire under yellow before receiving the checkers, the No. 14 GMG/Mobil 1 Audi R8, driven by Sofronas, inherited the lead and the win.

Sofronas’ Global Motorsports Group will field a series record seven cars in Austin, including six GT and one GTS entry. Duncan Ende, of Los Angeles, Calif., in the No. 24 STANND.org/Merchant Services Audi R8; Bret Curtis, of Westlake Village, in the No. 32 United Steel Supply/Spectra Resources Audi R8; Brent Holden, of Newport Beach, Calif., in the No. 44 GMG Porsche 997; Alex Welch, of Englewood, Colo., driving the No. 08 Spyder/Lasso/GMG Audi R8, and Mike Hedlund, of Woodside, Calif., driving the No. 40 Under Armour Audi R8, make up the remainder of the Global Motorsports Group GT squad.

Andy Pilgrim, of Boca Raton, Fla., has quietly climbed into second in the drivers’ standings, 132 markers back. In the No. 8 Cadillac Racing Cadillac CTS-V.R, Pilgrim has notched three top-fives, including a second place in Long Beach. With another solid outing, Pilgrim may take a bite out of Sofronas’ lead.

Alex Figge, of Denver, Colo., is looking to forget Long Beach and move on with the rest of the season. After taking the lead on the start from the outside of row one, the driver of the No. 9 K-PAX Racing Volvo S60 seemed to have the race in hand until a mechanical issue ended his day. Figge, who sits third in drivers’ points at 271, may be able to turn his recent luck around with a good finish in Austin.

Defending 2012 GT Champion Johnny O’Connell, of Flowery Branch, Ga., sits fourth in drivers’ points, with 259, heading into Round Four. Following the unlucky circumstances at Long Beach after debris punctured his radiator and robbed him of victory, O’Connell looks to bounce back behind the wheel of the No. 3 Cadillac Racing Cadillac CTS-V.R.

Mike Skeen, of Charlotte, N.C., has been on an upward trend, finishing each race in a better position that the previous round. Skeen, driving the No. 2 Hawk Performance Chevrolet Corvette, sits fifth in points, only three behind O’Connell, and will try to keep that trend alive in Austin.

Figge’s K-PAX racing teammate, Randy Pobst, of Gainesville, Ga., also wants to keep moving forward in 2013. After placing 13th in the No. 6 K-PAX Volvo S60 due to a start line mechanical issue at Long Beach, he looks for improved results at CoTA.

Tim Bell, of Los Altos, Calif., continues to develop the No. 12 Hawk Performance Nissan GT-R into a front-runner, and hopes to continue to make strides at Circuit of The Americas.

Tomy Drissi, of Los Angeles, will make the start with a different team. Drissi moves to the No. 46 The Heat Porsche 911 GT3 Cup, for GTSport Racing with Goldcrest.

Jack Baldwin, of Marietta, Ga., holds onto the drivers’ championship point lead following a third place finish at Long Beach. The driver of the No. 73 Motul/StopTech/Foametix Porsche Cayman has accumulated 389 points through three rounds, and swept the season opening weekend doubleheader at St. Pete.

Lawson Aschenbach, of Jupiter, Fla., made headway in the drivers’ standings to second, following a spirited battle with Peter Cunningham for the win at Long Beach. Aschenbach, driving the No. 10 Blackdog Speed Shop Chevrolet Camaro, will look to keep moving forward in the standings, 57 markers behind Baldwin.

Following two third-place finishes in St. Petersburg, Cunningham, of Milwaukee, Wis., took second place at Long Beach, accumulating 301 points, and holding third in the drivers’ standings. Cunningham has won nine times in the Pirelli World Challenge debut at a new venue, which could mean the No. 42 Acura/HPD/RealTime Racing Acura TSX will find victory circle in Austin.

Tony Gaples, of Libertyville, Ill., Nick Esayian, of San Diego, and Buz McCall, of Boca Raton, Fla., each have the advantage of Championship-winning teammates to help gain the advantage in Austin. Gaples will drive the No. 11 Blackdog Speed Shop Chevrolet Camaro, the sister car to Aschenbach. McCall will drive the No. 72 Motul/StopTech/Foametix Porsche Cayman, identical to Baldwin’s car, and Esayian will drive the No. 34 HPD/Acura/RealTime/Red Line Oil Acura TSX, the match to Cunningham’s machine.

Texans Alec Udell, of The Woodlands, in the No.17 Motorsports Development Ford Mustang Boss 302, Ardee Toppe, of The Woodlands, in the No. 21 Ford Mustang Boss, and Lou Gigliotti, of Dallas, in the No. 28 LG Motorsports Chevrolet Camaro, are all slated to compete in the first of two Pirelli World Challenge events held in the state. Gigliotti is the only driver with more wins at a venue’s inaugural running than Cunningham, with 11 such triumphs in his storied career.

Additionally, three drivers will make their first start of 2013 this weekend: Scott Bove, of Conifer, Colo., in the No. 22 Classic BMW/Motul/BBS/Eibach BMW E46 M3; Roger Miller, of Salt Lake City, Utah, in the No. 23 Ford Mustang Boss 302S; and Tom Long, of Raleigh, N.C., in the No. 60 Lotus USA/Taggart Autosport/LRR Lotus Exige.

Sixteen Pirelli World Challenge Touring Cars will open the 2013 season at Circuit of The Americas, with back-to-back 25-minute sprints scheduled for Saturday and a 40-minute run planned for Sunday.

A three-time race runner-up in 2012, Ryan Winchester, of Mason City, Iowa, is the only returning driver from last year’s top-three in the drivers’ standings. That makes the list of pre-season favorites, including Winchester, in the No. 72 Ultimate Racing/HPD Honda Civic Si, very short for 2013, allowing the possibility of a fresh face to establish themselves as the driver to beat early on.

Patrick Seguin, of Clarence Creek, Ont., finished 2012 ranked fifth in drivers’ points. This year, driving the No. 64 Gear Tie Racing/Fortune Auto Honda Civic, he looks to improve on that position from last year.

Pirelli World Challenge GT regular Mike Skeen, of Charlotte, N.C., teams up with Brandon Reed of Indianapolis, Ind., for Grid-1/Matt Young Motorsports. Skeen will pilot the No. 5 Camp Quality USA/Hawk Performance/Trackpro Mazda MX-5, while Reed will drive the No. 15 Camp Quality USA Mazda MX-5. The MX-5 entries mark the return of a two-seater to Touring Car competition for the first time since the late 1990s.

Two drivers, Charlie Solomon, of Irving, and Colin Cohen, of Southlake, call Texas their home state. Solomon, in the No. 21 Mazda RX-8, and Cohen, in the No. 03 Milltek Sport Stasis/Revo Volkswagen GTI, will hope for the “home field advantage.”

Three rookies make their series debut in Austin. Dinah Weisberg, of Webster, N.Y., in the No. 40 Redcom/BERG Racing Porsche Boxster; Sarah Cattaneo, of Scottsdale, Ariz., in the No. 43 IDoBorrow.com Honda Civic Si; Jon Miller, of Orlando, Fla., in the No. 68 Shea Racing Honda Civic Si, make up that list.

The Touring Car B-Spec class has undergone some changes for 2013. While the familiar close, intense racing will still be present, the season has expanded from nine to 14 Rounds. Each of the races will be run concurrently with the Touring Car race, much like the GT/GTS races.

One of the more notable driver moves during the offseason was Touring Car veteran and race winner Shea Holbrook’s move to TCB. Holbrook, of Groveland, Fla., will drive the No. 67 TrueCar/Lucas Oil Honda Fit. Her team, Shea Racing, will also field the TC car of Miller as well as the TCB entry of P.J. Groenke, of Toronto. Groenke will drive the No. 66 Shea Racing Honda Fit.

Six other racers looking to make their mark in the rookie-heavy TCB class include Ernie Francis, of Davie, Fla., driving the No. 2 Hydraulic Jeans Mazda2; Scott Kuhne, of Fort Wayne, Ind., in the No. 24 Hawk Performance Mini Cooper; Ed Magner, of Portage, Mich., piloting the No. 48 Mini Cooper; Chip Howell, of Chapel Hill, N.C., driving the No. 55 QSR Magazine Mini Cooper; Fernando Seferlis, of Panama, in the No. 77 Compulab Mazda2; and multi-time SCCA Club Racing Champion Joel Lipperini, of Pittston, Penn., in No. 81 RaceLabz/Honda/HPD/Raceshopper Honda Fit.

This will be the “home” race for four of the 21 Pirelli World Challenge TCB entries. Jack Murray, of Montgomery, Texas, will race the No. 11 Fiat of Austin/Wild Bubbas Fiat 500; Robbie Davis, of Dallas, drives the No. 37 MINI USA/MINI Financial Services Mini Cooper; Steve Taake, of Houston, in the No. 95 Mazdaspeed Mazda2; and former SCCA Solo and RallyCross Champion Brianne Corn, of San Marcos, Texas, in the No. 00 Mazda2.

Other TCB entries at Austin include Jim Cleveland, of Queensland, Australia, in the No. 78 Fiat of Austin/Wild Bubbas Fiat 500; Chris Capaldi, of Armada, Mich., in the No. 22 Wolverine Bronze Company Ford Fiesta; Jonathan Baker, of Hollywood, Md., in the No. 32 32 Racing Honda Fit; Ernie Francis, Jr., of Davie, Fla., in the No. 98 Hydraulic Jeans Mazda2; David Alejandro, of Pembrooke Pine, Fla., in the No. 99 ClaimsSupportInc.com Mazda 2; Johan Schwartz, of Denmark, in the No. 01 Endurancekarting.com Mini Cooper; and Braden Miller, of Salt Lake City, in the No. 09 Ford Fiesta, complete the TCB field.