LONG BEACH, CALIF. – The Pirelli World Challenge Championships heads west to the Streets of Long Beach, Calif. for the second race weekend of the 2014 25th Anniversary season. The Roar By the Shore Presented by Kia is the only race weekend where just one race of competition is scheduled for the series' GT, GT-A and GTS divisions.

That said, the season opener to end the month of March at St. Petersburg, Fla. saw only one race rather than two. Severe weather and limited track time lead to the canceling of Round 1; the originally scheduled Round 2 then saw a 50-minute barn burner of a race, decided late when Tomas Enge in a Reiter Engineering Lamborghini Gallardo and Lawson Aschenbach in the Blackdog Speed Shop Chevrolet Camaro made the winning passes in GT and GTS.

Last year's race at the historic 1.968-mile Long Beach street circuit was a thriller, as both Johnny O'Connell and Alex Figge had late win opportunities fall out of their hands, with James Sofronas picking up the overall spoils in GT. Aschenbach, too, had a come-from-behind win at Long Beach with a late pass of seven-time series champion Peter Cunningham to take Blackdog Speed Shop's first GTS class victory.

With 40 cars spread across three divisions and the drama set to unfold once more at every corner, you can be sure The Roar By the Shore will live up to its race name.

With Enge not racing this weekend due to a prior race commitment, the field in GT is wide open at Long Beach. Sofronas, of Villa Park, Calif., seeks an encore of his 2013 Long Beach win in the No. 14 Spyder/The Thermal Club Audi R8 Ultra for his GMG Racing operation. He finished seventh at St. Petersburg and looks to improve upon that result at his home track. 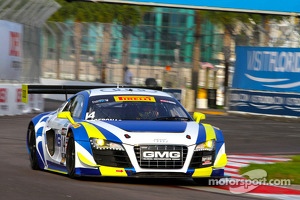 He'll have a teammate within the GT ranks for the first time this year, as Andrew Palmer of Chicago, in the No. 21 GMG Racing Audi R8 Ultra, has been re-categorized from GT-A following his third place overall finish in St. Petersburg. Palmer starred in his series debut and now will have a chance to compete in the all-professional class for the first time.

The Cadillac Racing pair seeks to get on the board as well. For two-time defending GT class champion Johnny O'Connell of Flowery Branch, Ga., he'll be looking to score his first Pirelli World Challenge Long Beach win in the No. 3 Cadillac CTS-V.R. Teammate Andy Pilgrim, of Boca Raton, Fla., led a race-high 26 laps at St. Petersburg in the No. 8 Cadillac CTS-V.R, before finishing second. He won at Long Beach in 2012 and has a chance to take the GT class points lead leaving the weekend.

Mike Skeen, of Charlotte, N.C., was a fast starter at St. Petersburg in the No. 2 Hawk Performance Nissan GT-R. For the rest of the season the team has made a car change and will be running an Audi R8 Ultra. Skeen will look for an encore podium finish at Long Beach after coming home third in 2013.

Anthony Lazzaro, of Atlanta, Ga., has two past second place finishes in the Formula Atlantic championship (1997, 1999) at Long Beach, albeit on a different course configuration. He'll look to go one better this weekend in the No. 61 Remo Ferri Group – Ferrari of Ontario/Alberta/Maranello Autobody Ferrari 458 Italia GT3; he led two laps and finished fourth at St. Petersburg.

Tomy Drissi, of Los Angeles, Calif., makes his Pirelli World Challenge season debut in the No. 15 The Amazing Spider-Man 2, opens in theaters May 2 Aston Martin GT3 for Drissi Motorsports/TRG. Drissi's best career series finish in 36 prior starts is third in 2007; his best Long Beach finish was a win in the Trans Am series in 2000.

The 11-car GT class field is bolstered by Tim Bergmeister, of Langfeld, Germany in the No. 31 EFFORT Racing Porsche GT3 R, and Mike Hedlund, of Woodside, Calif. in the No. 64 DragonSpeed/ESM Ferrari 458 Italia GT3. Hedlund finished ninth and Bergmeister 10th at St. Petersburg. Both have a single American Le Mans Series start apiece at Long Beach.

After the 11 GT runners, there will be 9 additional GT-A classified drivers for a total of 20 GT cars at Long Beach. 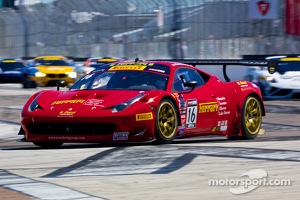 Two others to watch are Bret Curtis, of Austin and Tim Pappas, of Boston, who both have succeeded at this course before. Curtis, driving GMG Racing's No. 32 Spectra Resources/United Steel Supply/Valspar Audi R8 Ultra this weekend, finished a career best fifth here last year. Pappas, in the No. 54 Black River Caviar Mercedes-Benz SLS AMG GT3 has a 2011 GTC class victory at Long Beach in the American Le Mans Series.

GMG has two additional cars entered in GT-A. Bill Ziegler of Ponte Vedra Beach, Fla. is in the No. 95 Swisher Racing/GMG Audi R8 Ultra, with local driver Brent Holden of Newport Coast, Calif. making his first start of 2014 in the No. 44 Audi R8 Ultra.

Series veteran Jeff Courtney, of Milwaukee, Wis., will make his sixth career Long Beach start in the No. 99 Kenda/RecStuff.com Audi R8 Ultra for JCR Motorsports. His best track result is seventh in 2010.

A trio of Long Beach newcomers round out the class. Henrik Hedman, of Ft. Lauderdale, Fla. races in the Swedish flag liveried blue-and-yellow No. 10 DragonSpeed Ferrari 458 Italia GT3, Michael Mills, of Angleton, Texas is in the No. 41 EFFORT Racing Porsche GT3 R, and Dan Knox, of Pilot Point, Texas, races the No. 80 ACS Manufacturing Inc./Performance SpeedTech SRT Viper GT3-R.

Jack Baldwin dominated practice and qualifying, Andy Lee dominated the race, and Lawson Aschenbach took the victory after Lee hit traffic at an inopportune time in the GTS class season opener in St. Petersburg. Expect each of the dynamic trio to factor into this weekend's battle for the Long Beach win in the 20-car field. 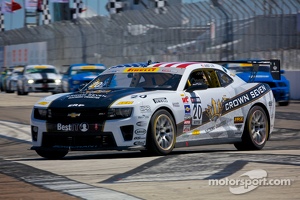 Aschenbach, of Palm Beach Gardens, Fla., took the 2013 Long Beach GTS win and looks for two-in-a-row to open 2014 in the No. 1 Blackdog Speed Shop Chevrolet Camaro. But it's Lee, of Colorado Springs, Col. in the No. 20 Crown7.com / BestIT Racing Chevrolet Camaro who led the most laps at St. Pete and is the 2013 Long Beach polesitter. He's hungry to win.

Baldwin, of Marietta, Ga., took the St. Petersburg pole in the No. 73 RESET-MD/StopTech/Motul Porsche Cayman S and finished third behind the pair of Camaros. Baldwin is a past Long Beach winner in Pirelli World Challenge, in 2012, and looks for his first win of the year this weekend.

All three feature their full-season teammates alongside this weekend. Tony Gaples, of Libertyville, Ill. is in the No. 11 Blackdog Speed Shop Chevrolet Camaro and Buz McCall, of Boca Raton, Fla., is in the No. 72 RESET-MD/StopTech/Motul Porsche Cayman S. While these two are Long Beach veterans, rookie Geoff Reeves of Cleveland, Ohio will make his track debut in the No. 40 BestIT/Bondurant School Chevrolet Camaro.

But look for the pair of Kia Racing/Kinetic Motorsports drivers and cars to shine in this, a race that Kia sponsors. Both Mark Wilkins, of Toronto in the No. 38 Kia Motors America Kia Optima and Nic Jonsson, of Buford, Ga., in the No. 36 Kia Motors America Kia Optima look to bounce back from a challenging weekend at St. Petersburg. Wilkins was fifth and Jonsson seventh a year ago at Long Beach. This is a home state race for Kia, based in nearby Irvine, Calif., and additionally for two other GTS teams: TRG-AMR of northern Petaluma, Calif. and Always Evolving Racing of Los Angeles.

Besides Always Evolving, there will be five other Ford Mustang Boss 302s in the field this weekend. Jack Roush Jr., of Livonia, Mich., makes his track debut in the No. 60 ROUSH Road Racing Ford Mustang Boss 302R, and looks to improve on his fifth place in St. Petersburg.

A single Nissan and Audi apiece round out the 20-car field. SFR Enterprises' Ric Bushey, of Virginia Beach, Va., posted a solid seventh place in St. Petersburg in the No. 51 Nissan/Motul/SPL/OSGiken/Sparco/Sunoco Nissan 370Z and looks to crack the top five this weekend. Don Istook, of River Oaks, Texas, campaigns the RS Werkes Racing No. 01 Forge Motorsports/Recaro Audi TT RS.

McLaren back on the streets of Long Beach

TRG-AMR takes to the streets of Long Beach