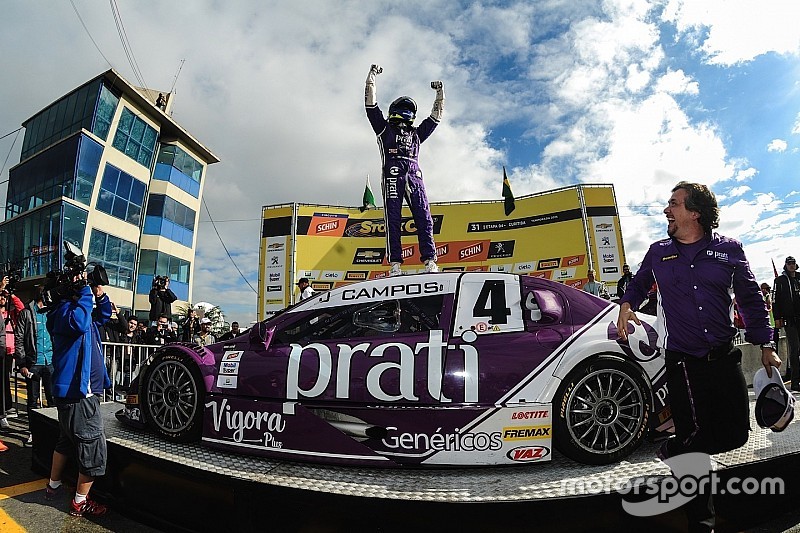 Julio Campos won race two and got ahead of Cacá Bueno by only one point; Daniel Serra won race one but did not finish the second one.

Daniel Serra and Julio Campos won the races number 50 and 51 in Stock Car history in the Curitiba circuit this Sunday afternoon, the fourth round of Brazilian Stock Car Championship. As a result, the Prati-donaduzzi driver, who became the first competitor to win a home race in Curitiba, took the championship lead only one point ahead of Cacá Bueno, who finished seventh and fifth.

The first race started with a huge crowd in the grandstands, and they could see Allam Khodair spinning right in the breaking point for turn 1 and take five other cars with himself. Serra started from third row (P6) and took the lead on lap 5 after overtaking pole sitter Galid Osman. Marcos Gomes came across and took P2, but he was never a contender for the victory, trying to close the gap on Daniel, but the Red Bull Racing driver managed to keep his contender a second behind until the chequered flag.

As a championship matter, our goal is to have good races and make points, not just fight for one victory or another.

With a 10-place grid inversion, Brito and Barrichello shared the front row, but it was Campos who took the lead right on the second lap and opened the gap to fly across the finish line and celebrate his first win of the season. Barrichello tried to close the difference after overtaking Valdeno and going up to P2 with Rafa Matos problem, but it was too late. Cacá Bueno’s brother Popó completed the top-three podium finishers. Afther them, the top-10 had Lucas Foresti, César Ramos, Raphael Abbate, Tuka Rocha and Bia Figueiredo.

The fifth round of Brazilian Stock Car Championship will be held once more in the south of the country, in the challenging circuit of Santa Cruz do Sul on June 28th.

What the winners say

Daniel Serra (Red Bull Racing), winner of Race 1: "I managed to make a good start and went up to second in the first lap and our strategy was to do two good races. Fortunately I kept Marcos behind me and won race one. In race two the car mysteriously shut down, maybe in an engine safety mode, because the temperatures were going up quite quickly. It’s a shame, because we could’ve close the gap to the leader in the championship standings".

Julio Campos (Prati-donaduzzi), winner of Race 2: "I’m very happy. I started in P20 by my mistake on qualifying, but we knew we had a good car, and in the other hand it might have prevented me to be in involved in that turn 1 crash I actually got away. So, everything went well. As a championship matter, our goal is to have good races and make points, not just fight for one victory or another. I want as much points as possibile".