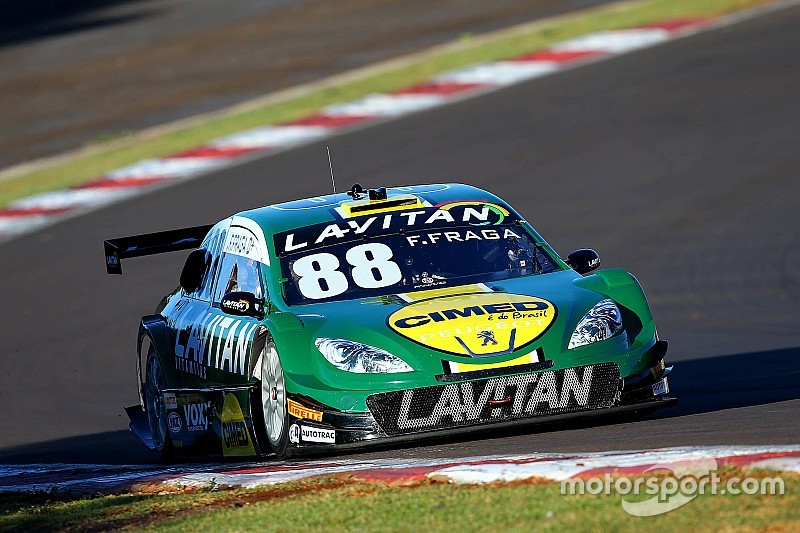 Voxx Racing Team dominated the top of the podium at Campo Grande in round nine of Brazilian V8 Stock Car Championship. Both races were held at the 3.433-km racetrack this Sunday - and with dry track and blue skies. Championship leader Marcos Gomes won the first one and his teammate Felipe Fraga took his third career win in the second heat.

Starting from pole in Race One, Gomes was followed by Allam Khodair and the last spot of the podium was decided only on the final lap. Daniel Serra made a mistake and lost the position to Thiago Camilo - who drove the whole race without the power steering system and had to be helped by his mechanics to get out of the car. Even exhausted, he jumped in the car to start race two.

Cacá Bueno finished tenth and got to start from pole on Race Two. He managed to keep himself in front of the field until the middle of the race, when Felipe Fraga, who started fifth, got in the way and overtook the five-time Stock Car champion.

Basically the strategy was to save the use of the push-to-pass button. As Bueno had to use more than he had planned on Race One, he was left with none at the final lap, when Fraga made a mistake and Bueno retook the lead. But his joy ended right at the opposite straight, where Fraga used his last shot to regain first position. Ricardo Maurício finished third.

Curitiba hosts round ten of Brazilian V8 Stock Car Championship on October 18th. Marcos Gomes leads the standings with 209 points, 34 ahead of Cacá Bueno. Daniel Serra continues third with 156 and reigning champion Rubens Barrichello went up to fourth with 142.

What the winners said

Marcos Gomes #80, Race One winner: "We managed to score some more good points for the championship. We have a great car and it was a nice victory. I am really happy with our performance this weekend, but I cannot relax because the other guys are strong".

Felipe Fraga #88, Race Two winner: "The team gave me a perfect car. I made a mistake in the final lap that almost cost me the win. Fortunately I had my last push-to-pass and managed to regain the lead. This has been a tough year for me. Our results weren’t what we expected, then we had that accident in Curitiba… Even my debut season was better than this until now. But I am driving for Brazilian V8 Stock Car best team and all I have to do is to thank the whole team for not giving up on me".