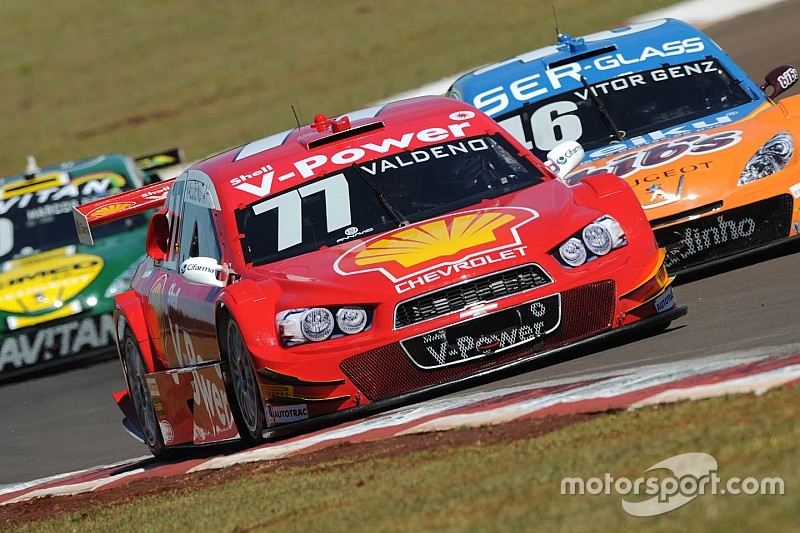 Saturday at Interlagos started with high temperatures and blue skies. But at Brazil’s most famous racetrack it is widely known that everything can change in a blink of an eye. That is exactly what happened during Brazilian V8 Stock Cars qualifying session today. As a reversed order of the championship standings is applied, the leaders were the last ones to do their flying laps.

While there was sun, Valdeno Brito was the fastest man of the session with 1min38s992 - the fastest lap time of the weekend - followed by Mobil AMG’s Átila Abreu (who will replace Brito at Shell Racing next season) and Axalta C2 ace Sérgio Jimenez. Still to go to the track were Ricardo Maurício, Max Wilson, Júlio Campos, Thiago Camilo, Allam Khodair, Rubens Barrichello, Cacá Bueno and Marcos Gomes.

As the latter prepared to leave the pits, a heavy rain poured down at the track all of a sudden. The session was red-flagged so the teams could make the tyre changes - but everything was completely lost for the title-contenders in their hopes to start ahead. The only thing left to do was to go as fast as possible on the wet surface and to be as far ahead of each other as possible.

Rubens Barrichello’s 19 seasons of Formula One experience, his knowledge of Interlagos and his recognized quality of driving talent in the wet made all the difference, and the current Stock Car champion ended up fastest among the ones who qualified in the rain - back in P25, though.

Cacá Bueno, who among the combination of results has to win and hope for Marcos Gomes to finish 14th or worse to clinch his sixth title, starts 26th, one spot ahead of Gomes. The Red Bull driver gave the whole picture about his title chances: "Really, really complicated". "I had made some races in Stock Cars starting from 24th and finishing second, but the risks increase significantly - for me and for Marcos. I have to count on everything now, be it rain, storm, snow, mud, crazy priests running on the track, pit strategy, safety car, whatever, to achieve the title and to get far ahead through the field. I have to do the most brilliant race of my life. The rain was a blow, but I’ll keep my head down and fight until the end", said Bueno.

Marcos Gomes needs a 13th place finish to clinch the title in case of Bueno’s victory to be the 2015 champion. "I would like to have driven in the dry, because we had a pretty good car in those conditions. However, I cannot deny that it is not a good position for Cacá, because if I don’t score any points here he has to be at least P4 in the race. It is not impossible, but for him it is more difficult than for me", he told.

Of course, that was not Valdeno Brito’s problem. Pole-sitter for the third time this season, the Shell Racing driver wants to say farewell to his team in the best fashion possible. "My last race with the team, and it couldn’t be better with pole position. The car is absolutely quick and I will try to achieve the victory as a way to say thank you to the guys", he highlighted.

The title-decider starts at 10 o’clock (Brazilian Time) this Sunday with a 40-minute plus one lap race. Double points will be awarded.