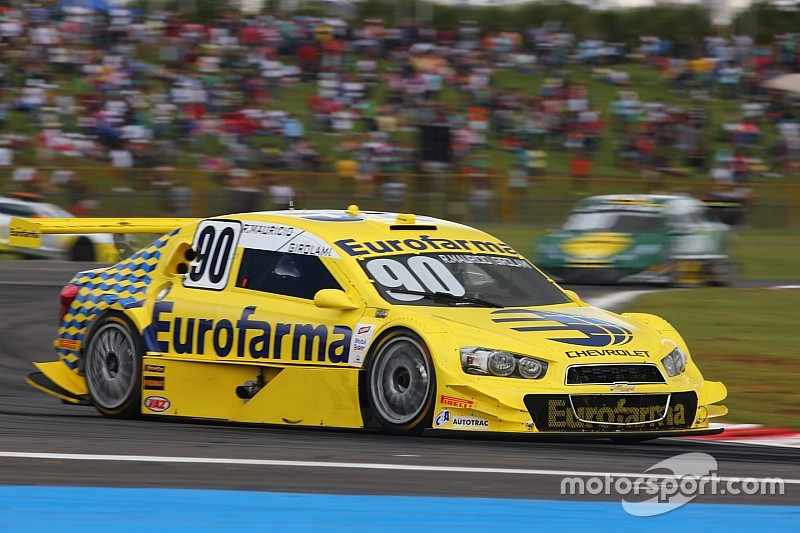 Crowded grandstands, sunny Sunday and two heats filled with different strategies; Fraga now 37 points ahead in front with only one race to go

Brazilian V8 Stock Cars made it debut the past weekend in the state of Minas Gerais. The ‘Circuito dos Cristais’ in Curvelo, with its challenging features, produced two very well balanced races this sunny Sunday. Packed grandstands with a total of 42,000 people watched Felipe Fraga win for the fifth time this season, and extend his championship lead to 37 points over Rubens Barrichello. On race two, Ricardo Maurício won for the first time this season after taking victory a hundred meters before the finish line.

Race one started and the battle for the lead was summarized between Fraga and Barrichello in the first ten laps, when the duo swapped positions four times. Then, Felipe’s teammate Marcos Gomes made a move on the 2014 champion to take second place. Barrichello, then, was overtaken by his teammate Allam Khodair and dropped to fourth.

While Fraga was not bothered by his Cimed Racing colleague, Barrichello settled behind Khodair in a clear strategy to save fuel and avoid a pit stop on race two. In the final laps, the #111 made a move on his Full Time teammate to get the final podium position.

As for Fraga, his fifth win this season - all of them clinched on race one -, and he praised the work of his team, who had also put him on pole position on Saturday.

"It was a calm race from our side. Only in the restart I think my push to pass button didn’t work, and Barrichello got past. Then I had to get my position back. I have to thank the whole team and Marcos as well for the great team work. I really enjoyed racing in this new track", Felipe Fraga said.

After the podium, all thoughts were on the second (and shorter) race of the day. The big question was the safety car: if it had to intervene, then everyone who hadn’t pitted in race one would be able to save fuel.

Well, it did not. Rubens Barrichello moved up to third in the beginning, and ahead of him were, fighting for the lead, Diego Nunes and Átila Abreu. With four laps to go, the leaders went together to the pits. Barrichello took the lead with a good advantage on Julio Campos.

Ricardo Maurício, who started race one from the pits, had a better pace and was followed by a refueled Tuka Rocha moving up into the field. Campos had to lift if he wanted to finish - he did, in P8 -, and while Maurício and Rocha kept fighting, Rubens could still save some more gasoline.

However, they soon joined the leader. With a lap more of fuel in his tank, the Eurofarma-RC driver went on to take the lead from the Medley-Full Time racer. Barrichello managed to keep him behind in an extraordinary way, but after they left the last corner to the chequered flag, the leading car lost speed. Barrichello was out of fuel a hundred meters from the finish line.

"Starting from the pits gave me this extra lap of fuel", Ricardo Maurício stated. "I had to start last due to a penalty, so we have chosen to start from the pits. This way we did not do the formation lap, saving three of four liters of gasoline", he explained. Tuka Rocha took his second Stock Car podium after finishing second for the RZ Motorsport team, with Red Bull’s Daniel Serra third.

For Barrichello, a flashback: he went through the same situation at the F1 Hungarian Grand Prix in 1995, when he was third until the last corner when his Jordan-Peugeot stopped on the track. In Curvelo, he still managed to complete the race in 11th, saving precious points.

"I saved a lot, and I think nobody got to the end. I almost did it", he said. "Nowadays the other drivers are calling this work of saving fuel ‘The Rubens Strategy’, which is very cool to be recognized in this fashion. It is a shame we did not win, but we missed it by very little", Rubens said.

Ricardo Maurício confirmed Barrichello’s words. "He is a master in saving fuel; he managed to save much more than the other drivers. His car failed in the last corner and I could win", he told.

Now, Brazilian V8 Stock Cars heads to Interlagos for the final race. There will be 60 points at stake. Felipe Fraga have a 37-point advantage on the F1 veteran (282 to 245). The 2016 champion will be known on December 11th.

*Results subject to official confirmation by the stewards

Brazilian V8 Stock Cars: The countdown to the title-decider is on