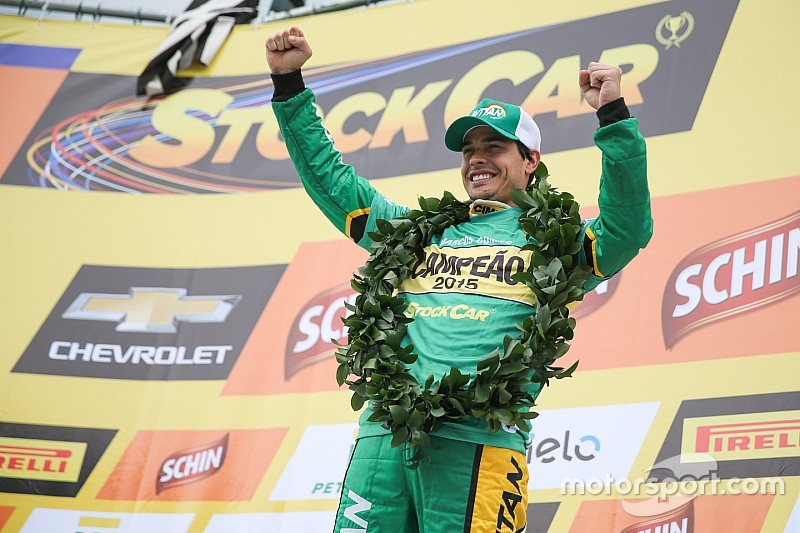 Both Gomes and Cacá Bueno faced lots of trouble during the first stage of the race, won by Mobil AMG’s Átila Abreu, followed by Diego Nunes and Felipe Fraga

Marcos Gomes is the new Brazilian V8 Stock Car champion. The 31-year-old driver, son of the four-time Stock Car champion Paulo Gomes, is the first ever to repeat his father’s feat in the country’s most prestigious series. It came the hard way, though: a six-car crash in Turn 4 took Rubens Barrichello, Beto Monteiro, Rafael Suzuki, Max Wilson, Bia Figueiredo and Allam Khodair. Ana Beatriz and, later on, Marcos Gomes, got back to the track, far behind the leaders.

For Gomes luck, Cacá Bueno also involved himself in a smaller crash that damaged his bonnet, and he could not go as far as the 20th place - not enough to whom needed at least a fourth place finish (in case of a Gomes’ DNF) to get his sixth title.

However, Marcos, inside the car, wasn’t worried about where his rival was at the track. He only wanted to finish the race, even though seven laps behind the leaders. "I’m one of the happiest people on earth today. I saw a movie in my head. A horror movie. Cacá also had his back luck and did not reach the points he needed. But we won this title on the other 11 rounds", celebrated Gomes. "I was far behind and there was nothing I could do. At the beginning of the season I knew it was possible to fight for the title, but this season was a dream", he told.

"Marquinhos deserve the title", stated Cacá Bueno. "His team made a great work. But we cannot forget that I got suspended of one round in Curitiba were Marcos scored 34 points, andour difference at the end was only of 32 points. Unfortunately, that jeopardized me and made me get to the final round needing an improbable combination of results. I am sure, though, that we will come back stronger in 2016", he said.

Átila Abreu said farewell to his Mobil AMG team in great fashion. After Valdeno Brito’s disqualification by missing the brake lights, the 2014 runner-up could win for the first time this season. "I spent seven great years at AMG, and I don’t say goodbye; I’d rather say ‘see you soon’. It is the end of an era with this guys, a very good team, with very good people, and I wish them all the best in the future", says Abreu, who will replase Brito at Shell Racing alongside Ricardo Zonta in 2016.

Next season starts on March 6th at Curitiba.