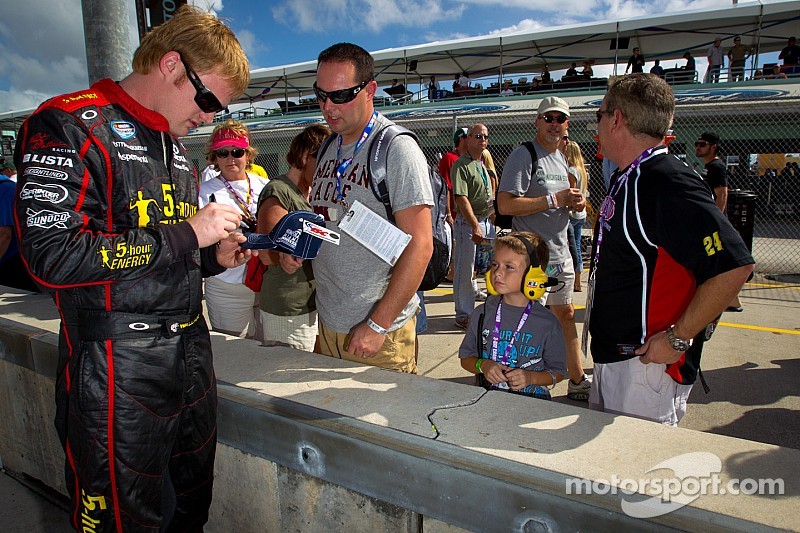 NEW SMYRNA Beach, Florida -- The 37-car field was packed with better-known drivers, such as NASCAR’s Johanna Long, Steve Wallace, son of NASCAR champ Rusty Wallace (in photo above); Harrison Burton, son of NASCAR’s Jeff Burton, and three-time champ Augie Grill, but it was Travis Cope who made a daring pass on the next to last lap to take the 49th Annual Govenor’s Cup race Sunday at New Smyrna Speedway in Florida, just south of Daytona.

Cope, son of Mike Cope, two-time NASCAR All Pro champion former NASCAR Nationwide series driver, passed Bobby Good with one lap to go for the biggest win of his career. “I can’t believe it,” a near-speechless Cope said in Victory Lane. Good did all he could to hold off Cope’s charge, but fading brakes meant the difference between a win and second place.

For a while, it looked like no one wanted to win the 200-lap race. Early leader Jeff Choquette was passed by Augie Grill a third of the way through the race, but Choquette didn’t like the way Grill got by and dumped him in the next turn, collecting several other drivers including Bubba Pollard and Johanna Long, who couldn’t continue. Grill was done for the day, and officials black-flagged Choquette, a very popular decision with the large crowd.

T.J. Duke led before he was passed by Florida legend Wayne Anderson, who pledged to hang up his helmet if he won the race for the fourth time. And it looked like he was going to, but with 70 laps to go during a caution, officials pulled Anderson to pit road to investigate reports that his number 84 car was leaking fluid. It was, from the rear end, and his crew couldn’t repair it, so another leader was behind pit wall.

It wasn’t easy for Cope, either, whose qualifying effort was negated when a crew member worked on the car when he shouldn’t have, sending Cope to the rear. And he had to overcome spins, too. Good finished second, followed by Steven Wallace, and 14-year-old Harrison Burton. Contact ended the day early for Michael Lira, that ARCA racer who is one of NASCAR’s Drive for Diversity participants.

Many of the competitors in Sunday’s race, from as far away as Canada and Utah, were using the Governor’s Cup as a tuneup for the Snowball Derby, which will be held at Pensacola, Florida’s Five Flags Speedway December 7. Entrants in that race include Chase Elliott, John Hunter Nemechek, Erik Jones, Corey Lajoie, Spencer Gallagher, Ross Kenseth, Kyle Grissom, Chris Fontaine, Mason Mingus, Ben Kennedy and Grant Enfinger.