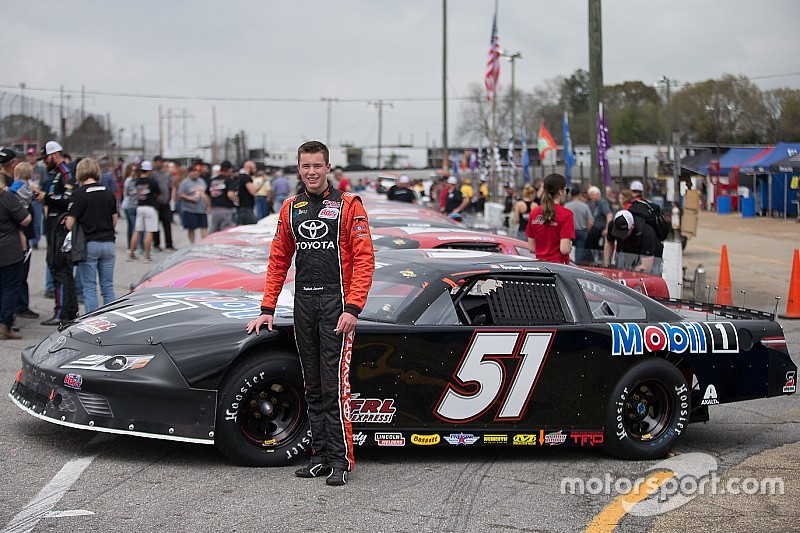 Despite running for the leaders for most of the race, Raphaël Lessard had to be content with a 12th-place finish at the Cloer Construction 300 held at Hickory Motor Speedway.

The 150-lap feature was a round of the CARS Response Energy Tour. Lessard, who won this race twice in the past years, was behind the wheel of the Super Late Model No. 51 Toyota Camry 51 FRL Express/Mobil 1/Toyota of Kyle Busch Motorsports.

Things started on a bad note for the Canadian teenager as a yellow flag was displayed during his qualifying effort, resulting in a not-so-satisfying ninth place on the grid.

By Lap 12 of the race, Lessard, a member of the Toyota Racing Development program, was up in second place. Despite the numerous cautions, Lessard remained in touch with the leader of the race, while managing his tires. On Lap 143, he slipped into the lead and seemed to be en route to victory.

However, his main rival, Brandon Setzer, attempted a last-lap pass for victory. He made contact with Lessard in Turn 1, sending the Toyota up near the wall, allowing him to take the lane and dash to the lead. Seconds later, Lessard drove into Turn 3 to repay the favor and Setzer spun in front of the field. Yellow flags were quickly waved, but not before Chandler Smith nearly destroyed his car in the inside wall after making contact with Lessard on a last-second effort to race to the line for what he thought was the finish.

For a green-white-chequered restart, Lessard was placed at the tail of the field for his offense with Setzer, leaving Chandler Smith and Dilbeck on the front row with the latter taking victory, and Lessard crossing line in 12th place.

“I am very disappointed by the whole thing, and I cannot understand the call the series made,” Lessard commented after the race. “The result does not reflect the spirit of the race nor the efforts Team BKM put into that race. I was driving a very good, extremely well prepared by KBM. I am very disheartened.”