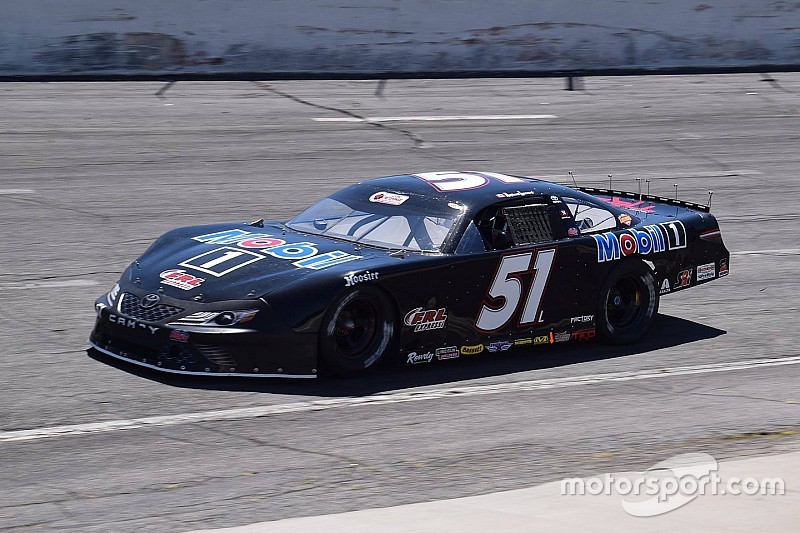 This race was a joint venture for the Super Late Model competitors of the CARS Response Energy Tour and Southern Super Series (SSS).

At the wheel of his Kyle Busch Motorsport No. 51 Toyota Camry FRL Express/Mobil 1/Toyota, Lessard took the start of the race scheduled for 150 laps around the 3/8-mile oval.

After a rocky start to the race, which saw 12 cars get caught in a pile-up, the race was red flagged for about half an hour.

The race was restarted, and Lessard quickly found out that the handling of his Toyota was not to his liking. “I had trouble finding grip. I decided to pit earlier than scheduled, because I wanted to team to try to fix it. They did a great job and I rejoined the race in 12th place and the car was handling much better and I quickly made it into the Top 10,” Lessard explained.

After the competition yellow that saw him took two new tires, the teenager pushed hard and ran as high as third before he had to settle for fourth position at the finish.

“My car was really good on the outside line, but we needed a lot of speed to stay there,” Lessard explained. “We had good speed, but we needed just a little bit more speed to be in the fight for victory. There were several cautions, and I was often forced to restart from the outside line, which kind of penalized me. In all, fourth place in not a bad result in these circumstances.”