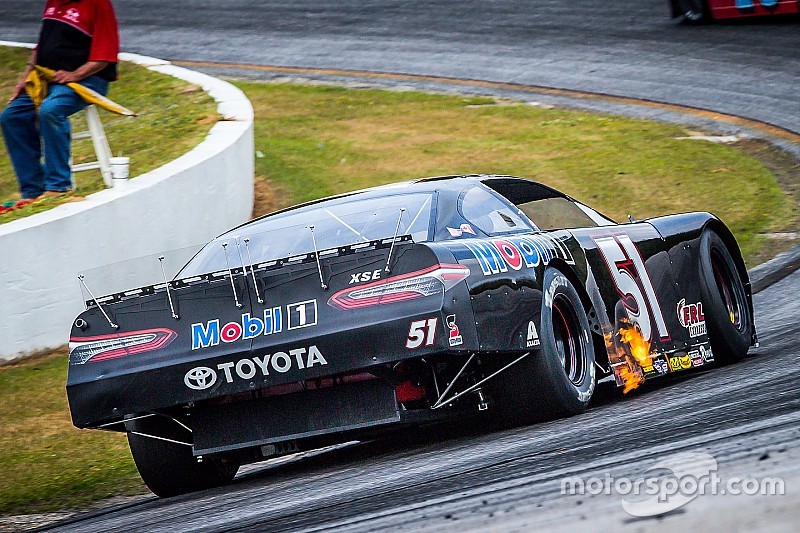 Canadian teenager Raphaël Lessard made a return to the CARS Tour series at the Myrtle Beach Speedway where he claimed a sixth place finish.

Lessard, a member of the Toyota Racing Development program (TRD) and 2016 CARS Tour Champion contested the 100-lap, BakerDist.com 200 presented by Honeywell race this past Saturday.

His weekend started on a promising note when he set the fastest lap in practice in his Super Late Model Toyota Camry No. 51 FRL Express/Mobil 1/Toyota prepared by Kyle Busch Motorsports and then captured pole position ahead of Jeff Fultz.

Lessard made a good start and led the opening lap of the race. However, the team’s strategy was to preserve the tires as much as they could. Indeed, Myrtle Beach Speedway is a very abrasive track where tire preservation is essential.

So, the youngster slowed down a bit and lost positions. He even dropped to the tail of the pack, before making his way up to the front of the field at the halfway mark. Lessard was running 11th when the competition caution was given to the field on Lap 70 and made a pit stop to change two right-side tires and made some adjustments to the car.

After the restart, Lessard passed a few rivals and made it to sixth place. A caution flag was brought out with only five laps to go. Even though the field was very close during the restart, Raphaël was not able to gain momentum and win that race for a second time, claiming an unrepresentative 6th place.

“I am very disappointed with the result, more so that we had a very fast car at the beginning of the race,” Lessard declared. “Unfortunately, the car was not to my liking after the pit stop. I still want to thank Kyle Busch Motorsports who did an outstanding job on my car, as well as Toyota, my partners and my parents.”