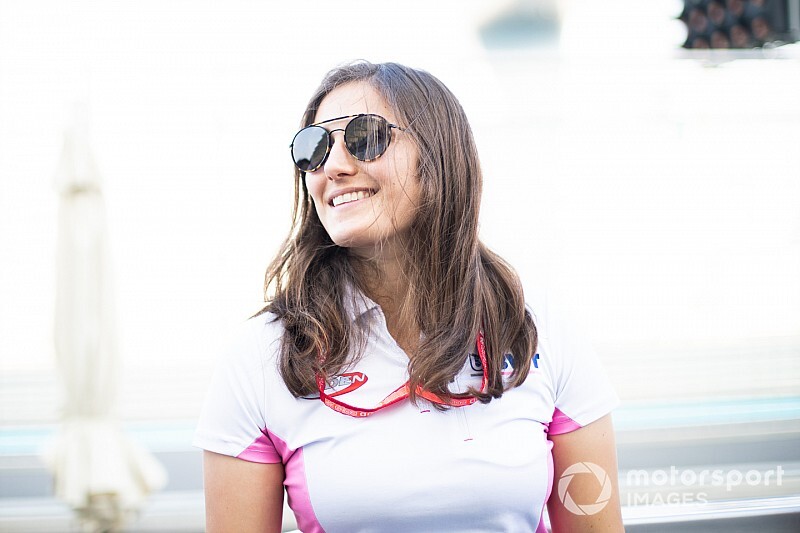 Tatiana Calderon has secured a surprise switch to Super Formula, becoming the first female driver to compete in the Japanese series.

Calderon will drive for the Honda-powered Drago Corse squad, which returns to the grid this season after a brief stint in the championship between 2014-16.

The Colombian has primarily competed in Europe hitherto, and finished 22nd in her maiden Formula 2 campaign in 2019 with Arden.

“With ThreeBond DragoCORSE participating in the Super Formula series from this year, we conducted an extensive search for a driver and decided on Colombian female driver Tatiana Calderon,” said team owner Ryo Michigami, who will continue to drive for Drago Corse in SUPER GT’s GT300 class.

“With this, we have fulfilled another of my wishes for ThreeBond DragoCORSE: to always strive after new things and create history.

“I would like to express my heartfelt appreciation to ThreeBond Co., Ltd., who gave us this chance, and to all who put their efforts into this team.

“I encourage you to be on the lookout for ThreeBond DragoCORSE and the girl power of Tatiana Calderon. And I hope to see all of our fans at the circuit!”

Calderon will be one of the several rookies to race for Honda this season, after the Sakura-based manufacturer revealed its full Super Formula line-up at the Tokyo Auto Salon on Friday.

The most notable of all is Red Bull protege Juri Vips, who will undertake a first full campaign in the series after making his series debut at the Suzuka title decider last year. The Estonian will again partner 30-year-old Tomoki Nojiri at Mugen.

Pietro Fittipaldi’s return to Super Formula was confirmed in December, the Brazilian signing up a deal with the B-Max with Motopark team.

Fittipaldi was due to contest the full 2017 season with Team LeMans, but ended up only taking part in the season opener following his horrific crash in the FIA World Endurance Championship race at Spa.

The Brazilian driver will be joined at B-Max by Japanese F3 graduate Charles Milesi, who replaces DTM-bound Lucas Auer in the team.

Toshiki Oyu will also step up from All-Japan F3 after signing a deal to partner Tadasuke Makino at Nakajima Racing. Oyu takes the place vacated by last year’s standout rookie Alex Palou, who will switch to IndyCar this year with Dale Coyne Racing.

There are no changes in the line up of last year’s championship-winning team Dandelion, which will continue to field Naoki Yamamoto and Nirei Fukuzumi.

Friday’s announcement crucially leaves out Formula 2 race winner Nobuharu Matsushita, who was widely expected to make a switch to Super Formula after failing to secure the necessary points to obtain a superlicense.

However, a seat remains vacant at the one-car Real Racing team.