Kamui Kobayashi admits that a “demon” flatspot he picked up while trying to pass Alex Palou at Motegi cost him the chance to fight for his first Super Formula win.

The KCMG driver had climbed from seventh to third place and was shadowing the Nakajima Racing car of Palou in the fight for second, only to suffer a major lock-up on lap 35 of 51 at Turn 11 as he tried to pass his rival around the outside.

Kobayashi stayed out until lap 42 to swap his soft tyres for mediums, jumping Palou in the process, but says he could have gone even longer if he didn’t damage his tyres.

“When I tried to overtake Palou, I locked the tyres hard,” the ex-Sauber and Caterham Formula 1 driver admitted. “Then it felt like the tyres were about to explode.

“The flatspot that was created generated a demon-like vibration. As I continued to run, I could see the outer layer of the tyre peeling away, and I thought there could be an explosion – so that determined the timing of the pitstop.

“Without that, I could have had two or three more laps [before the stop] and there may have been a chance [to challenge Hirakawa]. But it was all I could do.”

Kobayashi also admitted that getting stuck in fourth behind the Dandelion Racing machine of Nirei Fukuzumi earlier in the race proved costly.

“I didn’t think I’d have to overtake [Fukuzumi] because I started with a full tank,” he added. “But the moment Hirakawa overtook Palou [for the lead], I had to do it too. But it wasn’t easy.

“I think the opportunity [to win a race] will come if we continue this way, so I want to continue fighting in the last two races [of the season].”

Hirakawa’s victory marked the Impul driver’s first points-scoring finish since last year’s Okayama race, as well as his first win in a single-seater since 2012.

Polesitter Palou had built a small advantage initially, but Hirakawa was able to close back in on the Spaniard and finally pass on lap 23, before pitting on lap 37.

“The first five or six laps, Palou was faster, so I restrained myself,” recalled Hirakawa. “I was watching the situation. Then his pace dropped, so I pushed and attacked.

“[At first] I couldn’t overtake, but after that I pretended I wasn’t very fast and straight away it started working and I was successful.

"I was confident since Friday [when Hirakawa topped practice], so I had a feeling I could do it." 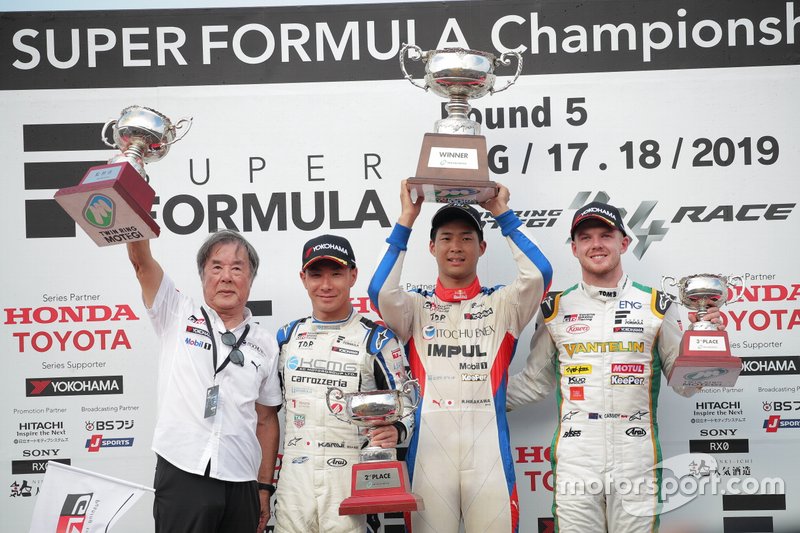