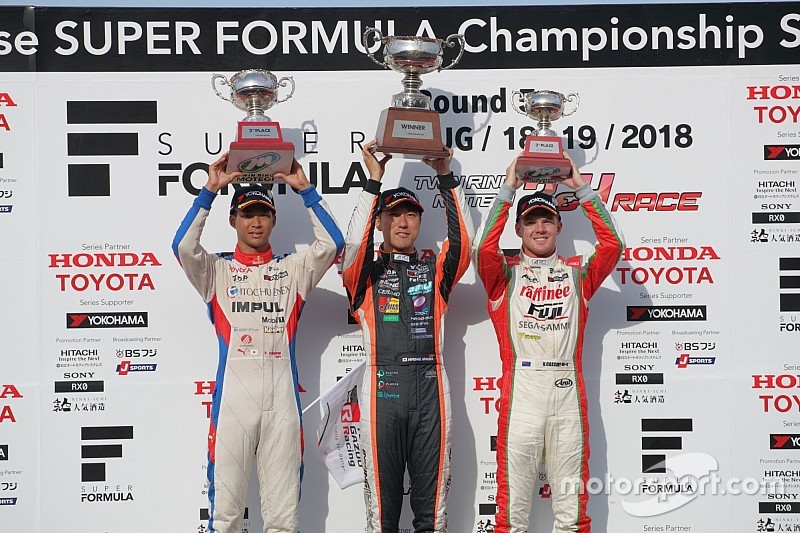 Hiroaki Ishiura claimed victory in the fifth round of the 2018 Super Motegi season at Motegi despite losing the lead at the start of the race.

Honda junior Nobuharu Matsushita was on the move when the 52-lap race got underway, making quick work of teammate Tomoki Nojiri at turn 2 before reeling in Ishiura at the very next corner.

Matsushita and Ishiura then ran in close formation for the first half of the race, the gap hovering at around one second for the majority of the duration.

After fending off some late attacks, Matsushita dived into the pits on lap 27 but came out behind Kazuya Oshima and Yuhi Sekiguchi, both of whom were due to make another stop.

The former Formula 2 racer was unable to pass either of the two drivers and started losing as much as three seconds per lap to Ishiura, who stayed out for another 13 laps before making his pitstop.

As a result, the defending champion was able to pit and still come out in the lead of the race, going on to secure his first victory of the season.

Ryo Hirakawa started only ninth on the grid, but made a two-stop strategy work to finish second. Hirakawa rose up to third in his first stint and made some more bold moves after his first pitstop to finish just 2.724s behind Ishiura.

Fuji winner Nick Cassidy claimed the final spot on the podium with an alternative strategy of his own from fifth on the grid.

The Kiwi started on the medium tyre but switched to softs as early on lap 10, using the extra pace of the grippier tyre to move his way up the pack.

When Matsushita was stuck behind Sekiguchi, Cassidy found his way past the Honda junior to finish third and seize the championship lead from Naoki Yamamoto.

Front-row starter Nojiri ended up eighth, while James Rossiter missed out on points by just 1.286s despite gaining nine places on the opening lap.

Koudai Tsukakoshi completed the top 10 after overtaking ex-Formula 1 driver Narain Karthikeyan, who had started fourth but lost places on a conventional soft/medium strategy, on the final tour.

Nirei Fukuzumi made a dismal return to Super Formula after missing three races due to F2 clashes, winding up 17th after two separate incidents.

Red Bull could send two drivers to Super Formula in 2019