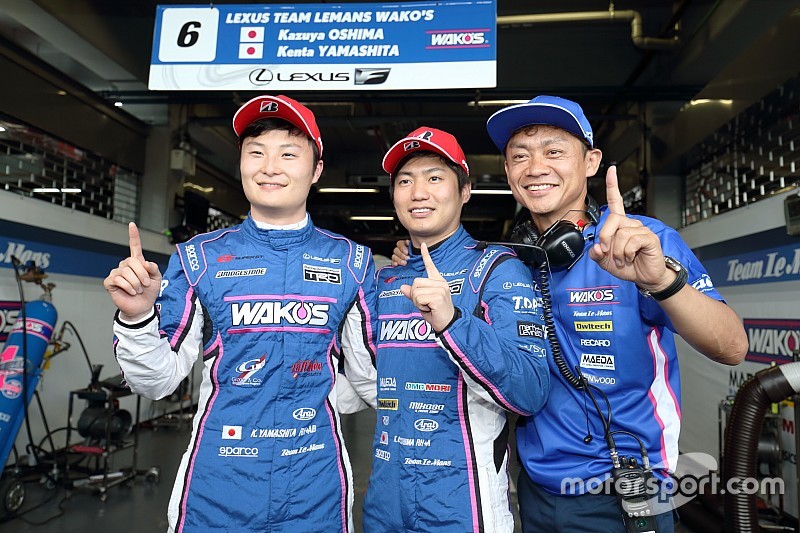 It was TOM’S Lexus driver Kazuki Nakajima who set the first competitive lap in Q2, clocking a time of 1m23.457s to go to the top of the timesheets.

Nakajima was almost immediately dislodged from the premier spot by the Bandoh Lexus of Yuji Kunimoto, the 2016 Super Formula champion nearly eclipsing the track record of 1m23.341s.

In the end, however, it was Yamashita who secured a surprise pole position with a time of 1m23.260s in the Lexus he shares with Kazuya Oshima,

Kunimoto's previous time of 1m23.350s was good enough to secure a spot on the front row for himself and teammate Sho Tsuboi, ahead of the B-Max Nissan of Frederic Makoweicki and Kohei Hirate which topped the sole practice session ahead of qualifying.

Nakajima and his #36 TOM’S teammate Yuhi Sekiguchi slipped to fourth in the final classification, ahead of the sister #37 TOM’S car of 2017 champions Nick Cassidy and Ryo Hirakawa.

Jann Mardenborough and Mitsunori Takaboshi qualified sixth in the Kondo Nissan, only two of the four-GTRs to make it to the second leg of qualifying.

Jenson Button and Naoki Yamamoto finished as the top Honda drivers in the #1 Kunimitsu NSX-GT, the former ending up 0.476s off the pace in Q2.

Button and Yamamoto will share the fourth row of the grid with fellow Honda team ARTA, piloted by Tomoki Nojiri and Takuya Izawa.

Impul and NISMO made it an all-Nissan fifth row, with James Rossiter and Daiki Sasaki beating the fully factory-entered car of Ronnie Quintarelli and Tsugio Matsuda by less than a tenth of a second.

The championship-leading Cerumo Lexus, saddled with ballast equivalent to 53 kg, will start on the back of the grid, after ending up 1.3s off the pace in qualifying.

Toyota squad Tsuchiya Engineering claimed its second consecutive pole in the GT300 class and first in Thailand since 2016.