Gotemba - Dutchman Carlo van Dam raced his Honda HSV-010 to seventh place in the shortened first heat of last weekend’s Sprint Cup at the Fuji-circuit, which traditionally marks the end of the Japanese Super GT season. 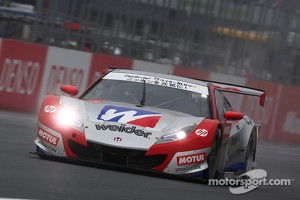 “The Sprint Cup does not count towards the championship, but is always staged after the final championship round of the year”, Carlo explains.

“The two drivers that normally share a car, now each do one sprint race individually. On Friday, time was thus pretty limited, because you still share the car during the one-hour free practice session. Our car really hasn’t performed well at Fuji all year, but at least I was a second quicker in qualifying compared to [team mate] Takashi Kogure.

“I did the first race, on Saturday. It rained hard, but I had a good start and rose from tenth to fifth place in the first two laps, before it started to rain even harder. The ride height of the car was basically too low and so it was all over the place even in a straight line. Consequently, I was running seventh by the time the safety car came out to effectively end the race because of the rather extreme conditions.”

On Sunday, Takashi Kogure finished seventh, too, in the second race of the Cup.