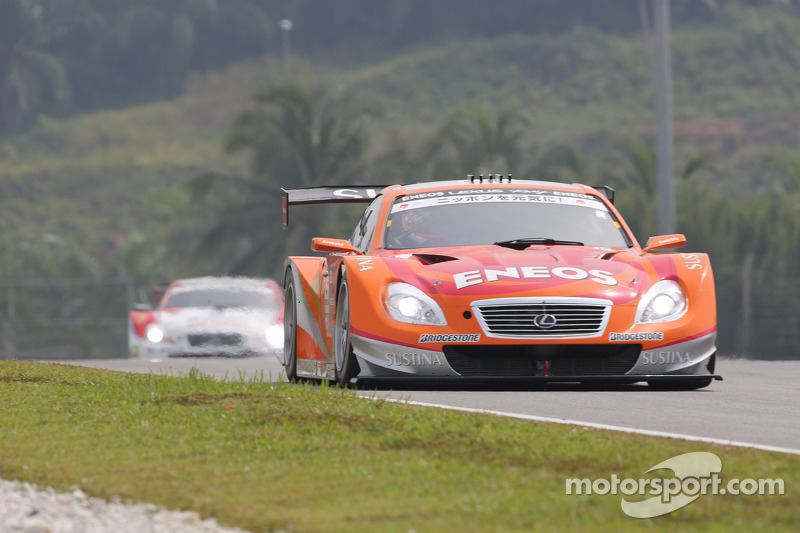 In the GT500 class qualifying, the No. 6 ENEOS SUSTINA SC430 driven by Kazuya Oshima and Yuji Kunimoto won the pole position.

The qualifying for the MOTEGI GT 250km RACE, Round 8 of the 2013 AUTOBACS SUPER GT series, took place at the Twin Ring Motegi (lap = 4.801 km) in Tochigi Pref. on November 2. In the GT500 class qualifying, the No. 6 ENEOS SUSTINA SC430 driven by Kazuya Oshima and Yuji Kunimoto won the pole position (fastest qualifier). In the GT300 class, the No. 61 SUBARU BRZ R&D SPORT driven by Tetsuya Yamano and Kota Sasaki won a record-breaking fifth pole position of the season. In the final race to be run on the Nov. 3, these two machines will start from the front of their respective class grids.

On this day the skies were cloudy over the circuit but there appeared to be no fear of rain. In the afternoon, the qualifying to decide the starting grids for the Sunday race began at 2:00.

The qualifying was run in a two-session format (Q1 and Q2) with all the cars running in the 15-minute Q1 and, in the case of the GT500 class, the top eight cars proceed to Q2. The GT500 class Q1 began at 14:15. The drivers confident in their skills sat out the first half of the session and waited until the last seven minutes or less to go out on the track make an all-out shot for a fast qualifying time.

The first team to score a top time was the No. 100 RAYBRIG HSV-010 (Takashi Kogure) with a 1’41.996 lap. After that, several machines crossed the control line in attempts to beat that time but all were unsuccessful. Just as it looked as if No. 100’s time would win the pole position, last year’s champion, Masataka Yanagida in the No. 23 MOTUL AUTECH GT-R ran a lap of 1’41.821 to beat the RAYBRIG HSV-010 and finish Q1 as the fastest.

Meanwhile, there were a couple of upsets in the session, as the 2nd and 3rd ranked teams in the season’s drivers championship race, the No. 36 PETRONAS TOM'S SC430 (James Rossiter) and the No. 18 Weider Modulo HSV-010 (Frederic Makowiecki) both failed to make the cut-off for Q2.

Then the 12-minute Q2 session to decide pole position and the other top grid spots began at 15:05. As in Q1, the cars began to take to the track halfway through the session. On its first timed attack Kazuya Oshima in the No. 6 ENEOS SUSTINA SC430 recorded a time of 1’41.367 to move into the top slot on the time board.

After that, the winner of the PP in the last two races, Yuji Tachikawa in the No. 38 ZENT CERUMO SC430, and the Tochigi native Koudai Tsukakoshi hoping to win PP here in his home prefecture driving the No.17 KEIHIN HSV-010, each made attempts but failed to beat Oshima’s time.

Eventually the session ended with the No.6 ENEOS SUSTINA SC430 taking the last pole position of the 2013 season.

For Oshima, this was his first PP since round 3 of the 2010 season at Fuji and his third GT500 class PP overall. For the LEXUS TEAM LeMans ENEOS it was their eighth 8 and for the LEXUS SC430 it was the third in a row, fourth of the season and 18th overall.

The current leader in the season standings, the No. 38 ZENT CERUMO SC430 (Yuji Tachikawa/Kohei Hirate) qualified in 4th position and the 4th ranked No. 17 KEIHIN HSV-010 (Tsukakoshi/Toshihhiro Kaneishi) qualified 2nd, while the currently 5th ranked No. 23 MOTUL AUTECH GT-R (Yanagida/Ronnie Quintarelli) finished the qualifying in 3rd place, thus putting teams lower in the ranking positioned at the front in the grid positions for the race.

This makes not only the outcome of the race but also the resulting winner of the championship title race very difficult to predict at this point. There is no telling what will happen when the race starts at 13:30 on Sunday the 3rd.

In the GT300 class, the No. 61 SUBARU BRZ R&D SPORT driven by Kota Sasaki won the pole position for the fifth time this season. This gave Sasaki his tenth PP in the GT300 class and broke the record for most poles in a SUPER GT season.

Now standing in 5th position in the season ranking, the SUBARU BRZ R&D SPORT team of Tetsuya Yamano and Sasaki will have to win tomorrow’s race in order to stand any chance of a come-from-behind championship title win, which makes this PP especially fortuitous.

The current ranking leader, the No. 16 MUGEN CR-Z GT (Hideki Mutoh/Yuhki Nakayama) qualified 3rd today, meaning they can win the title regardless of the other cars’ results by finishing 2nd in Sunday’s race. So, this result puts them in good position to go for the championship. It is certain to be an exciting race on the 3rd.

Kazuya Oshima (No. 6 ENEOS SUSTINA SC430 [GT500]): “The machine’s balance was good from the time we started running in the morning practice, and it made me feel that we had a good chance to win pole position. But, I also knew that there were a lot of fast cars around us.

Still, I was able to get the best performance in the afternoon and turn in a time a 5th of a second faster than I had anticipated. It has been a very tough year race after race for us, but we were finally able to get a good result at the very last round, even though this is still just the qualifying. I want to see us go on and win the race tomorrow and end the season with a good result.”

Kota Sasaki (No. 61 SUBARU BRZ R&D SPORT [GT300]): “I am very happy to have been able to win our fifth pole position this season. When I began running in the official practice this morning the car’s balance wasn’t good and I was worried about what would happen. However, by the time of the afternoon qualifying, the team had managed to set up the car in wonderful condition for us.

I owe everything to the team who set up a car capable of winning the PP and to [Tetsuya] Yamano for the information he was able to give the team about the car’s condition. This fifth PP is truly one that was won by everyone involved.”

Nakajima, Rossiter claim come from behind GT500 victory at Autopolis