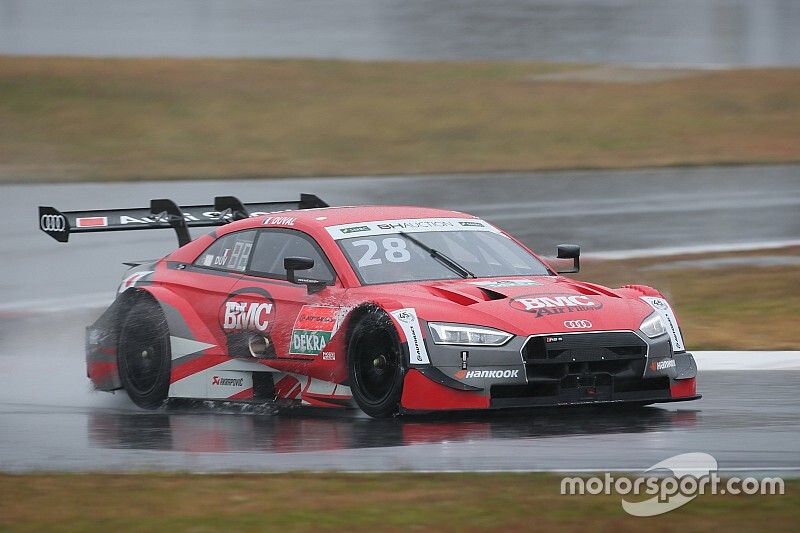 After heavy overnight rain, Sunday morning's qualifying shootout took place on an entirely wet track, and it was Naoki Yamamoto who led for much of the way on a 1m47.118s.

With two minutes left on the clock, Nakajima deposed his fellow Honda runner with a 1m47.003s, although that was soon bettered by Duval, who again emerged as the strongest of the visiting DTM contingent in the Phoenix-run Audi RS5.

Duval was first to dip beneath the 1m47s mark with a 1m46.940s after the chequered flag flew, but the Frenchman was denied pole by Nakajima's final effort of 1m46.696s.

It meant Duval matched his qualifying position from Saturday's first race, although he didn't take the start after aquaplaning into the barriers on his sighting lap.

Narain Karthikeyan also improved on his final lap to put the Nakajima Racing Honda in third ahead of Yamamoto's Team Kunimitsu NSX-GT.

Yamamoto, third in Saturday's first race, is one of only two SUPER GT drivers to be taking part in Sunday's action, with teammate Jenson Button absent.

Audi's Rene Rast was second-best of the DTM runners in fifth ahead of Koudai Tsukakoshi (Real Racing Honda), who finished second behind Nick Cassidy in Saturday's opener.

Marco Wittmann (BMW) and Mike Rockenfeller (Audi) ensured the top eight was evenly split between SUPER GT and DTM runners, while Ryo Hirakawa (TOM'S) was best of the Lexus contingent in ninth ahead of Hiroaki Ishiura (Cerumo Lexus).

Of the remaining DTM runners, Kamui Kobayashi (BMW) was 13th, Benoit Treluyer (Audi) was 15th and Alex Zanardi (BMW) was 22nd and last.

UPDATE: Nakajima was handed a five-place grid penalty as a result of the Mugen squad's chassis change which followed Hideki Mutoh's practice crash on Friday.

It means Audi driver Duval will start on pole ahead of the Hondas of Karthikeyan and Yamamoto, while Nakajima drops to sixth behind Rast's Audi and Tsukakoshi's Honda.