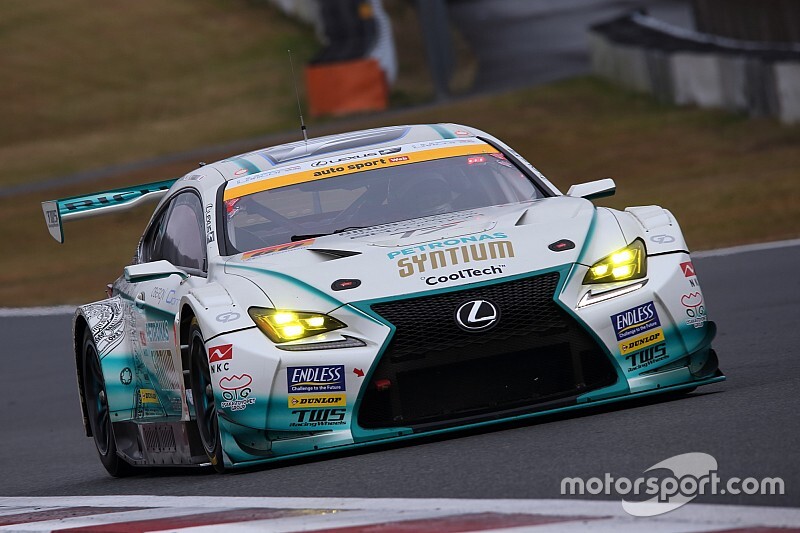 Toyota protege Ritomo Miyata put on a stunning recovery drive to give LM Corsa victory in the Sprint Cup support event for GT300 cars at Fuji, ahead of the SUPER GT x DTM Dream Race.

Miyata, the runner-up in this year's All-Japan Formula 3 championship for TOM'S, overturned a 37-second deficit at the wheel of LM Corsa's Lexus RC F GT3 to secure honours for himself and teammate Hiroki Yoshimoto in damp conditions.

The opening portion of the race was dominated by the NILLZ Racing Nissan GT-R NISMO GT3, which started on slick tyres allowing Masaki Tanaka to build a commanding lead.

Tanaka pitted to hand over to gentleman racer Taiyou Iida at the end of lap 14 of 28, two laps after Miyata took over the LM Corsa Lexus from Yoshimoto.

With his slick Dunlop tyres working well, Miyata started reeling in Iida by three or four seconds a lap, reducing Iida's lead to 20s by the end of lap 20. Four laps later, Miyata was just seven seconds behind, and by lap 27 the two cars were running nose-to-tail.

Miyata completed the race-winning move at Turn 1 at the start of the final lap, having run side-by-side with Iida along the main straight and crossing the start/finish line just 0.005s behind, pulling out a buffer of 2.4s on the final tour to secure the win.

Some 30 seconds the lead pair, the battle for third was resolved in favour of the Saitama Toyopet squad with the Toyota Mark X MC shared by Hiroki Yoshida and Shigekazu Wakisaka.

Yoshida dived up the inside of Manabu Orido's apr Toyota Prius PHV GR Sport at Turn 1 on the final lap, demoting Orido and teammate Hiroaki Nagai to fourth.