SUPER GT’s championship-leading LeMans Lexus team took a shock victory in the Fuji 500-mile race from 11th on the grid after strategically making a pitstop just before a safety car period. 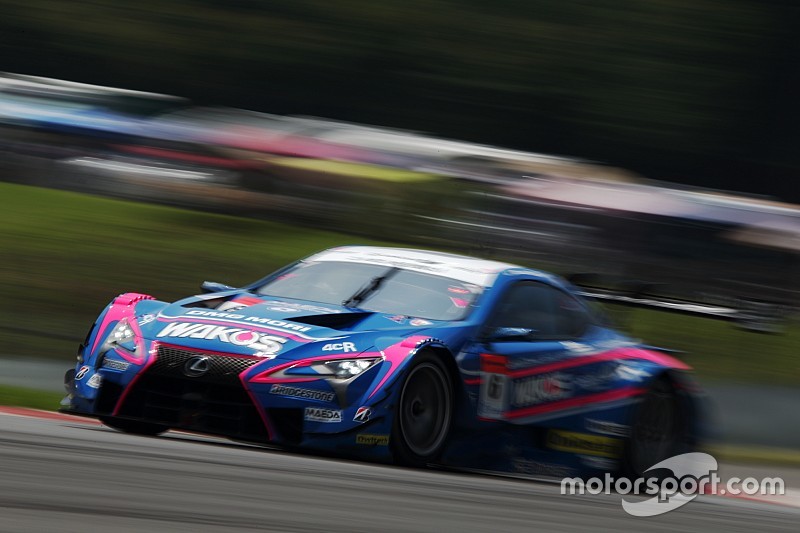 Kazuya Oshima and Kenta Yamashita were left to squabble in the lower reaches of the top 10 in the first half of the race, handicapped by ballast equivalent to 70kg.

However, two safety cars changed the complexion of the race in favour of the #6 Lexus LC500, handing it a second GT500 victory in as many races.

After moving into podium contention with the first safety car period, Yamashita dived into the pits for a third stop just before the second caution was deployed for the stranded Kondo Nissan of Jann Mardenborough, which stopped on the start/finish straight with a blown engine.

Most of the front-runners elected to stay out, including the pole-sitting NISMO Nissan GT-R which had led the most of the race up to that point.

That meant when the leaders finally pitted after the SC period ended, Oshima and Yamashita were left with an unassailable one-minute lead at the front of the field. The two cruised to the finish thereafter, extending their championship lead with five bonus points for the win.

Behind, reigning champions Naoki Yamamoto and Jenson Button finished second to keep their title hopes alive heading into the final three races of the season.

The Kunimitsu Honda duo stayed out of trouble in a race that saw four GT500 retirees and several clashes among the frontrunners, to score their first podium finish since May's first Fuji race.

Ronnie Quintarelli and Tsugio Matsuda had to settle for third, having led the majority of the race in the NISMO GT-R.

The #37 TOM’S Lexus of Nick Cassidy and Ryo Hirakawa finished a strong fourth, having started 14th on the grid and dropped to 12th after the first safety car intervention.

Daiki Sasaki and James Rossiter were fifth in the Impul Nissan, ahead of the Mugen Honda of Daisuke Nakajima and Hideki Mutoh, which secured its best result of the season in sixth.

Among the four GT500 cars to drop out was the Cerumo Lexus of Fuji masters Yuji Tachikawa and Hiroaki Ishiura, which suffered a major shunt at 100R due to a loose wheelnut.

Kazuki Nakajima was running in second position when he hit the #7 D'station Aston Martin Vantage GT3, suffering terminal damage to the front-left side of his #36 TOM'S Lexus car.

The B-Max Nissan of Frederic Makoweicki and Kohei Hirate did make it to the finish, but not before spending several several laps in the garage with a technical issue.

Makoweicki and Hirate had fought with the NISMO GT-R for the lead early in the race, and was able to fight back through the field after being pitched into a spin by the Bandoh Lexus of Yuji Kunimoto.

However, the time spent in the garage left it 11th and last of the classified finishers.

The JLOC team recorded its first GT300 victory of the season, with its #87 Lamborghini Huracan GT3 of Tsubasa Takahashi, Andre Couto, Kiyoto Fujinami winning by a lap.

The pole-sitting #52 Saitama Toyopet Toyota Mach MC of Hiroki Yoshida and Shigekazu Wakisaka finished second after having to make a pitstop after hitting the #88 JLOC Lamborghini.

The #55 ARTA Honda NSX GT3 of Nirei Fukuzumi and Shinichi Takagi finished sixth to extend its lead in the championship.

The #25 Tsuchiya Engineering Toyota 86 MC of Takamitsu Matsui, Takeshi Tsuchiya and Kimiya Sato took an early lead in the race, before a slow stop left it down the order.

The team was eventually forced to retire, Matsui pulling over on the outside of the Dunlop chicane in the final 30 minutes.