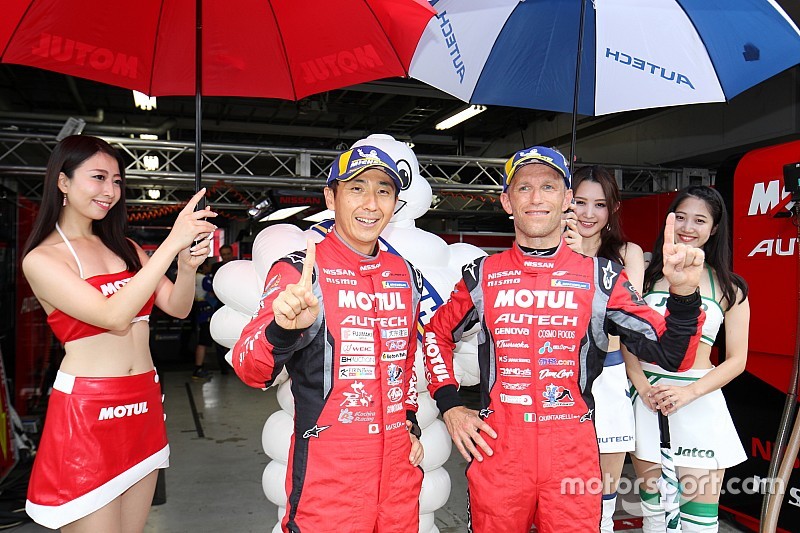 Nissan dominated qualifying for the Fuji 500 miles Super GT round, with factory duo Ronnie Quintarelli and Tsugio Matsuda claiming pole position for the longest race on the calendar.

ARTA Honda's Takuya Izawa led the majority of qualifying with a time of 1m29.563s, before a flurry of late improvements dropped the ex-GP2 driver down the order.

Satoshi Motoyama was the first driver to improve on Izawa’s benchmark, lapping the Fuji Speedway in 1m28.872s to move atop the leaderboard.

Quintarelli then managed to go even faster in the NISMO-run GT-R despite ballast equivalent to 62 kg, setting a time of 1m28.461s with just 45 seconds remaining to take provisional pole.

He was even faster on his last lap but backed out in the final sector after it became evident that his previous flyer was quick enough to top qualifying.

Mitsunori Takaboshi qualified second in the Kondo GT-R he shares with Joao Paulo de Oliveira, ensuring Nissan locked out the front row of the grid.

Takaboshi ended up just 0.032s behind Quintarelli with Yuhi Sekiguchi another 0.256s behind in the #36 TOM’S Lexus that was driven in Q1 by Le Mans 24 Hours winner Kazuki Nakajima.

Motoyama and Katsumasa Chiyo eventually qualified fourth in the B-Max Nissan, ahead of the similar GT-R of Impul pairing Daiki Sasaki and Jann Mardenborough.

Yuji Kunimoto and Kenta Yamashita qualified sixth in the Bandoh Lexus, while defending champions Nick Cassidy and Ryo Hirakawa were seventh fastest in the #1 TOM’S Lexus.

Despite setting the early pace in Q2, the ARTA Honda of Izawa and Tomoki Nojiri could only qualify eighth.

Team Kunimitsu Honda duo Naoki Yamamoto and Jenson Button missed out on a Q2 spot by 0.086s and will line up ninth on the grid, just ahead of the Nakajima Honda of Bertrand Baguette and Kosuke Matsuura.

Yuji Tachikawa and Hiroaki Ishiura will start the race dead last after their Zent/Cerumo Lexus suffered a spectacular brake failure during practice this morning.

Tachikawa, who was then behind the wheel, rammed into the back of the #34 Honda NSX GT3 then driven by Ryo Michigami, causing severe damage to both cars.

The Lexus couldn’t be repaired in time for qualifying, while the damage on the Honda GT300 car was so extensive that the Modulo Corse team was forced to withdraw from the race.

Toyota took GT300 pole honours, with Sho Tsuboi and Takamitsu Matsui the fastest of all in the #25 Tsuchiya Engineering 86 MC.

Tsuboi, who scored a podium on his maiden GT500 appearance earlier this year, lapped the Fuji Speedway in 1m37.312s, beating the #55 ARTA BMW of Shinichi Takagi and Sean Walkinshaw by just 0.014s.

The 10 Gainer Nissan of Kazuki Hoshino and Hiroki Yoshida topped Saturday practice and looked set to replicate Nissan’s GT500 pole, only to be demoted down to third in the final stages.