GRM drivers now rev up, ready to go with the 2013 season

GRM Lexus teams ready for testing on March 16th and 17th in Okayama before the Super GT season opener in early April. 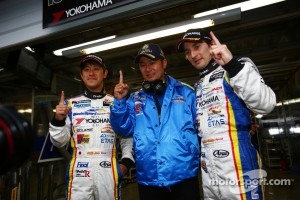 Andre Couto (Portugal) who reminded us all of his true caliber and magnificent skills through the brilliant performances he exhibited last year such as pole position getting and podium finishes, will continue his stride with WedsSport ADVAN SC430 (No. 19) for all eight rounds of the Super GT (GT500 Class) in 2013. And with Lexus Team WedsSport BANDOH led by director Masataka Bandoh, Andre Couto will now and ever more fight enthusiastically at capturing the series champion title; again and together with his trusted teammate, Seiji Ara, who continues to aim and share the same goals as Andre.

Also as in the previous year, Andrea Caldarelli (Italy) in his second season fighting in the Super GT series and again in the GT500 Class, will be united with veteran driver Daisuke Ito to drive with Lexus Team KeePer TOM’S, which is one of the long-established, prestigious teams. Having these drivers in duo and also backed up by the years of experience, KeePer TOM’S SC430 (No. 37) under the conduct of director Masanori Sekiya, shall progress further as bringing on some real racing actions to the circuits. In the meantime, between his race schedules in Japan, Andrea will continue to go on with his work and good collaborations with Toyota Motorsport GmbH (TMG) in Germany, cooperating in the simulator sessions undertaken by this company.

The Super GT series will first meet for official testing during March 16-17 (in Okayama), before opening the 2013 season on April 6th and the 7th for the 1st Round (Okayama).