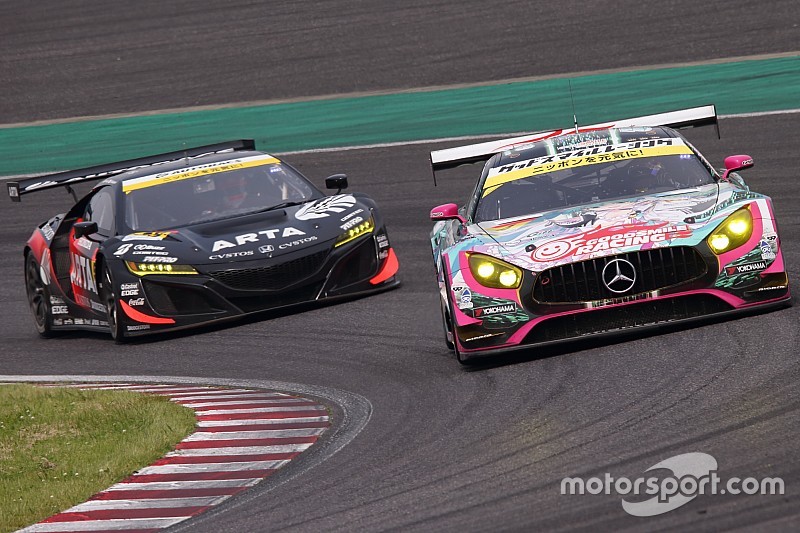 A pair of standalone GT300 races will form the undercard for the historic joint event between SUPER GT and DTM at Fuji Speedway in November.

SUPER GT has always maintained that the crossover race between the two series will be limited to GT500 and DTM cars, with the GT300 cars that normally play the role of support class at SUPER GT races excluded from the event.

However, after final details about the joint race were revealed, SUPER GT has announced that GT300 cars will line up on the grid that weekend in their own special support event.

Two 50-minute races will be held, in a departure from SUPER GT’s long-distance format, each race featuring a mandatory driver change. However, cars will not be allowed to refuel during the pitstop, and there are plans to introduce a minimum stop time for tyre/driver change.

Each driver will be allotted 10 minutes in the sole qualifying session on Friday, with aggregate times from a team’s two drivers taken into account to determine the grid for Race 1. The starting order for race 2 will be determined from the opening race of the weekend.

The support event will be open to all drivers and teams who contested the GT300 class of SUPER GT this season, opening up the possibility of a wide variety of cars, including cars built to FIA/SRO GT3 specification, so-called 'Mother Chassis' cars and JAF-spec GT300s.

The entry list for the event, dubbed the 'auto sport Web Sprint Cup', will be unveiled at a later date.