Honda completed a clean sweep of SUPER GT’s pre-season test at Fuji Speedway, as Tomoki Nojiri put the ARTA squad at the head of the timesheets on Sunday.

The two-hour afternoon session started in damp conditions owing to heavy rain during the morning, but the track had all but dried out by the halfway point.

Saturday’s pacesetter Tadasuke Makino held the top spot for much of the latter part of the session after wresting the advantage away from Cerumo Toyota driver Sho Tsuboi with a time of 1m28.282s early in the second hour.

But the Kunimitsu Honda driver was deposed with around 17 minutes left on the clock by TOM’S Toyota man Ryo Hirakawa, who posted a best effort 1m28.192s.

That looked as if it would be enough to end the day fastest, but a last-ditch flyer by Nojiri at the wheel of the #6 Honda NSX-GT with just 30 seconds remaining resulted in a time of 1m28.059s, good enough to beat Hirakawa in the #37 GR Supra by 0.133s.

Makino’s earlier best time in the #100 Honda was still good enough for third, 0.223s off the pace, but his Saturday benchmark of 1m27.870s was not threatened.

Reigning SUPER GT champion Kazuya Oshima took over the #14 Cerumo Supra from Tsuboi in the closing stages and posted a time good enough for fourth, exactly three tenths off the pace, ahead of Mugen Honda newcomer Ukyo Sasahara in fifth place.

Yuji Tachikawa was sixth-fastest in the #38 Cerumo Supra, followed by Koudai Tsukakoshi in the Real Racing Honda and SARD Toyota substitute Kenta Yamashita.

Nissan enjoyed a smoother day on after its problem-filled Saturday, but concluded the test more than a second off the pace with Tsugio Matsuda ninth in the flagship NISMO entry and Daiki Sasaki completing the top 10 in the Impul-entered GT-R. The Impul car also appeared to suffer a late issue as it stopped on track late in the afternoon session. 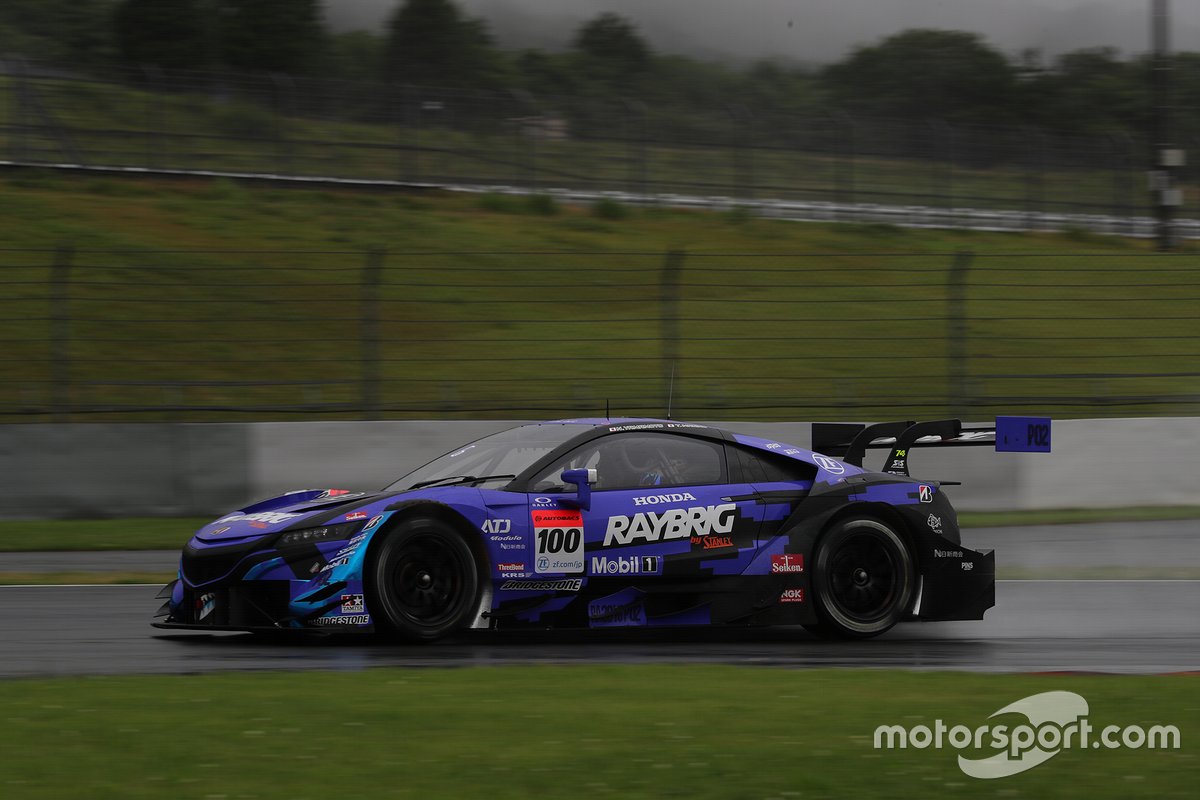 Earlier in the day, Makino had topped the morning session, which was shortened from the originally-planned two hours to 90 minutes owing to the bad weather.

On his 23rd birthday, the ex-Formula 2 driver posted a 1m40.147s with just over a minute left on the clock to better the earlier benchmark set by his Kunimitsu Honda teammate Naoki Yamamoto and end up 0.333s clear of the Cerumo Toyota of Tachikawa.

A late jump up the order by Tsuboi put the sister Cerumo GR Supra in third, a further four tenths behind. Nirei Fukuzumi was fourth-fastest in the ARTA Honda ahead of top Nissan man Ronnie Quintarelli in the NISMO GT-R.

In the GT300 class, factory Subaru driver Hideki Yamauchi set the fastest time of the test with a 1m37.379s best lap at the wheel of the works R&D Sport BRZ. That was enough to beat the Saturday benchmark set by Drago Corse Honda driver Jake Parsons by 0.033s.

ARTA's Honda NSX GT3 suffered a suspension problem early in the afternoon session that forced Toshiki Oyu to come to a stop on track, bringing out the red flags, but Oyu recovered to set the fifth-fastest time of the day late on.

That was the second interruption of the session, as Yuhki Nakayama had crashed the #31 apr Toyota Prius at Turn 5 some minutes earlier. The #31 car was therefore forced to sit out the remainder of the day.

Makino fastest for Honda at Fuji, Nissan in trouble

Nojiri knows title approach “may not be interesting to watch”

Has Sugo weather made a Nissan title almost inevitable?

After last weekend's Sugo SUPER GT race, Nissan Z crews now occupy first, second and third places in the GT500 drivers' standings with two races to go. Jamie Klein says it's hard to shake the feeling that the Yokohama marque is finally on the cusp of ending its title drought.

Team LeMans has put the Audi R8 LMS GT3 Evo II that it currently races in SUPER GT up for sale, as it evaluates a switch of model for the 2023 season.