At the start of the SUPER GT season Toyota looked on course for a comfortable title, but now arch-rival Honda finds itself well-positioned to snatch the crown. Can the NSX-GT contingent pull off an unexpected turnaround behind enemy lines in this weekend’s decider?

It feels like a long time ago now, but when Toyota swept the board with a top-five lockout in the first round of the season at Fuji Speedway back in July, it seemed like 2020 would inevitably be the year of the GR Supra. The sleek new machine with its swooping low bodywork, imposing top speed and supreme race pace would surely be the one to beat, it appeared.

But following the penultimate round of the campaign at Motegi, it's Honda that's the better-placed for the title after matching Toyota’s feat from the curtain-raiser with a 1-2-3-4-5 of its own. That result means all three Bridgestone-shod NSX-GTs are in a winner-takes-all position when the season reaches its climax on Sunday, as are two Toyota GR Supras (incidentally both on Bridgestones) and a lone Nissan GT-R (on Michelins).

If one of the Hondas could pull it off, it would be quite an achievement considering the Sakura marque had to redesign its midship NSX-GT to match the front-engined, rear-wheel drive layout Toyota and Nissan have always used to conform with this year’s GT500 regulations.

“This year’s NSX-GT was still in its infancy at the time of the first round,” reflected Honda SUPER GT project leader Masahiro Saiki after the Motegi race. “I thought there was still room for growth, but I think it’s still getting better. From the second Suzuka race [Round 6], it was around this time I could tell the set-up was improving.

“Even though we locked out the top three on the grid, I never thought we could lock out the top five. Of course this time with the safety car luck was on our side. But looking at all the NSX-GTs, especially in terms of tyre degradation, they were able to run quickly and consistently until the end, which is what led to this result.” 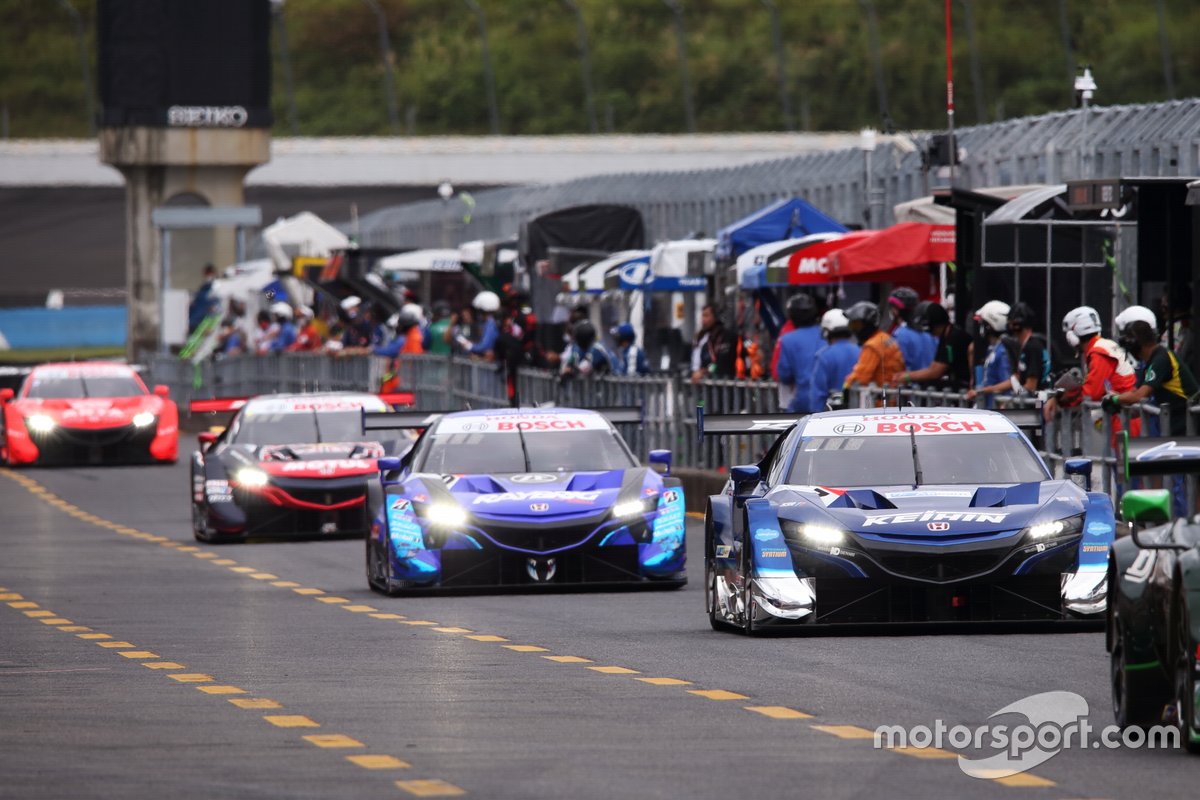 While the Honda has improved through the season, it probably was never as far behind the Supra as that first race initially made it appear. Besides the fact that all three manufacturers were running unproven cars with little in the way of data, that weekend’s race took place in warmer conditions than many teams had anticipated, leading to a wider spread than normal of tyre compound choices. Plus, the #17 Real Racing Honda was ruled out with a turbo failure, without which it most likely would have finished somewhere among the Supras.

Granted, scoring no points in the opener paved the way for Bertrand Baguette and Koudai Tsukakoshi to win next time out with no success handicap, but if they had been further down the order, you could argue the ARTA Honda of Tomoki Nojiri and Nirei Fukuzumi would have won because Nojiri wouldn’t have spun on his out lap under pressure. Either way, the NSX-GT was probably destined to pick up its first win at that early stage, and since then the car has never been off the podium and has only failed to take pole position once.

As Saiki touched upon, Honda’s top-five lockout at Motegi - its first-ever in GT500 competition, and coming while company president Takahiro Hachigo was visiting, no less - was helped by the safety car. But even without that intervention, a convincing 1-2 at the very least was in the offing, and it should be remembered that Toyota’s sweep at Round 1 was also assisted by a caution, prior to which the #100 Kunimitsu NSX-GT was third.

Tadasuke Makino, who shares the #100 car with Naoki Yamamoto, is especially keen to atone for that early-season drubbing this weekend armed with a Honda that is now seemingly much more consistent over a long run than it was back when it made its debut in July, when tyre pick-up was a particularly thorny issue for the NSX-GT runners.

“Toyota managed to sweep the top five in the opening round, so it was good to be able to reply in kind,” said Makino after finishing third at Motegi alongside Yamamoto. “Of course in the opening round we were totally overwhelmed on Toyota’s home turf. Since then however we have made various improvements. [In the opening round] I was passed by a lot of Supras during my stint, so [the final round] is a good opportunity to get revenge.” 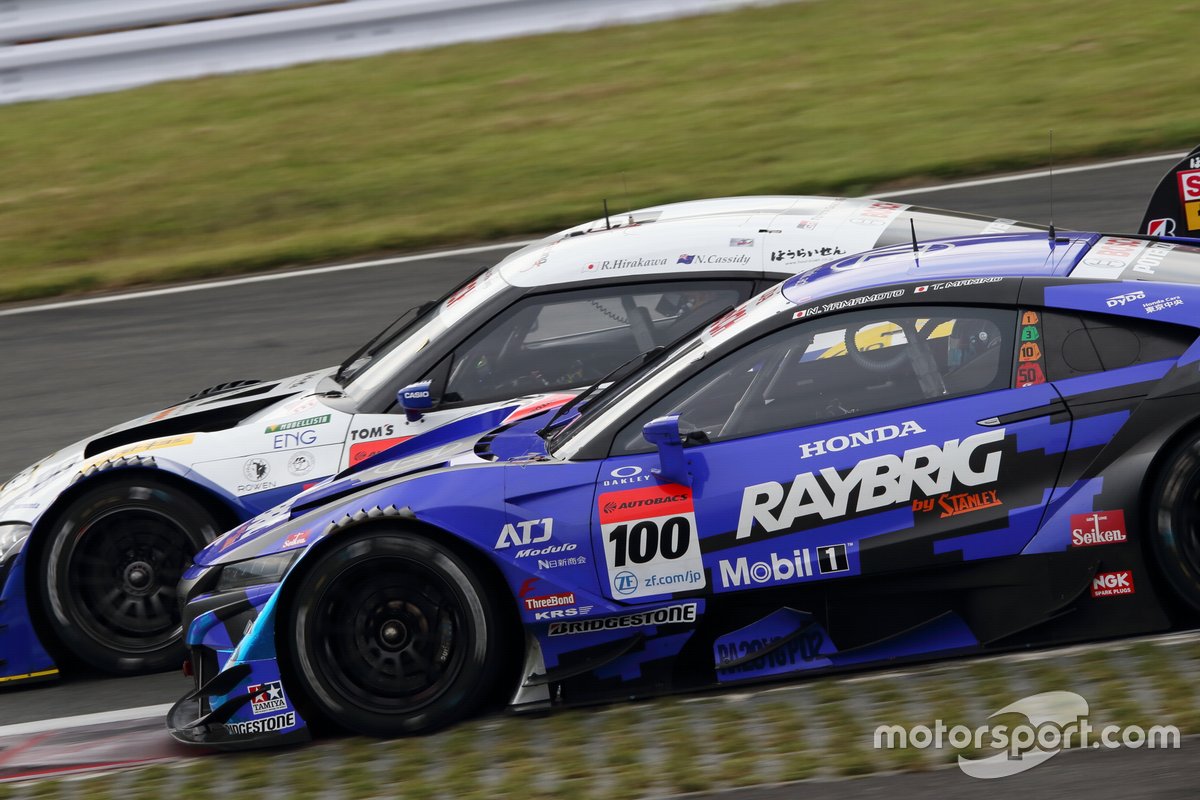 Perhaps a bigger surprise than Honda’s recent strong form has been Toyota’s dip in fortunes. Up to and including Fuji Round 5, there was always a GR Supra crew on the podium, but in Suzuka II the best Toyota was only fifth and in Motegi II sixth. Yes, by the time of Suzuka II pretty much all the GR Supras were saddled with a fuel restrictor, but when the handicaps were halved at Motegi the expected leap forward in performance didn’t really materialise, with only two of the Bridgestone-shod Toyotas able to escape Q1.

Cerumo driver Sho Tsuboi was eager to point out at Motegi that the Toyota has yet to win at a track other than Fuji and has “not been that quick” elsewhere. Indeed, considering just Suzuka and Motegi this year, the GR Supra has only had one second place and one third in those four races, versus two wins and five further podium finishes for the NSX-GT contingent.

Honda also appears to have been boosted by the introduction of its second engine in four of its five cars at Suzuka II (the Mugen car got its fresh unit a race early), especially with regards to fuel economy, and there have been suggestions that the cooler winter air could also favour the NSX-GT, or at least make the top speed deficit less marked than it was earlier in the season.

Make no mistake, Toyota is not out of it. After finishing sixth at Motegi, TOM’S man Ryo Hirakawa jointly leads the standings with Real Racing pair Baguette and Tsukakoshi, and the sixth-placed #14 Cerumo crew is close enough to the summit that Tsuboi and Kazuya Oshima could be crowned if they win this weekend, regardless of what else transpires.

But a Toyota winning the final race is no longer the sure thing it seemed pre-Suzuka II, at which juncture Saiki said he thought Honda would need a buffer heading into Fuji to have a chance. Hirakawa’s chances of winning the title in the #37 TOM’S car have been weakened by Nick Cassidy having to stand aside; the sister #36 machine of Sacha Fenestraz and Yuhi Sekiguchi has lost the consistency that made it an early favourite; and the #14 Cerumo crew are still making a habit of giving themselves more work than they should in qualifying. 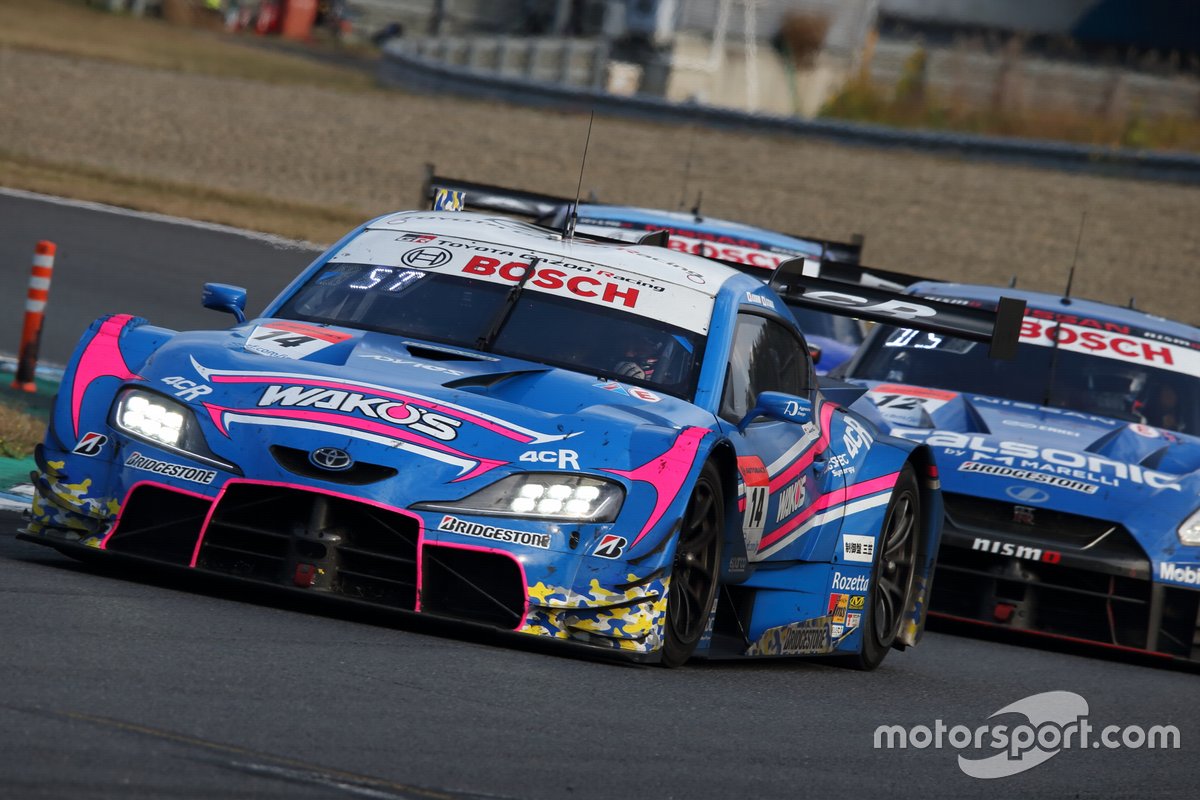 By contrast, there’s one Honda pairing that has momentum firmly on its side. ARTA drivers Nojiri and Fukuzumi have somehow gone from no-hopers to rank outsiders to strong contenders in just three races, and based on their speed in Fuji II and Fuji III and their strong recent form, it would take a brave person indeed to bet against them going all the way.

Fukuzumi, who set the Fuji GT500 lap record in qualifying for Round 1, admitted that “taking ideas” from the other Bridgestone Honda squads on the set-up front has been key to solving their early-season woes. That provides an interesting contrast to the situation at TOM’S, where Fenestraz has implored the #36 side of the garage to stop “pretending we are the best” and investigate properly why the #37 crew has been the stronger car in recent races.

Nojiri and Fukuzumi’s late surge probably wouldn’t have been enough to haul them back in contention in a normal season, but 2020 has been anything but normal. All six of the crews that can assure themselves of the title with victory on Sunday can point to multiple races where they didn’t score as well as they should have. If Hirakawa or the Real Honda drivers win, the maximum score for the season they can achieve is 72 points, which would be the lowest since the 69-point tally that took Kohei Hirate and Yuji Tachikawa to glory in 2013.

That year, nine cars went into the finale with a mathematical chance, and this year 10 of the 15 GT500 squads could conceivably walk away with the prize - which is an indicator of just how strong the field is in the top class, and also of how the strengths and weaknesses of the various manufacturer/tyre packages can vary so much, especially with three new cars and a compressed schedule that allows limited time for analysis between races and no testing.

As these current Class One machines mature and the championship settles back into a more normal routine, it could be that such swings in form are something we don’t see as much in seasons to come. So SUPER GT fans would be well-advised to savour this weekend’s finale, because it could be quite a while before there’s another one like it. 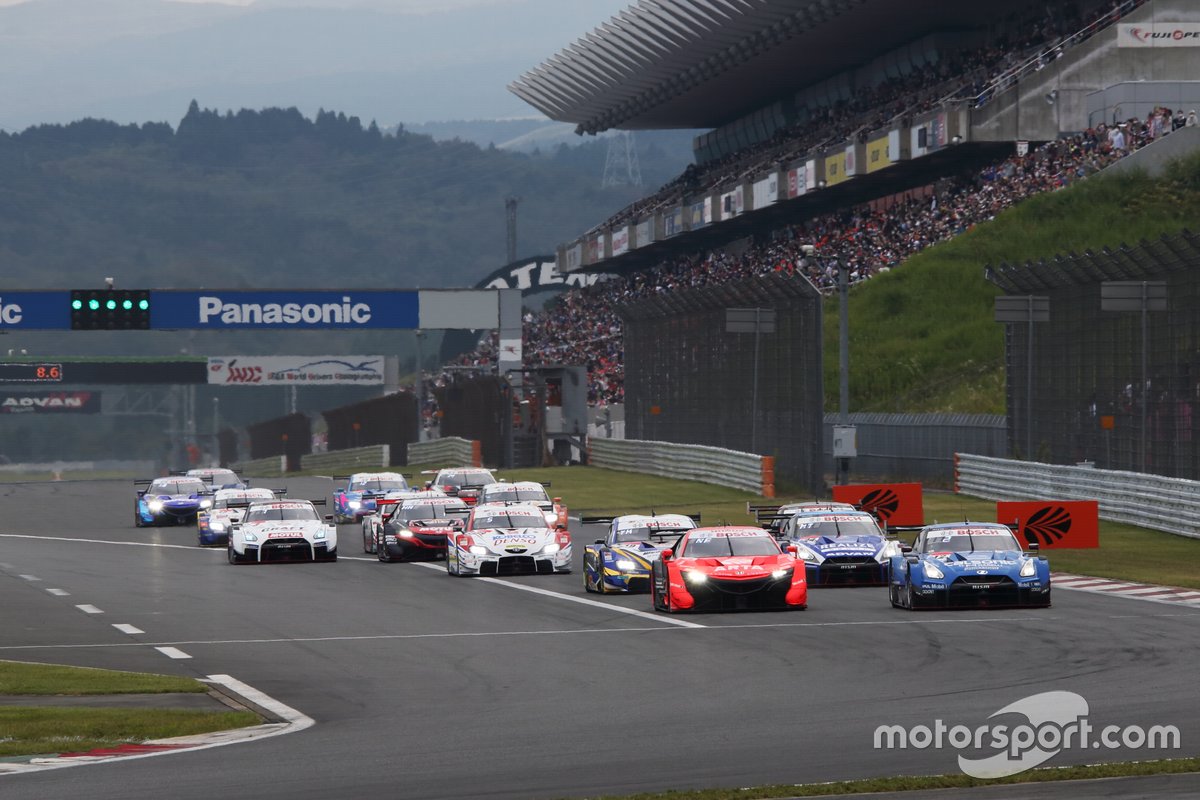 Goodsmile Racing’s Tetsuya Kataoka feels the Mercedes-AMG GT3 Evo has “no chance” of victory in SUPER GT with its Balance of Performance at tracks other than Fuji.

Ex-Formula 1 racer Roberto Merhi will be forced to miss an hour of practice time for the next SUPER GT round at Suzuka after earning two penalties last time out at Fuji Speedway.

SUPER GT has revealed a 2023 calendar made up of eight races bearing a strong resemblance to this year's schedule.

Ritomo Miyata believes saving fuel during the second stint of Sunday’s Fuji SUPER GT race was the key to he and TOM’S teammate Sacha Fenestraz taking their first GT500 win.