Ito and Oshima dominate Sugo GT 300km for the victory 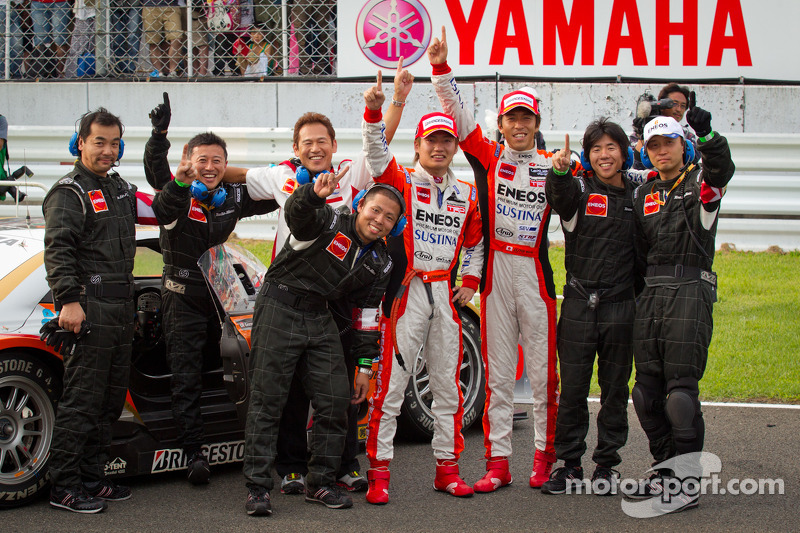 The “SUGO GT 300km RACE,” Round 4 of the AUTOBACS SUPER GT, took place at Sportsland SUGO (one lap: 3.704 km x 81 laps) in Miyagi Prefecture on July 29. ENEOS SUSTINA SC430 (Daisuke Ito/Kazuya Oshima) started from the pole position and went on to put up a victory. It’s the first victory in nine years for the team, and the first for Ito with this team after moving there in 2008. Tears filled the eyes of the drivers and members of the staff.

The Sportsland SUGO was wrapped in summer heat, but a squall dumped rain on the track an hour before the beginning of the final race, which sent all the teams scrambling. Fortunately, the rain stopped after about 15 minutes, and by the time of the start of the championship at two o’clock, the wet circuit had dried so the race was held under dry conditions. 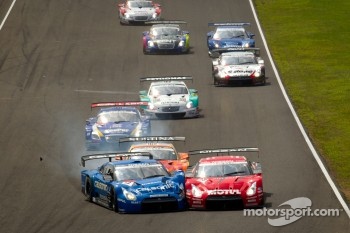 The ENEOS SUSTINA SC 430 (Daisuke Ito) started from the pole position, and just before the first corner was running neck-and- neck with MOTUL AUTECH GT-R (Satoshi Motoyama) and CALSONIC IMPUTL GT-R (Joan Paulo de Oliveira) who took second and third in qualifying. But the CALSONIC GT-R pushed too hard and made contact with the ENEOS SC430. The CALSONIC GT-R lost control and got wrapped up with the MOTOL GT-R on the outside forcing both machines out at the first corner. This was the end of the race for these two GT-R contenders for the championship. The ENEOS SC430 suffered some damage to the right front of the machine, but it never affected the pace of the race, and kept its position at the top.

After that, the ENEOS SC430 fought off challenges from last year’s champion car, the S Road REITO MOLA GT-R and from the same Lexus SC430 of PETRONAS TOM’S SC430, but Ito and Oshima, who took over the driving in the latter half, fought off all rivals to clear the 81 laps with their solid driving. They achieved a brilliant pole-to-win finish (from first in qualifying to victory).

Today’s winning Team LeMans captured the driver’s title in the GT500 class in 2002, but in spite of being a powerful team, had not won a race since 2003 at SUGO. This is their sixth victory overall. And was the tenth for Daisuke Ito who had not won a race since driving a Honda NSX in 2007. It was Kazuya Oshima’s third victory overall in GT500 competition. The Lexus SC430 has won three of the four races so far this season. 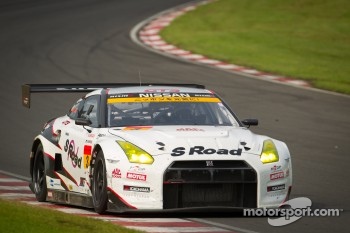 In the GT300 class, S Road NDDP GT-R (Yuhi Sekiguchi/Katsumasa Chiyo) took sixth position in qualifying and went on victory. It’s the second victory for Sekiguchi in this class, and a happy first victory for Chiyo who made his GT debut this year as well as for Nissan, which is fielding its Nissan GT-R with FIA GT3 Specs in the GT300 class this season.

The MUGEN CR-Z GT based on the Honda CR-Z became the second hybrid machine to participate in the GT300 class from this race. The first showdown between it and the apr HASEPRO PRIUS GT, which has been taking part since the season opener, drew quite a bit of attention. At one point the Prius was in the lead, but the tires that were changed early could not hold up in the latter stages, leading to a disappointing finish in 8th. The CR-Z got as high as 5th in the early stages of the race, but experienced machine trouble and finished its debut race in 16th . (Attendance: 27,500)

Daisuke Ito: “I could actually feel that a lot of improvements have been made in the machine’s potential since Malaysia (Round 3, Sepang), and to stay in contention for the title, I thought that no matter what, we had to win this time. It’s been a while since the team won, and a while for me, too, so I’m really happy. Since moving to the Lexus camp in 2008, everyone at ENEOS has given the team a lot of support, but we’ve had some difficulty presenting them with a victory…today, finally, we’re able to give them that present.”

Kazuya Oshima: “Up to now while driving my stint, my pace often fell off, and when handing the wheel over to Daisuke (Ito), we dropped in position. When that happened, I hated going back to the transporter through the ENEOS (hospitality) tent. This time Daisuke drove the first half, and I felt some pressure because he was handing over the wheel in a good position, I drove all out until reaching the top position, then backing off to save the tires to take the checkered flag. It was a relief to get the victory.”

Yuhi Sekiguchi: “So far this season fourth place at Round 3 in Sepang has been our best finish, in spite of its speed, we haven’t been able to put up any results, so being able to produce this win makes me very happy. The engineers ran a lot of simulations this time whether to change two tires or four tires; we decided on changing two tires, and the machine was set up perfectly for that, something for which I am very grateful to the team. From here on out, we will do our best to win each and every race, with our sights set on the series title.”

Katsumasa Chiyo: “I thought this time for sure we were going to win, because we haven’t been able to put up any results from the season opener until now. My best times in the official practice were a little off, and 6th in the qualifying seemed to make it a long road to victory, but the pace from official practice to the race was good, so we could decide on the two-tire change strategy. The team put together a great machine for us, and I was able to drive to save the tires, meaning that we were finally able to put up a good result. I am truly happy.”