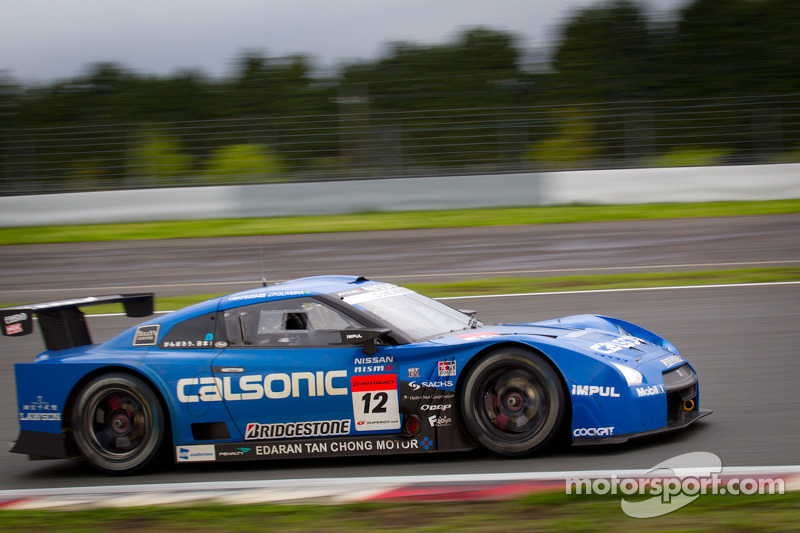 The qualifying for the FUJI GT 300km Race, Round 6 of the 2012 AUTOBACS SUPER GT series, took place at Fuji Speedway (one lap 4.563km) in Shizuoka Pref. on Sept. 8th. In the GT500 class the pole position was won by the CALSONIC IMPUL GT-R driven by Tsugio Matsuda and Joao Paulo de Oliveira. This gives the CALSONIC IMPUL GT-R team the right to start from the front position in the race on the 9th.

The qualifying for this round was held in a “knock-out” format. In this system the qualifying is run in three sessions (Q1, Q2, Q3). In the first two of these sessions the teams unable to qualify above the cut-off point are “knocked out” of the competition and not able to move on to the next session and their places on the race starting grid are decided at that point by their time trial results.

Although rain was expected this day at Fuji Speedway, it turned out to be a cloudy Saturday with not rain and relatively comfortable temperature. In the first qualifying session (Q1) the winner of the last round at Suzuka, the S Road REITO MOLA GT-R (Ronnie Quintarelli) recorded the fastest time. CALSONIC IMPUL GT-R (Joao Paulo de Oliveira) that had performed so well in the morning practice session followed with the second fastest time, setting up a GT-R showdown for the qualifying.

In the second qualifying round (Q2), however, the Lexus teams showed their prowess on the Fuji track, a Toyota home circuit. The ENEOS SUSTINA SC430 (Kazuya Oshima) and the PETRONAS TOM’S SC430 (Loic Duval) recorded the 1st and 2nd fastest times while the CALSONIC IMPUL GT-R (Tsugio Matsuda) only managed to run the 7th fastest time and barely made the top ten to qualify for Q3.  In that final session, Q3, the competition for pole position was once again a dual between two GT-R machines. When it was over the fastest time of the day, a 1’32.990, was run by De Oliveira in the CALSONIC IMPUL GT-R, beating out last year’s champions and winners of the last round, the S Road REITO MOLA GT-R, for the pole position.

This was the first SUPER GT career pole position for Joao Paulo de Oliveira. For the team it was the seventh SUPER GT pole and its first since round four of the 2010 season at Sepang. For the Nissan GT-R this is the second pole of the season.

In the GT300 class, the Porsche 911 GT3 was expected to have an advantage on Fuji’s high-speed course, but in the third session (Q3) it was the apr HASEPRO PRIUS GT driven by Koki Saga that made a super run to beat the course record with a time of 1’40.417 and grabbed the pole position in the end. Although the laurels for a first hybrid car pole position went to the MUGEN CR-Z GT in the last round at Suzuka, it was a proud showing for the Prius at the home Toyota course here at Fuji.

For the Toyota Prius making its SUPER GT debut this season, this is the first pole position, as it was for its driver Koki Saga. Also, following the pole position won by the MUGEN CR-Z GT in the last round at Suzuka, this makes the second consecutive GT300 class pole for hybrid cars.

Joao Paulo de Oliveira: “The car had been in very good condition since the morning practice, and through the Q1 and Q2 sessions the balance had been getting progressively better. I feel great about getting my first SUPER GT pole position with this. But, since we have come to this circuit with the objective of winning the race, the important thing is how we do in the race tomorrow. It will be a 300 km race this time, which is considerably shorter than last round’s 1,000 km race at Suzuka, so we can’t afford to make any mistakes. I will be trying to get us a win tomorrow so that we can stay in contention for the season title.”

Koki Saga: “This is just too good to be able to come from behind and win the pole position with a course record here at Fuji, which is a course that personally I have never considered one of my better courses (grimace). In our case we have the difficulty of racing with a hybrid machine, and like at the last round at Suzuka, we have had some problems in areas other than the hybrid’s performance. It has been an uphill climb until now, so I am especially happy to get this pole position. When I got back to the pit after my run and saw my teammate driver [Morio] Nitta’s eyes welling up with tears, I started to get a bit emotional myself too. But, winning a pole position doesn’t get us any season points, so we have to work hard to do well in tomorrow’s race.”

Matsuda and de Oliveira earn first win in 2012 at Fuji