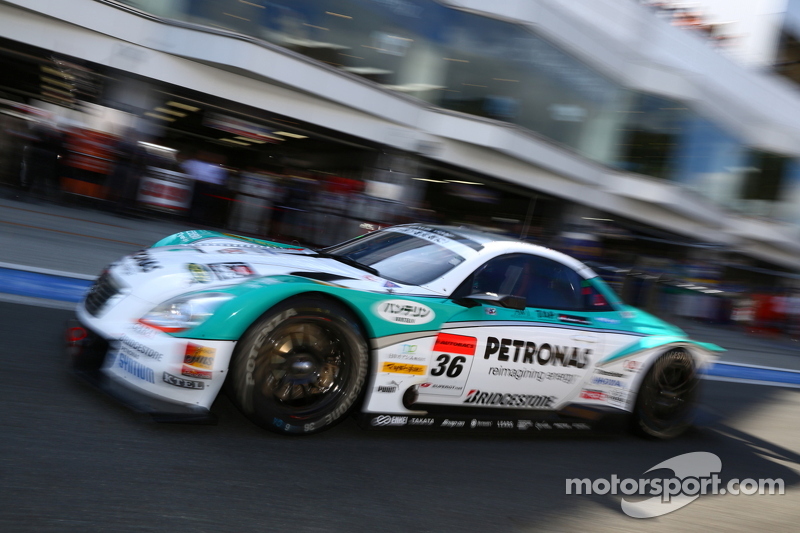 Unlike the regular season SUPER GT series races competed by a relay of two drivers for each machine, this event is competed in two races on the 17th and 18th with each driver driving the entire race. The final team standings for the event are determined by the point totals of each team’s two drivers in these two races. For this reason the driver for each race also drives the respective qualifying round. 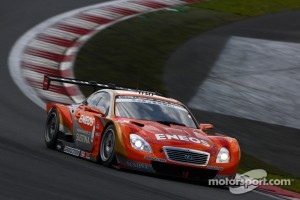 On this day, Fuji Speedway was blessed with fine weather for racing. The qualifying for Race 1 found the LEXUS SC430 machines performing strongly. The qualifying turned into a showdown between Kazuya Oshima in the ENEOS SUSTINA SC430, Loic Duval in the PETRONAS TOM’S SC430 and Kohei Hirate in the ZENT CERUMO SC430 competing for the fastest lap time. Of the three, Ohshima broke the existing course record of 1’32.481 with a time of 1’30.730 to win pole position. Although Oshima has three pole positions to his record in the SUPER GT series races, this is his first in the FUJI SPRINT CUP.

In the Race 2 qualifying it was the SC430 machines again that dominated. In this qualifying it was Kazuki Nakajima, fresh off an October win in World Endurance Championship (WEC) here at Fuji driving the Toyota TS030 HYBRID prototype car, who emerged with the pole position driving the PETRONAS TOM’S SC430 to a fastest time of 1’30.966. This was his first PP in SUPER GT competition.

No. 6 ENEOS SUSTINA SC43 Kazuya Oshima: “From the feeling I got running in the morning practice, I never expected to be able to run this fast in the qualifying. Although it was 2nd fastest car, in the official practice I had run with some interference from the car in front of me, so I thought I still had a chance to go for top position. After that we made almost no changes in the machine settings, but the machine performed well and the tires fit the conditions well too. During the SUPER GT season we had machine trouble and happenings that kept us from getting good results, but I think today’s is the kind of result we can get when things go well.”

No. 33 HANKOOK PORSCHE Tomonobu Fujii: “In the official practice I didn’t feel it, but in the afternoon’s official qualifying (after so many laps had been run by the cars) there was more rubber on the track and it felt very good. Having suffered the disappointment of losing the championship in the last round of the [SUPER GT] series after going into it as the point leader, and after coming from behind to take the lead in last year’s Fuji Sprint Cup late in the race only to be passed again near the end, this time I really want to win the race.”

No. 36 PETRONAS TOM'S SC430 Kazuki Nakajima: “The machine ran better than I thought it would. I am grateful to the team for this. In the last race of the [SUPER GT] series at Motegi, our heavy load of handicap weights kept us from getting good times, but I felt that I could have gotten better times. Since Loic [Duval] had run good times, I knew it was going to be a close battle, so I was determined not to make any mistakes. Last year I made a big mistake at the start, but this year I want to get a good start and run away to victory.”

No. 33 HANKOOK PORSCHE Masami Kageyama: “I felt pressure knowing that Fujii (who won the pole position for Race 1) was watching me. But, no matter who drives [this car] it gets good times. How about it, everyone? Don’t you want a Porsche (laughs)? Anyway, I was determined to win the pole. This is a good result to take us into next year. About my race on Sunday? To keep from getting caught up in the confusion, I want to dash into the lead from the beginning and run away to the win.”

"Super GT was not in my plans at all, but it was an amazing experience" - Cyndie Allemann