Makino fastest for Honda at Fuji, Nissan in trouble

On the first day of track action since the opening test at Okayama in March, before the global coronavirus pandemic placed the season on hold, ex-Formula 2 driver Makino posted a 1m27.870s at the wheel of Team Kunimitsu’s #100 Honda NSX-GT.

All the leading times were set in the final 10 minutes of the two-and-a-half-hour afternoon session, when the faster GT500 cars had the track to themselves.

Sho Tsuboi had held the top spot for most of the session up to that point in the #14 Cerumo Toyota Supra that went quickest in the morning session in the hands of Kazuya Oshima.

But Tsuboi was one of only a handful of drivers to not go quicker in the afternoon session, as first Ukyo Sasahara (Mugen Honda), Nirei Fukuzumi (ARTA Honda) and Ryo Hirakawa (TOM’S Toyota) all enjoyed brief stints at the head of the timesheets.

Makino then set the quickest time of the day just after the chequered flag fell, with Sacha Fenestraz making a late move to second in the second TOM’S Supra but falling just 0.034 seconds short of the pace.

Koudai Tsukakoshi was third-fastest for Real Racing Honda, a further 0.069s behind. Tsukakoshi shared the #17 NSX-GT with SUPER GT rookie Yu Kanamaru, who was deputising for the absent Bertrand Baguette.

Another substitute driver, Kenta Yamashita – filling in for Heikki Kovalainen in the SARD Toyota – was fourth-fastest, while Hirakawa ensured it was three Toyotas in the top five. 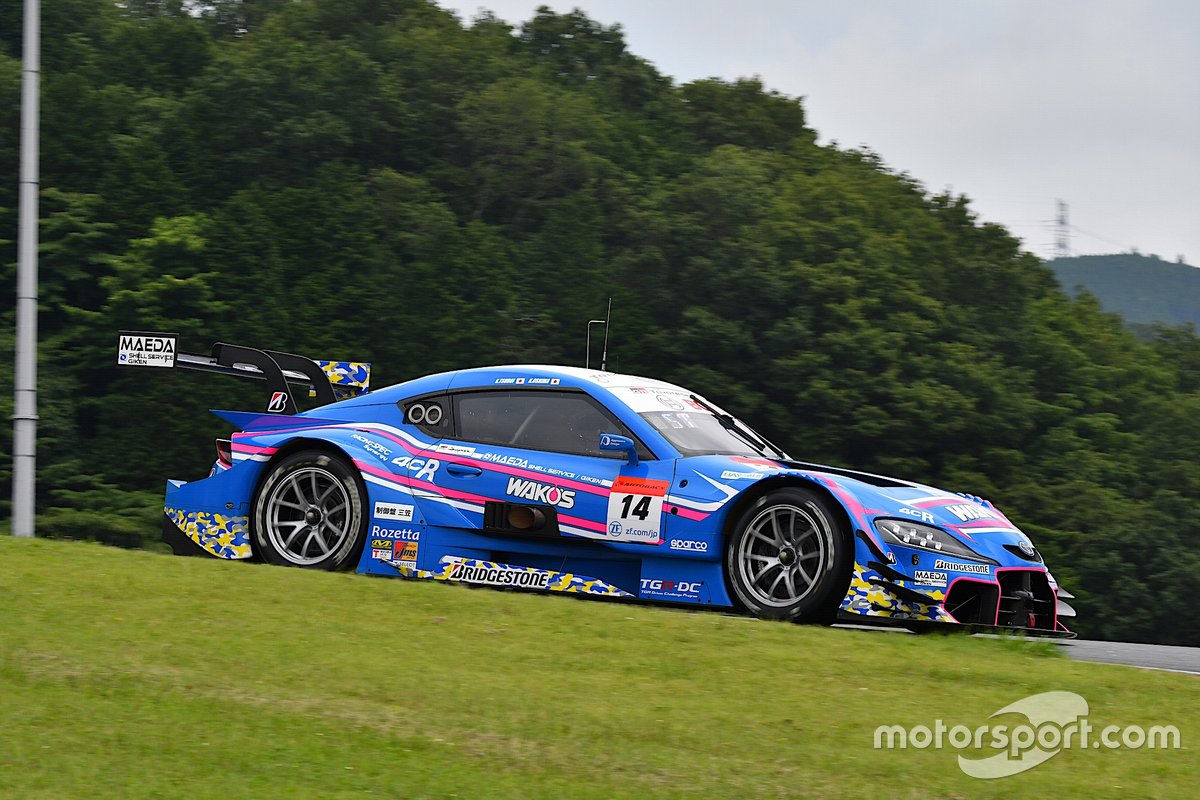 Fukuzumi and Sasahara were shuffled back to sixth and seventh places respectively ahead of the best of the Nissan drivers, Jann Mardenborough in the Kondo Racing GT-R.

Nissan endured a troubled return to SUPER GT action, with its quartet of GT500 cars responsible for causing three of the day’s five red flags.

The #3 B-Max Nissan caused the first interruption in the morning, coming to a halt at Turn 12 late in the first hour, before both the Impul and Kondo Nissans stopped on track at the same time after an hour of afternoon running. The Kondo Nissan then hit trouble for a second time roughly an hour later, causing another stoppage.

The morning session was topped by the #14 Toyota of reigning SUPER GT champion Oshima, who clocked a 1m28.482s just prior to the second red flag interruption of the day, caused by one of the JLOC Lamborghinis stopping.

That was enough for eighth overall, eclipsing Hiroaki Ishiura in the sister #38 Cerumo Supra by 0.233s, as Ishiura set his best time with just six minutes left of the two-hour session.

Nissan driver Ronnie Quintarelli’s early benchmark of 1m28.848s was good enough for third ahead of another late improver, Yuhi Sekiguchi in the #36 TOM’S Supra, and the Impul Nissan of Daiki Sasaki. Best of the Hondas was ARTA newcomer Fukuzumi in sixth.

Fastest in the GT300 class was the #34 Drago Corse Honda NSX GT3 of Australian driver Jake Parsons, who set a best time of 1m37.412s in the closing stages of the afternoon.

Nobuteru Taniguchi was just 0.009s adrift in the #4 Goodsmile Racing Mercedes-AMG GT3, followed by the LEON Racing Mercedes of Naoya Gamou another 0.024s back.